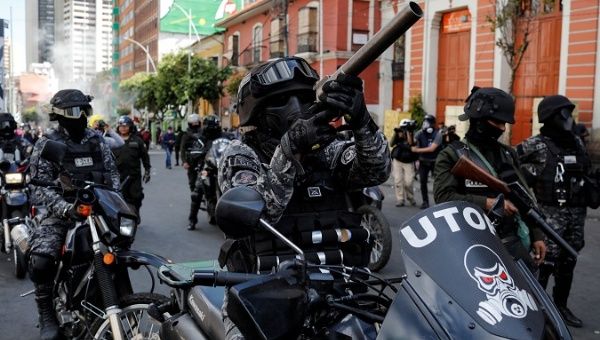 Former President Evo Morales leaked a document that reveals what the police officers aspired to do.

Bolivia’s former President Evo Morales on Monday revealed an official document in which the commander of the police requires Jeanine Añez administration to meet the wage increase commitments that would have been acquired at the time of the police mutiny on November 8, an action which facilitated the consolidation of the coup d’etat.

The leaked document, which is a copy of an official note sent by Colonel Rodolfo Montero to the Interior Minister Arturo Murillo on November 25, refers to the “wage leveling proposal for police officers” who aspire to have their salaries and benefits equated to those that the military are entitled to.

Besides having the official police seal, the letter is clearly signed by the officer who led the mutiny hours before President Morales was forced to resign.​​​​​​

This information similar to the data presented in a story that the Brazilian press leaked in mid-November, which is also related to the behavior of the Police and the Army during the coup.

A few days after the coup, Bolivia’s Army general Williams Kaliman, who ordered the resignation of Evo Morales, fled to the U.S. with a million dollars.

According to outlet Forum, Bruce Williamson, the U.S. Charge d’Affaires in Bolivia was responsible for donating one million dollars to each military chief and 500 thousand to each police chief.​​​​​​​

Meanwhile, the coup-born government on Monday continued its campaign of political persecution against people who worked with former President Morales.

The self-proclaimed interim president Añez ordered the apprehension of former Presidency Minister Juan Ramon Quintana, who is charged with the alleged crimes of terrorism and sedition.​​​​​​​

Featured image: A member of the riot police aims his weapon during a protest in La Paz, Bolivia Nov. 21, 2019. | Photo: Reuters