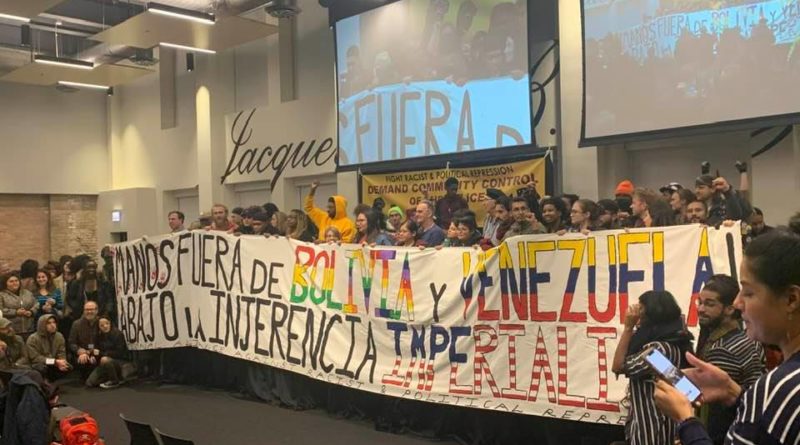 Chicago, IL – More than a 1200 joined together for an historic gathering on the weekend of November 22 – 24, at the hall of the Chicago Teachers Union, to refound the National Alliance Against Racist and Political Repression. The newly refounded Alliance will concentrate its efforts on building the fight against police crimes and for community control of the police, and it will campaign for the release of political prisoners and the wrongfully convicted.

Longtime leaders of the Black liberation movement Angela Davis and Frank Chapman, along with elected officials, trade unionists, and other progressive activists addressed the packed Nov. 22 rally that opened the conference.

Frank Chapman, the Co-Chair of the Chicago Alliance Against Racist and Political Repression and conference organizer, told the enthusiastic crowd, “We know why we have come here tonight. We are here because we all know and realize that we have come to the point that we have to make a renewed and powerful commitment to end, to overturn the regime of racist and political repression perpetrated against our people by those outlaws who currently occupy the White House and their cohorts here in Chicago, in Saint Louis, Minnesota, Baltimore and over a hundred cities and 28 states represented in this hall tonight.”

Conference participants attended workshops and formulated strategies to achieve police accountability and community control of the police, fight to free political prisoners including the wrongfully convicted, advance the struggle against racist and anti LGBTQ violence. Family members who have lost loved ones to police violence shared their stories and discussed their efforts to get justice.

Conference participants unanimously elected Frank Chapman to serve as the interim executive director of the Alliance and created a Continuations Committee that will work to develop the organization.

RELATED CONTENT: What They Say and What They Mean

The National Alliance Against Racist and Political Repression was initially formed in 1973 and was a powerful force in pushing back against the political repression of those times. Conference organizers vow the refounded Alliance will build on the proud history.

Frank Chapman states, “We did not call you to this refounding conference of the National Alliance Against Racist and Political Repression to commemorate or celebrate what we did 46 years ago. We called you here to join us in rededicating ourselves to defend the inalienable democratic right of our people of oppressed nations and workers to rise up and overthrow their oppression in this present moment of history.”