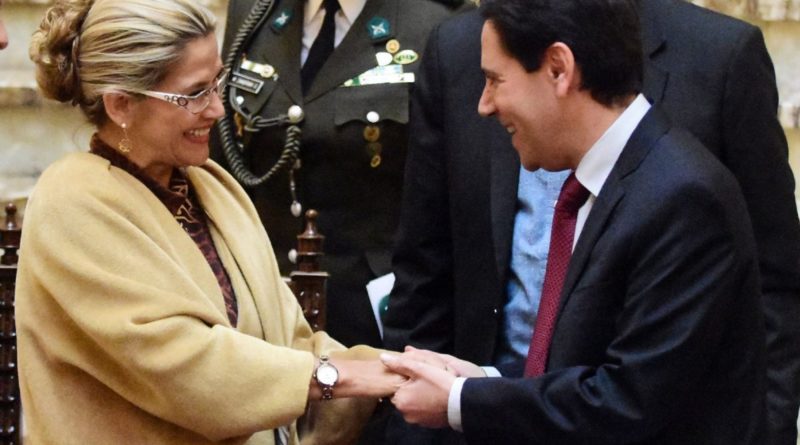 Bolivia’s Supreme Electoral Tribunal (TSE) announced that new presidential elections will be held on May 3, 2020. In the current conditions, the elections only seem to have the intention to disguise the de facto government as a democratic one. Its visible face is the self-proclaimed president Jeanine Áñez, the neofascist leader Luis Fernando Camacho, ex-president Carlos Mesa and the secretary general of the Organization of American States (OAS) Luis Almagro. Behind the local bishops, in an evident strategy of recolonization, the coup has the clear stamp of the United States government.

According to the Argentinean newspaper La Nación, “Foreign Minister Felipe Solá and the Secretary of Strategic Affairs, Gustavo Beliz, received a delegation from the United States government yesterday at the Casa Rosada, who conveyed their discontent with the public agenda being developed in Argentina by former Bolivian President Evo Morales.

In a clear demonstration of their interest in sustaining the de facto government in Bolivia, and with enormous impudence, the envoys from the U.S. Embassy told the right-wing and conservative Argentinean newspaper: “We call on the administration of Alberto Fernandez to work to ensure that Morales does not abuse his status in Argentina”.

The role that the coup leaders coordinated by the U.S. government are attempting to attribute to Bolivia’s Supreme Electoral Tribunal and the May 3 elections would be to whitewash the de facto government.

After the November 10 coup d’état against Evo Morales, the de facto government dismissed and imprisoned the members of the TSE. New authorities were then appointed to that body. These authorities were presented by the right-wing government as a guarantee of transparency, but, as often happens in such cases, the official propaganda of dictatorships is far from reality.

A clear example of this is the case of Salvador Romero, appointed as president of the TSE by the government of Áñez. Romero appears in several cables revealed by WikiLeaks in which his close ties with the US State Department and the US Agency for International Development (USAID) are exposed.

It is well known that USAID’s role (as well as that of the National Endowment for Democracy – NED), is as a body through which the American intelligence services (especially the Central Intelligence Agency – CIA) channel funds or execute operations to destabilize popular movements and to support their puppets abroad.

The cables exposed by WikiLeaks show how – at least since 2008 – Salvador Romero had close ties to US Embassy officials, also how he was promoted in talks against the government of Evo Morales, which were sponsored by USAID, and how he had initiated a campaign against the government and against the Movement Towards Socialism (MAS) to try to influence the next referendums and the presidential elections.

Romero was characterized as a fervent militant against the new Bolivian Constitution promoted by Evo Morales and it was the Bolivian president himself who at the time pointed out that the then National Electoral Court (CNE), which was presided over by Salvador Romero, was a body subordinate to the United States Embassy (Romero had been appointed to head that body in 2003 by then President Carlos Mesa, another of the figures responsible for the coup of 10 November 2019).

In a dialogue with Contexto, Stella Calloni, author of the book Evo en la mira – CIA y DEA en Bolivia (Evo in the Crosshairs – CIA and DEA in Bolivia), said: “the de facto government is purging Bolivia’s electoral rolls. Those lists had previously been purged. Everything indicates that this is a strategy to remove from the electoral rolls thousands of indigenous people who had recently obtained their identity cards and who are known to support the MAS. In addition, a lot of money has been circulated to co-opt leaders and divide MAS”.

“The typical U.S. strategy of destroying the people’s processes and rigging elections has been set in motion. A strategy that tries to give a democratic makeup to a puppet government,” she said.

Calloni remarked that “This has already happened in Honduras where, after the coup d’état against Manuel Zelaya, there was one fraud after another, all directed by the United States and endorsed by OAS Secretary General Luis Almagro”.

“There was also a similar strategy in Brazil. There, after the coup d?etat against Dilma Rousseff, the de facto president Michel Temer called for elections in which not only was the main candidate Luiz Inacio “Lula” da Silva banned, but since the whole electoral process was in the hands of the coup government, there was no guarantee of transparency and they were able to impose the candidate who represented the continuity of the coup, Jair Bolsonaro”, she said.

According to the specialist, “now the de facto government of Bolivia is calling for elections, but there are cables that show that the people who were imposed on the Supreme Electoral Tribunal respond directly to the United States Embassy and its agencies such as the CIA and USAID”.

“They have prepared a typical scenario for fraud in favour of the sectors that respond to Washington, which is why after the coup the entire North American structure in Bolivia was restored, a structure that, in an act of sovereignty, had been expelled by President Evo Morales,” concluded Calloni.