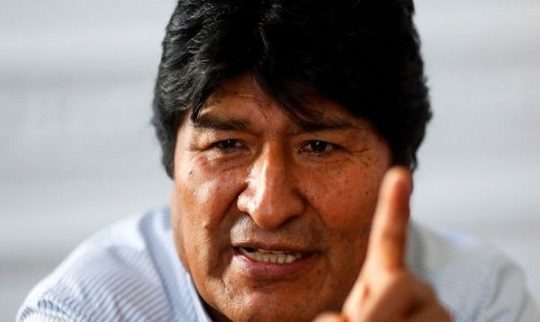 Bolivia’s legitimate President Evo Morales has accused the de facto Government in his country of acting with “savagery,” particularly in regards to the repression against the population last November after the coup d’état was staged against him.

“During my Administration, during conflicts, no person was shot to death. From November 11 to 20, coup mongers shot over 30 people to death and caused 400 injured. That is their savagery. For me, the right to life is above any other right,” Morales said in his Twitter profile.

In another message, the Bolivian leader accused former right-wing presidential candidate Carlos Mesa of attempting to orient the population towards a nonexistent fraud, when Morales was declared winner in the October 20th elections.

“On October 21, Mesa called for ‘mobilizations,’ using the nonexistent ‘fraud’ as a pretext. It was just an excuse to stage the coup,” stated Morales, who was granted asylum in Argentina and is waiting for the status of political refugee.

“Provincial Electoral Courts were burnt and they are going to be rebuilt by the USAID now. A panhandler State coming back the same as in Mesa’s times,” he added.

Meanwhile, Interior Minister of the de facto President Jeanine Añez, Arturo Murillo, expressed his gratitude for the interest showed by the U.S. agency to “support” his country. The USAID expressed its desire to “support” the South American country after six years of being expelled by the Evo Morales Administration.

The USAID has been accused by experts of contributing through NGO’s and private organizations to create opposition political parties aimed at hindering Morales’ presidency, as well as supporting counterinsurgency programs among peasant sectors.

In a series of messages, Morales criticized the coup mongers a few days ago and defended the measures he implemented during his 14 years in power, such as nationalizing natural resources, fighting poverty, and achieving the best economic growth in Latin America.

Last January 4th, Añez asked for Bolivians to prevent the return of “savages” to power, referring to Evo Morales, the first indigenous President in the country. “Let’s not allow any personal ambition, on the one hand, disperses the vote and that he wins again. Let’s not even allow the arbitrary, the violent and the savage return to power. I think that it is the responsibility of all of us,” Añez said.

“For the coup mongers, we are ‘savage’ because we support nationalization because we recovered our natural resources and the Homeland’s dignity because we fought poverty and achieved better economic growth in the region,” Morales added.

“The Añez dictatorship, together with (Luis Fernando) Camacho and (Carlos) Mesa, is surpassing its limits of cynicism and insolence. They are now meddling in Venezuela’s domestic affairs and its institutions, exposing that they are just a vulgar extension of the erratic foreign policy of the U.S.

Venezuela’s National Assembly voted a new board of directors last Sunday and it is now in hands of moderate opposition groups, to the detriment of the previous board headed by Juan Guaido.

However, Bolivia’s de facto Government headed by Jeanine Añez questioned the legitimacy of the new board and its electoral process when they are claiming power through no process at all.