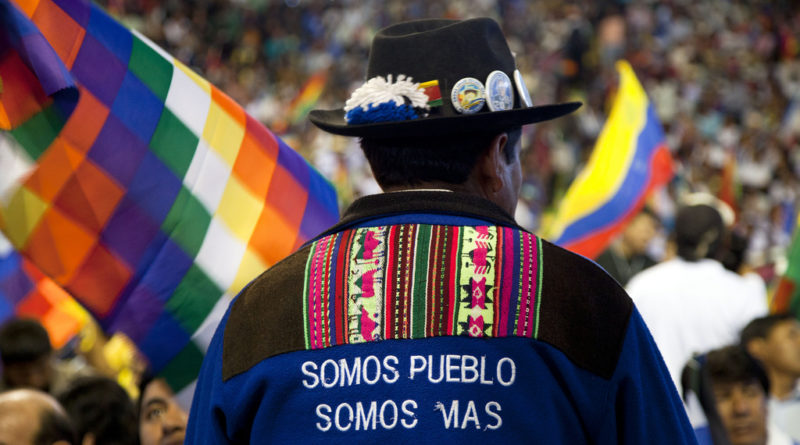 A relevant article by Thierry Meyssan has been published that reveals the deep historical fascist/catholic links leading up to the coup in Bolivia and the danger that may lie ahead as a result. It is important to be aware of this in order to provide informed solidarity with the people of Bolivia and a sharper analysis of the inevitable US intervention in Latin America.

However, we take issue on some of Meyssan’s statements leading up to his main story.

We question his statement that this “was not exactly a coup d’état, but a simple overthrow of the constitutional president.” One could debate on the semantic difference between “coup” and “overthrow”. Ultimately, their intent is indistinguishable. In fact, this is how the Encyclopaedia Britannica defines coup: “Coup d’état, also called Coup, the sudden, violent overthrow of an existing government by a small group. The chief prerequisite for a coup is control of all or part of the armed forces, the police, and other military elements.” This is precisely what happened in Bolivia. Meyssan himself refers to the coup perpetrators as “putschists” later in his article.

Another issue we find hard to believe is Meyssan’s statement, “the United States of America, which is pleased with the turn of events [coup], has not provoked them.” It’s obvious that this cannot be proven or disproven with solid evidence. But we need to ask, has there been any similar coup in Latin America in modern times where the US has not been involved directly or indirectly? Are we to believe that this is an exclusively domestically-driven coup in a region where the US has so much at stake politically and economically, and that closely monitors and controls?

Truly we do not see any difference between the US regime change drive in Venezuela or in Bolivia aside from the force and openness of the push, the timing or the circumstances of the events.

We do happen to believe that the US is in the initial stages of a decaying empire, but even recognising that “the US State Department is a field of ruins”, it is hard to accept, yet, this level of decay based on what we see in terms of US penetration and interventions in the region via its hybrid war toolkit. The unlikely alternative is to believe that a casual conversation between a Colombian diplomat and his foreign affairs boss is the proof of the US administration “incompetence” in Bolivia.

What Meyssan calls “The shadows of the past” is the real story behind the coup in Bolivia. It is a story that involves characters such as the Croatian Fascist-Nazi Ustashi terrorist group, the Catholic church and the CIA. The links between these parties are important to keep in mind.

Many Ustashi members fled to Latin America after World War II; some settled in Bolivia. They brought with them their capitalist and racist ideology with the blessing of the Catholic church in exchange for spreading Christian fundamentalism. One of the major opponents of Evo Morales is Luis Fernando Camacho, a wealthy lawyer from Santa Cruz, who has been associated with an anti-indigenous people group, the Santa Cruz Youth Union, believed to be founded by the “Bolivian Ustashi”. He has been reported to enter the government palace by force kneel in front of a bible resting on a Bolivian flag before supposedly delivering a letter of resignation to president Evo Morales. He may also be a vice-president candidate in the next election recently agreed on by the interim government of self-proclaimed president Jeanine Añez.

RELATED CONTENT: Evo the “Terrorist & the Weaponization of Fear-Mongering Labels

Santa Cruz is a Bolivian Eastern region where many Croatians have settled. It is mostly populated by European-descent people, is rich in gas and farmland resources, and has the reputation of having had a separatist vote in 2008 that the Morales government rejected as unconstitutional. Another figure with close ties to Camacho is also relevant in Santa Cruz. His name is Branko Marinkovic. Born in Bolivia to Croatian parents, he also retains Croatian citizenship. He is the president of the Federation of Private Industries in Santa Cruz and is a big rancher and land owner. “Rumour” has it that he has been involved in building a private militia, but when asked of course he denies it.

Undoubtedly the identification with the Catholic church has provided an appearance of legitimacy and acceptance of the Bolivian Ustashi and their associates that has fully been exploited by the CIA for its wider covert operations in Latin America in fighting Communism or any other socialist movement. We sadly concur with Meyssan, “the networks installed by the CIA in the 1950s to 1970s have beautiful [sic] remnants.”

After the military coup we are told that we are witnessing the fact that “a political current within Catholicism advocates violence in the name of God” in Bolivia. Far from being a new phenomenon, this violent religious fanaticism is not different from what the European colonizers did in Latin America centuries ago. Today, we cannot dismiss the fact that even in the remote possibility that the US did not “provoke” the coup it will definitely take advantage of the unstable political situation to reel the next government towards neoliberalism with fascist characteristics.