This Monday, January 2, the president of the National Assembly of Venezuela, deputy Jorge Rodríguez, received the keys to the headquarters of the Embassy of the Bolivarian Republic of Venezuela in Brazil from the hands of local social movements that, for more than three years, had protected the residence from attempts of aggression, siege, and attacks by fascism. Rodríguez, accompanied by the new Venezuelan ambassador to Brazil, Manuel Vicente Vadell, as well as the staff that works at the diplomatic headquarters, received the keys to the residence from João Pedro Stedile, Brazilian social leader.

In 2019, the Venezuelan embassy in Brasília was subjected to occupation attempts by right-wing groups supported by the government of Jair Bolsonaro. This happened almost simultaneously with a similar attempt against the Venezuelan embassy in the US capital. Besides their fierce defense of the “embassy protectors,” these attempts were reduced by US authorities in their twisted understanding of international rules.

“Comrades from Brazil, the world, and Latin America,” Stedile said, “today is a historic day for us, the popular movements of Brazil, who have been here for more than three years resisting so that Guaidó’s impostors would not take over this house that belongs to you, the people of Venezuela.” The Brazilian leader stated that they guarded the diplomatic headquarters with great pleasure and affection, as a sign of solidarity with Venezuela.

“It is only possible to build a great homeland as dreamed of by Martí, Che, Fidel, and Chávez, with the principle of solidarity,” he added, handing over the keys alongside a stone monument, which had inscribed upon it the names of all the popular organizations that accompanied this fight. “And, therefore, what we did here was just putting internationalist solidarity into practice, a symbolic way of also thanking you for the many ways you have always helped us.” 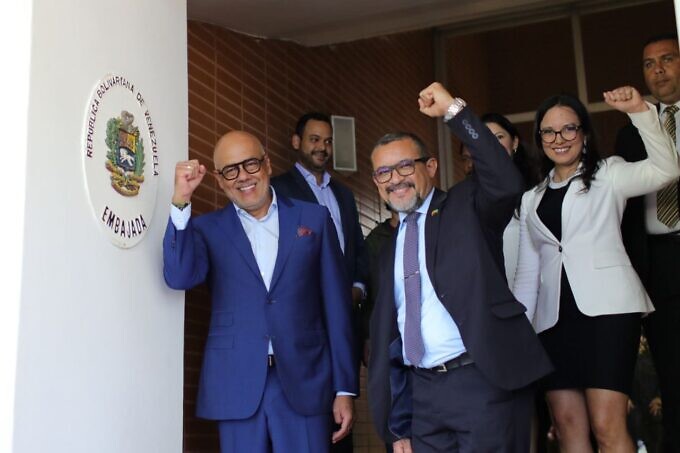 “It was a time of barbarism,” said Rodríguez, recalling the difficult moments that the Venezuelan embassy experienced during those years of siege. “A time in which all international standards were disrespected, all treaties, all the respect for the diplomatic immunities that the nations of the world owe us. It was a sign of pain, of barbarity. The ferocity that the ultra-right neutralized throughout the territory of Brazil was a sign of the pain that this noble Brazilian people had to endure, who today wake up with the hope of President Lula.”

The congressman, who is in Brazil as head of the delegation representing the Venezuelan government during the inauguration of President Lula, not only thanked the social movements but also the workers of the embassy, ​​who, for three years, remained strong but “prisoners of ignominy, of the right, of hatred and fascism.”

Not for a single moment did they think of abandoning their fighting trench, Rodríguez pointed out. “For three years they remained here,” he added, “and the people of Venezuela have to know that for three years, they were enduring the rigors of those who, violating any rule of international law and any rule of diplomacy, tried to undermine the dignity of women and men, whose dignity couldn’t be undermined.”

“I feel full of pride,” Rodríguez said, “to receive [these keys] from the hands of workers, peasants, the Landless Movement, the Abreu e Lima Anti-Imperialist Movement, the social movements which, during all this time, have been taking care of this space. Never, ever, not even in the years and centuries to come, will Venezuela forget this display of solidarity and accompaniment that you had for us.”

What Worries the US Most About Lula

Brazil, after Colombia and the United States, had been among the most belligerent countries with government actively promoting the failed US “regime change” operation against President Nicolás Maduro in Venezuela. Time has shown once again that the solidarity and strength of the Bolivarian Revolution and Chavismo are stronger that what fascist forces imagined.