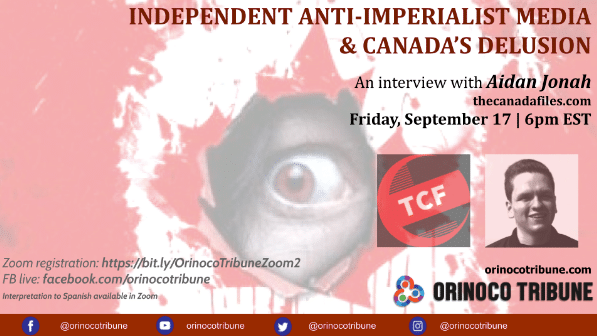 TCF, founded in 2019, is a socialist, anti-imperialist news website that focuses on investigative journalism on Canadian foreign policy as well as Canada’s local news. Jonah, a third-year Bachelor of Journalism student at Ryerson University, Toronto, Canada, writes about Canadian imperialism, federal politics, and left-wing anti-colonial resistance across the world.

While the United States’ destabilising role throughout the world is well recognised nowadays, Canada’s own remains hidden behind a carefully constructed image of a peaceful and social democratic nation with a “socialist” welfare system. Yet, Canada has a terrible track record regarding its foreign policy and in certain areas of its domestic policies. The Canada Files has published numerous investigative pieces exhibiting these contradictions.

Departing from the regular format of Chavista Chronicles, in this episode we asked Aidan eight questions ranging on topics such as The Canada Files’ journalism, Canadian foreign policy, the federal election in Canada, and the importance of anti-imperialist journalism in general. A summary of the questions and his responses are provided here.

1) What was the motivation to start TCF, and what are its main principles?

Aidan Jonah stated that the publication has moved a little away from reporting on more local Canadian news and that it is now “Canada’s foreing policy which is the [main] driving thing.” He let us know that TFC’s core principles are socialism, anti-imperialism, and a “firm resistance to militarism.” As for the motivation behind launching an outlet to expose the real nature of Canadian foreign policy, he responded that it “had to be done, and nobody else was doing it.”

2) A recent investigation of The Canada Files has minutely documented funding of Canadian NGOs and civil society organisations by Open Society Foundations, NED, and NATO in order to shape public opinion in Canada. How did the idea of this investigation come about?

Jonah gave a lengthy description of how the piece came about and how a major part of the report developed from an investigation into Open Society Foundations’ activities in Canada. According to TCF’s research, Open Society uses the Canadian NGO IMPACT to pass funds from Canadian International Development Agency (CIDA), a governmental organization, to Transparency International Canada and other civil society groups. Another Canadian NGO, Center for Law and Democracy (CLD), has been found to receive funds from a number of foreign government organizations including the CIA front NED; GIZ, the German equivalent of NED; the European Union; and even the Swedish, Danish, and Norwegian embassies in Canada. The funds were provided with the stated goal of “promoting democracy.” In this regard, Jonah pointed out what “democracy promotion” has meant in countries of the Global South, and warned that the US government could succeed doing the same in Canada if it so wanted. “Americans and Europeans are the greatest threats from abroad to Canada,” he emphasized.

3) On the same subject, please discuss the role of Uyghur Rights Advocacy Project (URAP) in Canada, and how the Uyghur genocide narrative has been weaponized by New Democratic Party (NDP) MP Matthew Green and a few other progressive human rights activists who have manipulated the Palestine solidarity movement to support the New Cold War on China.

Aidan Jonah explained that the Canadian NGO URAP, that openly declares its funding by the NED, has been the driving force behind the Canadian parliamentary subcommittee report (2020) that accused China of committing genocide against the Uyghurs in Xinjiang. The “genocide” narrative was already debunked by The Grayzone, MintPress News and a number of other news media when the parliamentary report was released.

TCF found that the subcommittee called upon to testify personalities and organizations like neo-Nazi Adrian Zenz, senior fellow of the Victims of Communism Foundation (that considers Nazis as “victims of Communism”); Human Rights Watch, the human rights organization known for its support of US-backed “regime-change operations” in Third World countries like the 2019 coup in Bolivia; and the NED-funded URAP.

In this regard, Jonah particularly stressed the destructive role of progressives like NDP MP Matthew Green, or Palestinian and Kashmiri rights advocate Azeezah Kanji, who have made false equivalence of the real ethnic cleansing of Palestinians by Israel and the suffering of Kashmiris perpetrated by the State of India with a “genocide” narrative in China that has been already disproved. He warned that levying accusations of genocide without adequate evidence against countries that are targets of US imperialism and weaponizing human rights to do so ends up dividing solidarity movements and strengthening imperialists.

4) Please discuss Canada’s role in the New Cold War against China. Is the Canadian foreign policy on this issue subservient to the US policy towards China?

Aidan stated that Canadian policy regarding China is indeed subservient to the US-led New Cold War: “It is America leading us on a string and we don’t have a truly independent foreign policy.” Yet, it would have been better for Canada—from the point of view of economy—to maintain better relations with China. He added that war with China would be suicidal for Canada from a military perspective also.

5) About 75% of the mining companies in the world are based or registered in Canada. These corporations regulate government policies in many countries of Latin America, and have also carried out interventionist activities against governments that are not subservient to their interests. How much influence do these mining interests have on Canada’s foreign policy?

Aidan Jonah called the Canadian resource extraction companies a “driving factor in Canada’s imperialist foreign policy in Latin America.” He explained that successive governments of Canada—irrespective of which party is in governing power—have advocated for these mining companies to be able to exploit without limit, and the CIDA has funded corporations that have forced governments to bring about deregulation of mining laws. In many countries these companies maintain their own paramilitaries that kill land defenders and labor union organizers, while the Canadian government sells arms and provides military training to governments that are known for violating human rights in order to protect Canadian mining interests. “Canada is these resource companies in a trench coat—that is the running joke here,” he added.

6) Recently, the US “ambassador” to Venezuela, James Story, declared that the US, Canada, and EU are working on imposing new sanctions on Venezuela if the dialogue in Mexico fails. What is your opinion on the matter?

Jonah stated that Canada wants to act like a “sledgehammer” in regard to the Venezuelan dialogue in Mexico City, especially that the Trudeau government had a central role in the creation of the Lima Group. Canada has been a main promoter of Juan Guaidó’s fake government, and the US “handpicked” Canada for this to legitimize the coup operation. Jonah remarked that “new sanctions against Venezuela are completely unacceptable,” and added that it is “an incredible show of discipline for the Venezuelan government to engage in talks with these opposition extremists, when in most Western countries, every single one of those people would be rotting in jail if they tried to do a quarter of that.”

7) In view of the early election in Canada, please discuss the internal political scene of the country, and the agendas of parties like NDP, Green Party, Communist Party, etc.

Jonah explained that all Canadian mainstream political forces like the Conservatives, the Liberals, NDP, and Green Party have similar policies on many issues and especially in foreign policy, although on the domestic front NDP offers moderate left, liberal solutions to housing, health, etc. In his opinion, the Communist Party of Canada is the only political formation that is opposed to war and militarism, and has provided real policies of investment in education, health, housing, etc. He also mentioned the importance of the Canadian social movements.

8) Canada has an image of being a peaceful country with a neo-socialist welfare system. Yet, both domestic and foreign policies of Canada are based on settler colonialism, racism, disrespect of Indigenous cultures, and extractivism. How has it been possible for Canada to sustain its official image, and what can Canadians do to bring about real change in Canada’s policies?

Jonah commented that the image of Canada is manufactured by mainstream media in conjunction with the mainstream political apparatus, NGOs, and think-tanks that “invent reality.” In addition, the “opportunist left political elite” works to “keep people within the box.” For Canadians to bring about real changes in their country, Jonah opined that there should be alternative media to provide proper information against mainstream media disinformation and propaganda, and that The Canada Files is working in this regard. He also insisted that Canadians should get involved in mass social movements aiming for total decolonization and sovereignty. “There is a willingness to settle for being made by history rather than making history itself… and this has to change,” he concluded. 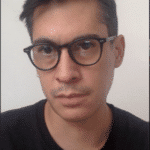