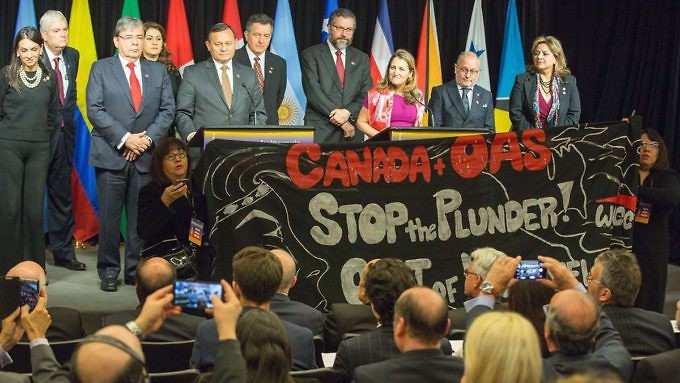 On February 20, the Trudeau government will host another meeting of the anti-Venezuela “Lima Group” in Gatineau, Quebec.

This comes on the heels of the Ottawa visit of Juan Guaidó, self-declared ‘interim president’ of Venezuela, where he was warmly received by PM Justin Trudeau and Foreign Minister Francois-Philippe Champagne.

The “Lima Group’ is a rump collection of right-wing and pro-fascist states in Latin America, including the Bolsonaro government in Brazil, the coup leaders in Bolivia and the ultra-right Iván Duque regime in Colombia, among others. The Lima Group, under the tutelage of their masters in Washington, has been coordinating the regime-change campaign against the duly-elected government of Venezuela.

The political, economic, media and paramilitary war on Venezuela and its people has included: (1) the imposition of punitive sanctions – effectively a blockade – against Venezuela in an attempt to cripple the domestic economy, and causing untold suffering and deaths among the civilian population; (2) the campaign to isolate Venezuela internationally, seizing its foreign assets, embassies and consulates abroad; (3) organizing and funding Guaidó and the so-called ‘opposition’ inside the country, including their attempted (and failed) coup on April 30, 2019; and (4) making thinly-veiled threats of direct military aggression against the sovereign state of Venezuela. All of these actions are in clear violation of international law and the UN and OAS Charters. Under the provisions of the Rome Statute of the International Criminal Court, these are war crimes and crimes against humanity.

Canada’s active interventionist role as an ally of the U.S. in this criminal campaign against the sovereignty of Venezuela is outrageous and unacceptable. The same ruling circles in Canada which are carrying out this imperialist agenda are responsible for anti-democratic aggressions at home, imposing colonial oppression against the Wet’suwet’en protests and on indigenous peoples’ rights elsewhere across Canada, attacking teachers in Ontario and trade union rights in general, and continuing its pro-corporate, austerity offensive against the living conditions and social programs of the people in general. With this record – at home and abroad – Canada does not deserve a seat on the UN Security Council which the Trudeau government is seeking.

For these reasons, we urge all peace and solidarity groups and committees, as well as labour, progressive and democratic organizations, to mobilize protests across the country on February 20 to condemn the Lima Group summit, and to demand that Canada withdraw its unilaterally and illegal sanctions against Venezuela, end its support for regime-change, and get out of the Lima Group. NOW!

Local groups in the Capital region, with support from Quebec and Southern Ontario, are preparing for a large protest in Gatineau itself on Thursday February 20th. We also are urging concerned groups and individuals to organize local actions – including protests and pickets at Liberal MP Constituency offices – in solidarity with the Gatineau demonstration. We hope that over the coming days, actions can be planned in many centers across the country to demand:

Lima Group – Out of Canada! Canada – Out of the Lima Group!
End the Sanctions on Venezuela NOW!
Restore full Diplomatic Relations!
No to Canadian Complicity in Washington’s ‘regime-change’ campaign!
Hands off Venezuela!