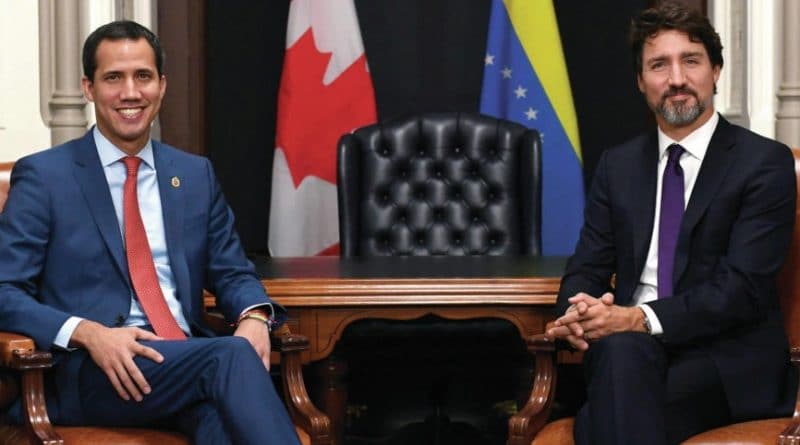 The Lima Group meets in Gatineau on February 20, 2020, across the river from Ottawa’s Parliament Hill. The group was originally established on August 8, 2017 in Lima, Peru. Twelve countries initially signed the declaration known as the Lima Declaration: Argentina, Brazil, Canada, Chile, Colombia, Costa Rica, Guatemala, Honduras, Mexico, Panama, Paraguay and Peru. The US is not a member. Since the original establishment, two and a half years ago, two other countries – Bolivia and Haiti – have joined, both now led by US/Western puppet governments. Trudeau was instrumental, along with Trump, in the coup d’état against Bolivia’s first indigenous President, Evo Morales, last fall, to install a new fascist “government.” Concerning Haiti, along with the US and France, Canada is a key player, through the CORE Group, in maintaining its control over Haiti. However, Mexico has since withdrawn, following its government swing to the left with a foreign policy independent of the US. The principal goal of the Lima Group is regime change in Venezuela against the Maduro government.

From the beginning (and even before Lima), the Trudeau government aspired to be the leading political force against Venezuela, with Colombia constituting its armed instrument. The Canadian government website dedicated to the “Venezuela Crisis,” since November 11, 2016 to date, boasts 97 Canadian, Lima Group and multilateral organization statements. They constitute a laundry list of imperialistic and arrogant demands, threats, ultimatums and sanctions. However, these 97 statements are just part of the Trudeau strategy. He uses his advantageous position of not being a Trump, and his ability to communicate in English and French, to assist Trump not only in Latin America, but also in Europe with success.

The Gatineau meeting is the third hosted by Canada: October 27, 2017 in Toronto; February 4, 2019 in Ottawa; and now Gatineau. With this meeting, it is Canada that has hosted the most meetings, even more than Peru. Yet, Canada is obviously the furthest country from any in Latin America. This is a testimony to the Trudeau’s infatuation with Canada’s “leadership” on Venezuela.

Why is Canada so involved against Venezuela? There are many reasons that this author, along with others, spell out with documented evidence in the course of the current International Speaking Tour on Latin America. However, let us deal with just one at this point. Trudeau is fighting to win a non-permanent seat on the United Nations Security Council for 2021–2022. He uses the Venezuela issue to prop up his visibility on the international scene. Furthermore, the Trudeau government is no longer discreet in its UNSC goal. On February 11, it announced that he will travel to Barbados to meet with Caribbean Community leaders in this way:

“As Canada pursues its candidacy for election to the United Nations Security Council in 2021–2022, we will continue to advance shared interests to benefit people and businesses in Canada, the Caribbean, and around the world.” (Prime Minister of Canada, news release)

The other countries vying for the seat are Norway and Ireland. The UN does not need another US ally such as Canada that is also called out by the UN for its genocide against its First Nations, while it fully supports Trump abroad. Anybody but Canada for the UN.

The trademark of the Lima Group is that it does not favour military intervention, but rather opts for a “peaceful solution” to the “Venezuelan Crisis.” Yet, among the 97 Canadian statements, we find Canadian sanctions that are considered in themselves a form of warfare, such as a study indicating that 40,000 Venezuelans lost their lives in 2017–2018 as a result of these US sanctions. Moreover, not one of the 97 statements call out the Trump administration for even its most severe sanctions that constitute an act of war, such as seizing ships in international waters ferrying food to Venezuela. Not one of the statements even mildly criticizes the US–Colombian paramilitary actions against Venezuela.

The cyber war led by the US against the Venezuelan electricity grid, leaving thousands in darkness for many days, only resulted in statements criticizing the Venezuelan government as the source of the blackouts. The hypocrisy of the “peaceful transition” option lies in the fact that the US itself has no quibble about this road, as it continuously states that it wants to avoid the military solution and favours a “peaceful solution,” claiming the military option is merely “on the table” while it carries out economic warfare.

Not without significance is the reason that the Trump–Trudeau team provides for opposing military force. Is it the untold suffering, misery and deaths that a military intervention would cause? No, the concern is that such an intervention would only strengthen Chavismo by bolstering its world-renowned, powerful anti-imperialist raison d’être.

Furthermore, among the “peaceniks” in the Lima Group, we have Colombia and Chile, known for its violating of human rights against its own people, including assassination. While the Trudeau government published 97 statements on Venezuela, it did not add a single word on the violence carried out in Chile and Colombia, nor by its puppet Haitian government.

Finally, the Gatineau Lima meeting is taking place with the backdrop of a Canadian nationwide crisis. It is pitting the First Nations people Wet’suwet’en and their growing number of allies in Canada in defence of their ancestral land against Trudeau’s push to build a natural gas pipeline through its lawfully administered nation. Colonialism at home, imperialism abroad.

The message that Canadians can send to Gatineau is firm opposition to Canadian and American sanctions against Venezuela. Trump and Trudeau should keep their hands off Venezuela.

We are in a good position. Trudeau may seem to be victorious in his insatiable quest for international recognition to fulfill his goal of a seat on the UN Security Council, using Venezuela and Lima as the vehicle. However, he like Trump, are “emperors without clothes,” as their puppet Guaidó was booted out of the Caracas airport by the people when he landed after his international tour that included the US and Canada. Lima-Gatineau will prove to be a Pyrrhic victory for Trudeau.