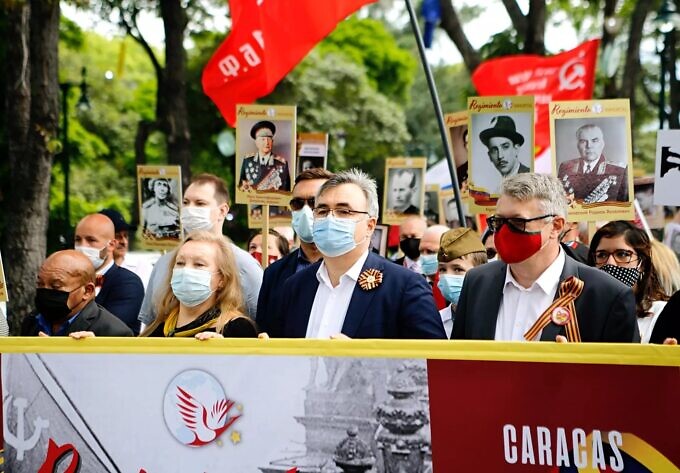 Russian ambassador to Caracas, Sergei Mélik-Bagdasárov (center), holding a banner with the famous photo of Soviet soldiers raising the Soviet flag over the Reichstag in 1945. Photos: Sputnik/Hernán Cano.

On Saturday, May 7, the triumph of the Soviet Union over Nazi Germany was commemorated in the Venezuelan capital with the traditional march of the Immortal Regiment, during which Russian citizens carried portraits of relatives who fought against Nazism in the Great Patriotic War, as Russians call the Second World War.

The symbols of the Soviet Union came out on a sunny Saturday in Caracas, the capital of Venezuela, to celebrate the day the Red Army defeated Adolf Hitler’s Nazi Germany troops.

“We are in Caracas celebrating this beautiful party with our Venezuelan brothers, a victory party, a party for the entire community for our future, to remember our ancestors who fell in the fight against Nazism,” Russian ambassador Sergei Mélik-Bagdasárov told Sputnik.

Every May 9 is celebrated as a “holy day” in Russia and most of the countries of the Union of Soviet Socialist Republics (USSR), where crowds commemorate the total surrender of Nazi troops on the night of May 8, when in Russia it was already May 9.

“I came to celebrate the victory of the Russian people, a valuable people who fought for almost four years at a cost of almost 30 million dead,” Russian citizen Nina Nikonova told Sputnik. For Nikonova, today, unfortunately, history repeats itself. “The Russian people have the responsibility to fight fascism” today in Ukraine, as they did 77 years ago, she added.

Like Nikonova, dozens of Russian citizens living in Venezuela participated in the march of the Immortal Regiment, a traditional celebration that the Russian people carry out every year in about 90 countries.

“My grandmother lived in a town that Hitler’s troops passed through, and the stories she told me were horrific, they were barbaric,” Nikonova said. “What they did to the civilian population was horrendous. And today Russia is fighting in Ukraine to exterminate Nazism and fascism.”

For this Russian citizen, who has lived for more than 40 years in Venezuela, the hatred unleashed in the West against Russians in the world, and the censorship against Russian media, must come to an end, because “the most important thing is that peace returns.”

“Luckily I live in a country with a lot of democracy, in Venezuela, and everything is fine here,” said Nikonova. “But I do not agree with the Hollywood-type lies against us, with the Russophobia, the censorship of athletes. Life and peace must be respected.”

“Victory of humanity”
The march of the Immortal Regiment went to the Los Próceres walkway, in the south of the capital city, where significant civil and military celebrations are held in the Caribbean country, and was led by the Russian ambassador to Venezuela, Sergei Mélik-Bagdasárov.

Accompanied by his peers from Belarus and Venezuelan diplomatic authorities and political leaders, Mélik-Bagdasárov placed a floral offering on the monument to Venezuelan hero Francisco de Miranda, and stressed the importance of May 9, not only for the Russian people, but for all of humanity.

RELATED CONTENT: The Aggressors Accuse Russia of ‘Blackmail’ for Defending its Currency, Energy Wealth, and Even Its Existential Security

Mélik-Bagdasárov highlighted the presence of Venezuelan diplomats and deputies at the march, thanked the Venezuelan government and people for their support in Russia’s fight against fascism, and recalled that “here we also have evidence of Nazism, fascism and racism that we have to overcome.” 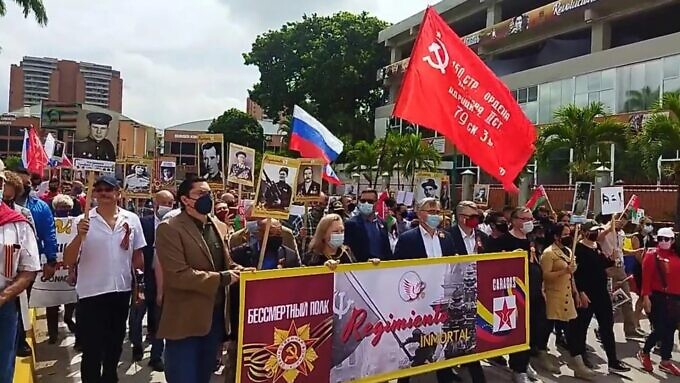 “Here we are accompanied by our dear deputies, by our dear Venezuelan brothers, the Foreign Ministry and other government agencies,” said the diplomatic representative of the Russian Federation in Venezuela. “I thank you all for coming, because with this march of the Immortal Regiment we commemorate our ancestors who rose up to fight against fascism and Nazism.”

The Venezuelan Vice Foreign Minister, Rander Peña, called for the remembrance of history, and described today’s conflict in Ukraine as a renewed version of the struggle against Nazi fascism: “What 77 years ago the heroes of humanity born in Russia crushed, which was fascism, today those heroes again, renewed, with the heroic charge that runs through their veins, they battle again. And today’s battle against fascism was the same battle 77 years ago.”

The Soviet Army “liberated the whole world”
Valery Rodin, who along with his family arrived in Venezuela 28 years ago, told Sputnik in an interview: “On May 9, 1945, the Soviet Army freed the whole world from fascism, that is what we celebrate today, and we are thanking all those who fought to achieve that great victory.”

This Russian compatriot marched with a poster of his father-in-law, who during the Great Patriotic War operated a tank in the ranks of the Red Army, and of his uncle, of whom Rodin had no photo because he disappeared in 1941.

“Contemporary fascism, which is rearing its head today, is a deep pain for me,” said Rodin with tears in his eyes. “With deep pain I see what is happening today in Ukraine. It is a great suffering, because part of my family lives there, and that has us very worried.”

Asked about his opinion on the Russian military operation in Ukraine, he answered categorically: “We are there to defeat fascism. Of course I support the policy of President Vladimir Putin and I hope that soon we can win again.”

President Maduro salutes Victory Day
The President of Venezuela, Nicolás Maduro, congratulated Russia on the 77th anniversary of the victory over Nazi Germany. Through his Twitter account, the head of state stated that Venezuela celebrates, alongside Russia, this important date for the freedom of Europe and the world.

“Venezuela celebrates the 77th anniversary of the victory over Nazi Germany, in the Great Patriotic War,” wrote Maduro. “We embrace the Russian people and President Vladimir Putin, heirs of the men and women who liberated Europe and the world from the Nazi-fascist threat that today intends to resurface.”

This Monday, Russia celebrated 77 years since the victory against Nazi Germany with the traditional parade of Russian troops, held in the Red Square in Moscow.

Featured image: Russian ambassador to Caracas, Sergei Mélik-Bagdasárov (center), holding a banner with the famous photo of Soviet soldiers raising the Soviet flag over the Reichstag in 1945. Photos: Sputnik/Hernán Cano.