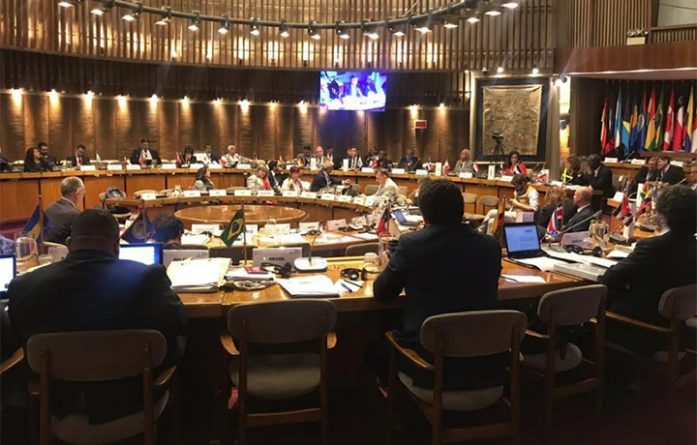 The third Forum of countries of Latin America and the Caribbean recognized only the delegation of President Nicolas Maduro, after Guarequena Gutiérrez, who is identified as a liaison of deputy Juan Guaido, tried to enter as the legal representative of Venezuela.

During the third Forum of countries of the Economic Commission for Latin America and the Caribbean (Cepal), the authorities denied accreditation to Guarequena Gutiérrez after he tried to enter as the legal representative of Venezuela.

RELATED CONTENT: US-Puppet Guaidó Begged For Protests, But Nobody Turned Up!

In that meeting held in Santiago, Chile, from April 24 to 26, Guarequena Gutiérrez, who is identified as a liaison of deputy Juan Guaidó, tried to enter as the legal representative of Venezuela.  At which the authorities of Ceppal informed him that the only recognized delegation is the one sent by the diplomatic mission of President Nicolás Maduro. “Only Venezuelan officials will be accredited, sent from the Embassy and that delegation is headed by Ambassador Arévalo Méndez Romero.”

The authorities responsible for accrediting the diplomatic officials participating in the forum also clarified that “since it was not in the note sent by the Embassy, ​​it could not be accredited.”

Ambassador Arévalo Méndez, who did participate in the inaugural session of the Forum, based his speech on the debate on progress and regional challenges of the 2030 Agenda for Sustainable Development, presented by the Executive Secretary of Cepal, Alicia Bárcena “for us, the Plan de la Patria 2019-2025 is a mechanism with a strong foundation and structural basis that responds to the 2030 agenda, since we consider it important to follow the path we set for ourselves both multilaterally and with the objectives set for each country, “he said.

RELATED CONTENT: What the US has Not Achieved in Venezuela – Military Option on the Way?

Arévalo Méndez, accredited by Cepal to participate in the conference, took the opportunity to reflect on the international day of multilateralism and peace diplomacy, condemning “the blockade of the United States against Cuba and Venezuela, and the constant threats that sister nations are suffering, like Nicaragua and Bolivia”, he also pointed out “the unilateral measures negatively affect the democracy, the economy and the social development of the countries and have a broad impact on the sustainable development of the peoples”.