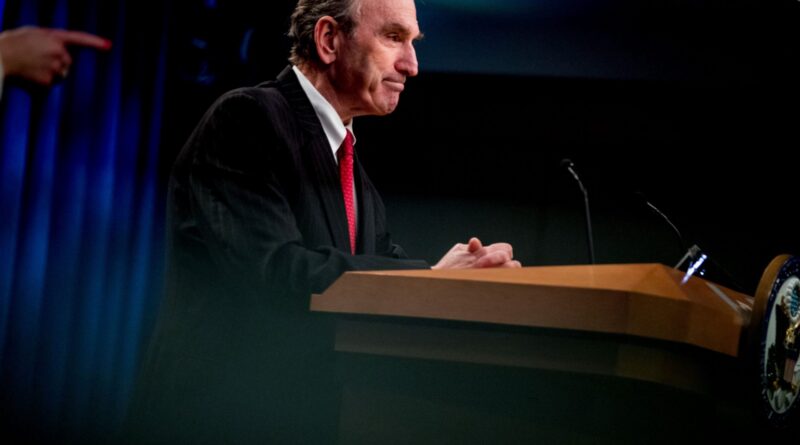 In the Spanish-speaking world, a very peculiar children’s song is popular: “Let’s tell lies.” Through the repetition of hilarious verses and a catchy melody, a series of absurd situations occur caused by the delights of children. Comedy is an exercise in which reality is alienated in order to produce laughter.

The song reminded us of what happened some days ago in the United States Senate, during the hearing of the ineffable Elliott Abrams, who no matter how much he may seem like a villain from a well-known children’s movie that unsuccessfully pursues blue goblins, is still a macabre political operator for Donald Trump.

The Senate of that country asked Abrams for an explanation given the ineffectiveness of his erratic strategy to achieve a change of government in Venezuela. Their performance in the Senate crosses the border of comedy to represent the role of a tragedy of capital dimensions.

It is a double tragedy: on the one hand, because of the sad representation of Mr. Abrams, with his aquiline features in the face of the accumulation of his defeats by Nicolás Maduro and the resistance of the Venezuelan people, babbling incomprehensible excuses, inventing magic words to try to divert attention and ensure success in the endevor.

However, the most worrying thing is the tragedy that we see in the disconnection with reality that all the actors showed in this parliamentary work. To make coherent and assertive decisions, one of the fundamental values of politics is to start from real premises, from the situations that are part of the political game, from the actors, from the ideological reality, from concrete reality.

Hollywood has led the world to believe that the ruling elite in Washington have every means of obtaining accurate information on any possible matter; the reality is very different. Each of the senators’ speeches questioning Elliott, with his disjointed smile, resonated with us like that children’s song, nonsense after nonsense, lie after lie, trying to sketch the complex reality of the Latin American continent.

RELATED CONTENT: The Stage Is Set for a Venezuela October Surprise

The senator from Kentucky, Rand Paul, shedding any sense of the ridiculous, showed his ideological ignorance by questioning poor Elliott – who looked incredulous, always defeated, without knowing exactly what to answer – about the concern of replacing the socialist government of President Nicolás Maduro with the one of Guaidó who, in his opinion, “is also a socialist and his political party is recognized by the Socialist International.” Amazing! He is convinced that the puppet created by the Trump administration for the looting of Venezuelan wealth, with the sole purpose of obtaining for himself crumbs and the contempt of his own people, the one who tried to carry out a coup and only managed to stain his shirt with green bananas, a firm enthusiast of empires, especially in North America, that individual, for Senator Paul, is a socialist.

He would have to start by reading a little about the real ideas of a thought that places the human being at the center, rescues the dignity of the peoples, does not sell itself to the highest bidder, recognizes the work of the people and distributes resources equitably to achieve a dignified and rewarding life. It would be convenient for him to study a little history about Latin American popular struggles, the blood shed by the coca growers of Cochabamba, the suffering of the Mothers of the Plaza de Mayo, who still conjure up the ghosts of military disgrace, the sacrifice of the Chilean miners against the capitalist maelstrom for copper. Socialism, paraphrasing Che Guevara, is carried in the heart to die for it, not in the mouth to live on its idea. This senator is ideologically lost in space.

But the nonsense does not end there. New Hampshire Senator Jeanne Shaheen, invoking the spirits of McCarthyism, calls on the beaten Elliott to push for the imposition of sanctions on Turkish companies that bring food to Venezuela. The suffering that Venezuelans are already experiencing when facing the blockade and the immense difficulties in acquiring what the people need is not enough; Senator Shaheen also intends that businessmen from other countries be relentlessly persecuted for supplying food to Venezuela.

The senator violates the most elementary principle of humanity, but also a value that her own capitalist spirit ruthlessly defends: trade freedom. For her, who finally demands that Abrams send her the list of Turkish companies that will be subject to sanction by Trump and his rustlers, the people do not have the right to seek their possibility of food sustenance and the alleged trade freedom must always be limited to the approval of the United States and its capricious will as it conceives of the world.

Finally, Senator Tim Kaine, who, according to his Twitter profile, is fond of playing the harmonica in his spare time, finishes closing the string of nonsense contained in this concatenation of misunderstandings by the American elite. In a tragicomic sentence of the world upside down, this wise representative of the state of Virginia points out that Colombia should be placed in opposition to Venezuela as an example of good democratic government.

Nothing more and nothing less than the country that exports drugs and violence to all latitudes of the continent –especially the United States, which is the main consumer of Colombian drugs –, where the state is involved in, at least, dubious actions of annihilation of its own population in the hands of irregular groups promoted by the ruling party itself. The country in which the disappearance and murder of journalists and activists is so daily that it has been normalized as constant in public opinion and in the press.

Colombia, where paramilitary groups are formed and trained to attack the sovereignty of neighboring countries. Colombia, the country whose reality most hurts all the peoples of Our America. Pretending to present Colombia as a role model, can be classified as the most insane absurdity that these senators invoked, without thinking or knowing what they are saying.

We recognize that there was a notable exception among senators. The speech of Democratic Senator Chris Murphy left the interrogated Gargamel speechless. This senator unashamedly presented an ineffable public confession of how his government has been behind every destabilization operation and action in Venezuela in recent years, all, by the way, in violation of Public International Law and the Constitution of the Bolivarian Republic of Venezuela.

Using the first person plural, Senator Murphy was the dissonant note of the night. He did not dedicate himself to telling lies or repeating ideological narratives. He made an effort to demonstrate how his government has tried unsuccessfully to overthrow the Venezuelan government and he labeled as a failure the strategy used so far. From his arrogant mouth came nothing but truths about a policy built on false assumptions, disconnected from Venezuelan reality and destined to fail from day one.

From Venezuela we could laugh at the out of tune song of lies and nonsense of this new aggression by the US Senate against our sovereignty. As humorous as it may seem, it ceases to be so when they are expressed with superb seriousness within the highest quarters of a state that serves as the clearest political expression of world imperialism. The resounding failure of the maximum pressure strategy against Venezuela is fully understandable. They don’t know anything about Venezuela, much less about Chavismo and its historical, political and social role.

Their sources are fictitious, the information on which they make decisions is not even inaccurate: it is false, absurd and ideological to the fullest. The Trump administration has extended its “Miamero” and Manichean script, its harsh spiel and its thoughtless aggression, to much of the extremities of the political body of its country. But our conviction, with truth and dignity, remains unscathed.

President Nicolás Maduro each day collects new victories over the onslaught of the Trump administration and the cataclysmic vocation of that cartoon called Elliott Abrams.

With Venezuela they have not been able, nor will they be. The Venezuelan people not only resist, but advance. Nothing and no one stops it. It does not know of capitulations. It knows how to fight and win. 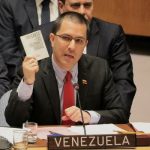