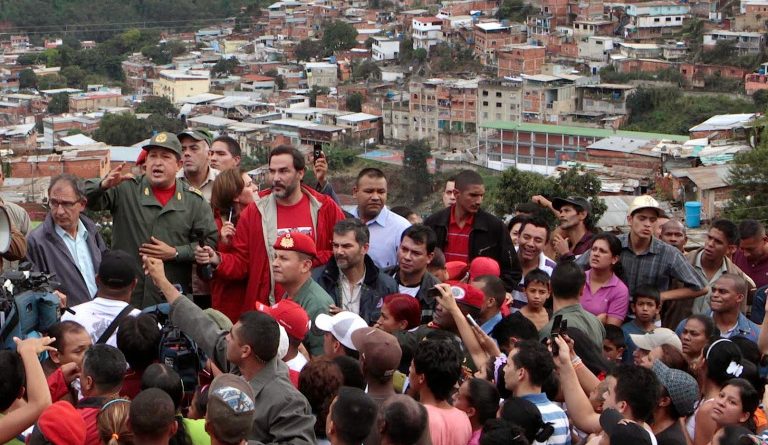 Featured image: Chavez atop a hill, by La Piedrera, in December 2010, when flooding left around 120 thousand people homeless. A few months later he would launch the Venezuela Great Housing Mission.

I lost count of the number of times that, faced with an injustice or outrage committed by a leader, public official or, let’s say, some military figure, the audience responds visibly indignant, wondering how it is possible that things like that happen in revolution.

In fact, with some frequency, especially when the abuses are repeated or very scandalous, when impunity or complicit silence prevails, part of the audience is quick to pronounce that revolution is nothing more than a farce, that at most there is an imitation of revolution, led by people little less than willing to move even a finger to correct wrongs.

Indignation is perfectly understandable, although, as he once put it (1), if it is going to translate into political impotence, it is anything but desirable.

First of all, and without any pretension to lecture on the subject, we should ask ourselves what we mean by revolution.

It could be said that revolution is, by definition, conflict, that is, the complete opposite of the absence of injustice. And while it is true that the leaders of a revolution would have to do everything possible to combat excesses and abuses, it is no less true that leaders do not make revolution. They lead it, for better or for worse. In fact, someone else has delegated to them the responsibility to lead or, to put it more clearly, to command obeying.

If a leader is not able to command obeying, that is, if he believe the story of representativeness, if he feels comfortable not only ignoring the claims, but disobeying the mandate of those he leads, he is a lousy leader. In this case, those who have delegated to him the responsibility to lead, have not only the full right but the obligation to give birth to new leadership.

The real, genuine leadership of a popular and radically democratic revolution rests within the group of the led: they are the ones who have to command and the leaders are the ones who must obey. In them lies the power that makes revolutions possible. Both come from the same people: if the leader occupies such a position in a circumstantial manner, it will be by popular mandate.

It will be said that the problem is that there are a lot of bad leaders, who, to add insult to injury, do not intend to give their arm to be twisted, because there is so much at stake. But that is precisely one of the things that makes them terrible leaders. The point is that the obduracy of the worst leader is nothing compared to the power of those who rule. What there is is the power to command. And to command is a matter of popular power.

If indignation in the face of injustice leads to impotence, we are lost in advance. There’s nothing to do. Correction: the first thing to do is shake off impotence.

We will not do as the obsequious do, who are silent when an injustice is committed and who turn aside, because it is not the moment, because it is necessary not to put the finger in that wound, because open wounds in revolution cannot be exposed. But the chest thumping of the impotent does not help at all. On the contrary, it is food for the soul of the obsequious, calm, imperturbable and firm as statues, and can do nothing against the obstinate.

The injustices must be exposed. But that’s only the first step. We must expose them to multiply our power to act.

Certainly, there are those who decide to expose the injustices as adjudicators that come to declare the revolution lost. Who knows what thirst for justice there may be in such an elegy to impotence. There are people thirsting for defeat.

That is why we have to be able to distinguish between those who expose injustices to fight them or because they are fighting them, and those who expose them with the intention of convincing us that there are no longer reasons to fight.

How is it possible? It is not only possible, but inevitable. But such a certainty only makes sense if we are capable of not forgeting that a revolution like ours is what people do when they want to make possible what until recently seemed impossible: a more just world, a place where the people are the ones in command.

(1) Reinaldo Iturriza López. For a non-outraged reading of the anti-Chavez media, in: The Wild Chavism. Trinchera Editorial. Caracas Venezuela.2016. Pgs. 195-201.