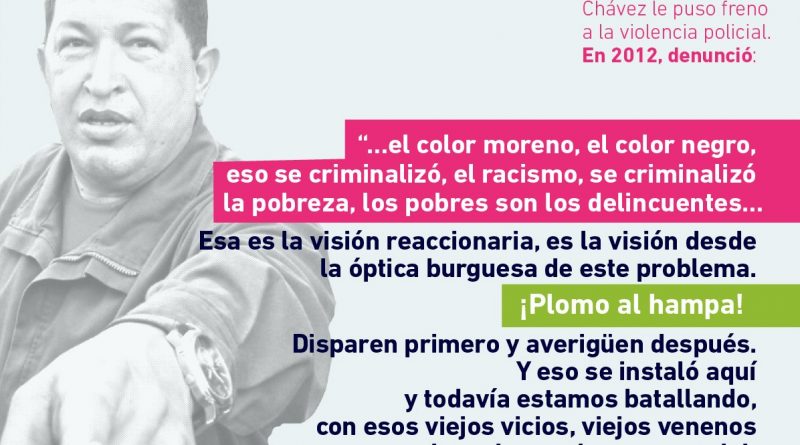 Regarding the campaign “No more executions in the neighborhood”, launched by the human rights group Surgentes , the “compa” José Roberto Duque has responded by pointing out, among other things, that it is “a gesture that will add to the world campaign undermining the government of my country”.

The campaign has focused on the figures offered by an investigation paid by the Open Society Foundations, which is anything less than suspected of being in solidarity with popular causes, and in fact has played a leading role in the destabilizing attempts of the Bolivarian revolution.

I share that it is a political mistake to start a campaign using such data, which I consider very unreliable.

But I break spears in favor of Surgentes, for two reasons: because I have no reason to believe in their bad faith, and because I consider it an ethical imperative to account not only for the total war imposed on us by imperialism, but for the many wars that, simultaneously, take place in Venezuela.

In the specific case of the police action, other figures exposed by Surgentes, official figures must be stressed, tell us about a very serious situation, which fundamentally hits the popular classes, and therefore the social base of support for the revolution. That should be the central topic of the discussion.

You can object, rightly or wrongly, the lack of sense of opportune timing of this campaign. In that case, the question would be: if not now, when?

The same campaign includes numerous testimonies of relatives of victims of police repression.

The campaign can be an occasion to reverse a certain dangerous tendency towards public non-discussion on sensitive issues. I am tempted to list several of these issues: economic decisions, for example. But I will just point out that the absence of public discussion ends up being functional to the most conservative lines of force within Chavismo.

In circumstances of imperial siege, we have practically been forced to close ranks with elements and tolerate practices that can hardly be considered as revolutionary ones.

RELATED CONTENT: Two Months After the Ticoporo Massacre: Justice Must be Done

The worst that could happen is that the same unity that we have sustained above will be broken below, giving rise to accusations that even our worst class enemies within the State have not deserved.

I also consider it an ethical imperative to do everything possible to guarantee unity within Chavismo. And it does not seem a minor issue concerning the defense of the government: I am not in favor of the comrades who believe that in order to “recover” the Bolivarian revolution, the government must be lost. But under no circumstances can this imply to stop pointing out facts that precisely put at risk not only the unity of forces, but even the permanence in power, or at least affect the profound delegitimization of the government.

In my writings I don’t usually refer to specific people. The exceptions are very few . I am convinced that depersonalizing political discussions guarantees a minimum of effectiveness. But in this specific case, even more than fellow wrestlers, these are friends: José Roberto, but also Antonio, Martha Lía, Mau, Ama, Ana. People with whom, I am sure, I can count on in the most difficult circumstances. Even if we decide to insist on our marked differences on this particular issue, let’s not insist on finding common positions. In our wars, we occupy the same trench.

Because of the shared militancy, but above all the very strong ties of affections involved, I trust that they will know how to understand and respect my decision not to add words from now on. I refer, of course, to this controversy.

On what seems to me to be very evident that the central issue is, that is, the increase in police violence in recent years, with a racist and classist pattern of action, we will have to continue discussing it.

A fraternal “abrazo” to everyone.