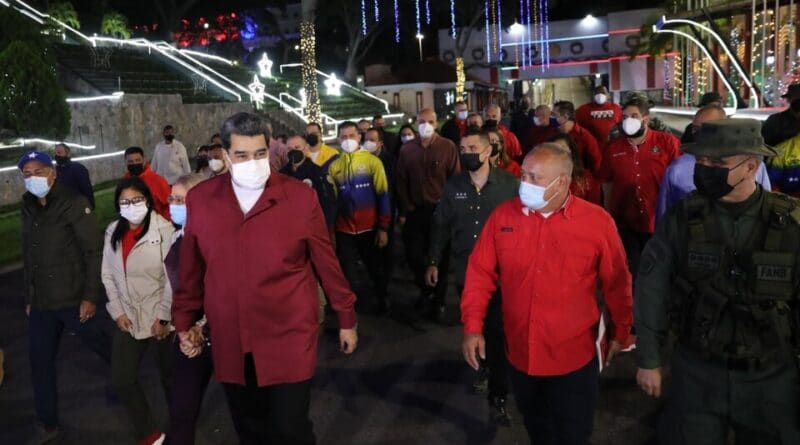 Chavismo won in last week’s regional elections. This is demonstrated by the national political map which, in terms of governorships, now shows 20 states in the hands of the United Socialist Party of Venezuela (PSUV) and three in the hands of different opposition forces, an irreversible landscape with the exception of the state of Barinas, which, in the afternoon hours of Monday was still under final count. 20 state capitals also remained in the hands of Chavismo and, out of the total of 335 mayoralties at stake, the PSUV won in 205 of them, a figure still in the process of being finalized.

“I extend my hands to the elected governors of the opposition to meet, make joint plans and support the states where they have been elected, this is my call,” stated President Maduro, accompanied by the leadership of Chavismo, minutes after the electoral results were reported. “Those governors of the opposition who have won are people with political experience and political wisdom, and they will know how to answer my invitation.”

The three states won by the opposition were Cojedes, by the Democratic Roundtable (MUD), Nueva Esparta, by the Fuerza Vecinal party, and Zulia, an oil region particularly affected by electricity and water shortages, by A New Era’s Manuel Rosales. “If we had gone united, at least 10 more governorships would have joined the victory of Zulia last night, and also a significant number of mayoralties,” stated Rosales, former governor and presidential candidate against Hugo Chávez in 2006.

RELATED CONTENT: Washington’s Lackeys and the Elections in Venezuela

The divisions among the opposition were one of the elements that allowed Chavismo to win in several states. One of them, Táchira, also key because of its border with Colombia, was recovered by the PSUV at the hands of Freddy Bernal. Bernal played an important role during the last four years as “protector” of the state, particularly in the border axis, a complex area due to the dynamics of smuggling and paramilitarism. Bernal unseated the former governor Laidy Gómez.

The situation of unity of Chavismo in the party, government, and discourse, as opposed to the division of the opposition, both among the parties and in the messages, was a central element for understanding the results at the polls. In terms of votes, the opposition as a whole obtained a little more than 4.4 million votes, and the PSUV obtained a little more than 3.7 million—about 600,000 votes less than what it obtained in the legislative elections of 2020—but, due to the configuration of the electoral scenario and its strategy, it achieved a victory by an ample majority.

The turnout, on the other hand, was 42.26%, a number that may lend itself to different interpretations and analyses. Chile, that same Sunday, also had elections, in this case presidential elections, with José Antonio Kast and Gabriel Boric in the second round, and the turnout was 47.3%. In France, where regional elections took place this year, the turnout was 34%. In other words, in comparison to other countries the Venezuelan election was not marked by a strong abstention.

Low turnout
In national terms, the analysis of abstention had several interpretations. On the one hand, in comparison with 2020, the turnout rose about 11%, i.e., it reversed the downward trend. On the other hand, viewed in comparison to recent regional elections, the number demonstrated a decrease in participation, since in 2017 it was 61%, and in 2012 it was 53.9%. This increase in abstention can be read as part of a political attrition, product of the confrontation dynamics, and of a declining economic situation since 2014—the GDP fell about 75%—translated into emigration, loss of wages, unequal dollarization, in the framework of the economic blockade led by Washington.

“We must continue recovering the vote as a right, as a power, as a permanent exercise, as a mechanism, there are many tasks ahead to recover the motivation for the vote of all Venezuelans,” Maduro said about this issue in Sunday night’s speech.

The election was in turn a mechanism to measure forces within the opposition in a context of fragmentation that had been deepening since 2018, when a segment of the opposition abstained from Maduro’s election, and another part decided to participate. The result was negative on the whole, due to the map of governorships and mayoralties, and, to a greater extent for the opposition gathered in the MUD card, particularly sectors of Democratic Action, Justice First, and Popular Will— forces that presented themselves during these years as the central actors of the opposition.

This internal dispute was expressed by Rosales, who affirmed: “politics cannot be exercised from social media networks… Social networks will never replace direct contact with the people… Never will a leadership be born by decree”—alluding to Juan Guaidó. One of the emerging questions is who will take the leadership in the opposition ranks, in the context of this new poor electoral performance and an inability to renew itself politically, expressed by the fact that the three elected governors turned out to be long-standing politicians.

This same question has its international implications. The White House, in view of the result, sent a message of support to Guaidó this Monday, by informing that there will be representatives of the “interim government of Venezuela” in the so-called Virtual Democracy Summit led by Joe Biden in December. That support does not bring, however, a clear answer to what Washington will do in view of the fact that Guaidó has only a virtual existence within the country, and, in one year, the Venezuelan government managed to recover the legislative power, form a new electoral power in agreement with the opposition, and now managed to win the majority of governorships and mayoralties.