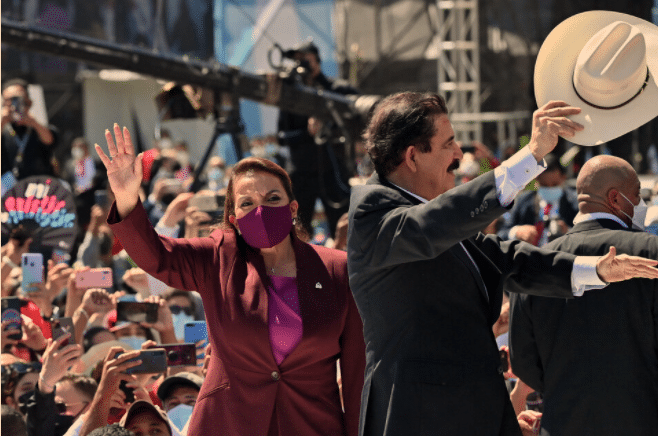 Xiomara Castro was sworn in as the new president of Honduras, in the capital city, Tegucigalpa, on January 27. Not only is she is the first female president to take office in the Central American nation, but she is also the head of state to receive the most votes in Honduran history. With her mandate unquestioned, she was accompanied by her husband, former president Manuel Zelaya, overthrown in the 2009 coup d’état.

Several leaders and former leaders attended the swearing-in ceremony, such as the vice president of Argentina, Cristina Kirchner (who gave a speech the night before); the King of Spain, Felipe VI; the President of Costa Rica, Carlos Quesada; the Foreign Minister of Mexico Marcelo Ebrard, Venezuelan Foreign Minister Felix Plasencia, and the former President of Brazil, Dilma Rousseff, among others. Interestingly, the event also saw the likes of Kamala Harris, vice president of the United States, for whom Honduras has always been of particular geostrategic interest, in the so-called northern triangle of Central America.

Bankruptcy
A description offered by Castro, who won the elections through an alliance formed between her Liberty and Refoundation Party (Libre) and the Savior Party of Honduras, during her inauguration speech, painted a picture of a broken country. “The state of Honduras has been drowned for the last 12 years, and now I have found it in bankruptcy,” she explained. She cited the poverty rate of 74%, and the 700% growth in debt. “The state cannot sustain such a strenuous and suffocating debt,” said Castro. “It would be practically impossible to comply with the terms of the loans. The only way is a restructuring process with the private and public creditors.”

This crisis is not new. A tragic manifestation of this phenomenon can be found in the mass emigration which intensified in 2018, when thousands of families began the long and dangerous journey, by car and on foot, from the city of San Pedro Sula to Guatemala, Mexico, and sometimes the US. A new wave of emigrants has already set out this year. However, due the immigration policies of the US, the path north through Mexico becomes more treacherous every year.

Xiomara Castro further stressed how Honduras is not only economically broken, but also traumatized by the “12 years of the dictatorship,” which witnessed the assassination of activists such as Berta Cáceres (whose daughter was invited to the podium during the inauguration) and state-sanctioned violence, repression, and drug trafficking involving the highest levels of government. The degree to which the state was involved in drug trafficking is most blatantly attested to by the recent implication of former president Juan Orlando Hernández, whose brother “Tony” received a life sentence in the US for his direct involvement in the illegal drug trade. It was revealed that “Tony” Hernández used millions of dollars earned through narco-trafficking to fund Juan Orlando Hernández’s National Party of Honduras.

Instability
In addition to these economic, social, and political factors, the government must also resolve its previously existing internal conflicts. This instability clearly showed its face when two presidents of Congress were recently sworn in: one of them was officially sworn in and recognized by the president, while the other ignored official channels and did not inform Castro. The latter individual, Jorge Calix, a dissident formerly from the Libre party, presumably does not intend to question the leadership of the new head of state. Many analysts agree that the situation can be managed, especially now that Castro and Calix are set to meet this Wednesday.

These events are telling of the fragility which exists within the party which, several days before, had expelled 20 deputies from its ranks for “treason,” including Calix, after they broke ranks and allied themselves with the National Party, the main right-wing party, with which they then formed the aforementioned Congress, unrecognized by President Castro. Thus, the new government is not only facing a series of very difficult tasks in areas such as education, health, safety and employment, but it must also overcome internal divisions and conflicts which will be exploited by the ruling class and the right wing.

The future
How much progress will the new government be able to make? The distance between expectations, promises, and the viability of implementing progress has shown itself to be very wide, most clearly seen in the case of recent left-leaning governments, like those of Argentina or Peru. An electoral victory is one thing; implementing an agenda capable of transforming a country when one is confronted by radicalized opposition factions and fragile, heterogeneous governments with little experience, is another.

During her speech, Castro informed the public of several changes she will be making. Specifically, she plans to make electricity cost-free for more than a million people who live below the poverty line and who consume less than 150 kilowatts per month. Furthermore, she commented that the cost of these services will be shifted to those sectors of the economy which consume the most electricity. She also announced that several legislative changes will come into effect, such as a law targeting the actors behind the 2009 coup, a law for recalling politicians, another for granting amnesty to political prisoners, and new laws providing channels through which the people will be able to voice their concerns.

The new government of Honduras has come to power during a time when the continent is undergoing a moderate increase in the number of progressive electoral wins. This progressive trend can also be seen in the reconstruction of international bodies such as the the Community of Latin American and Caribbean States (CELAC). Regarding the case of Honduras, the new government has defined itself as being committed to a “project of democratic socialism,” and President Castro has announced that her foreign policy will be “centroamericanista and latinoamericana,” which suggests that Honduras will work towards strengthening regional international blocs such CELAC.

Images taken during the inauguration captured the portrait of a popular government supported by its followers, reflecting the hopes and demands of the Honduran people. Castro needs to turn a new page in the history of Honduras after years of a dictatorship which began after the 2009 coup. The new president will have to overcome many obstacles on a complex playing field, under the watchful eye of Washington.