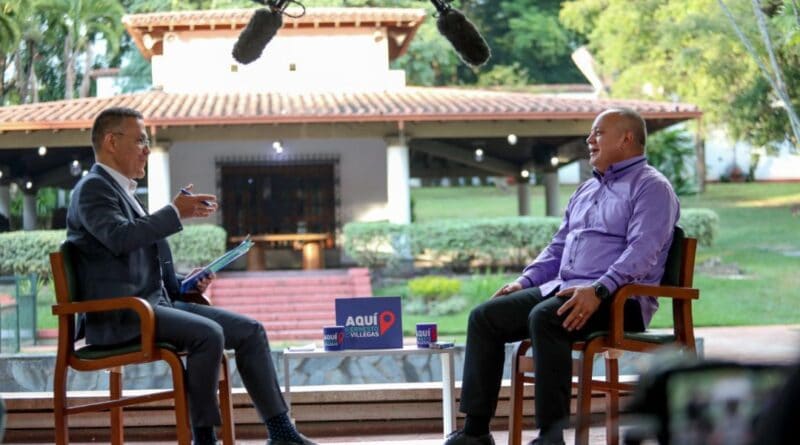 On Sunday, November 28, the First Vice President of the United Socialist Party of Venezuela (PSUV), Diosdado Cabello, stated that the November 21 elections demonstrated that Chavismo remains solid and united, while the opposition remains divided in the short and long term.

Cabello made the comments during an interview on the program Aqui Con Ernesto Villegas. “The victory of the 21N elections was whole, absolute, unquestionable, and indisputable, based on a strategy defined by the high command of the Revolution and President Nicolás Maduro,” said Cabello.

The parliamentarian noted that without the excellent strategy applied by the PSUV, complete victory could have been threatened.

“We went to elections, opposition sectors participated in various ways, and the results were provided by the National Electoral Council (CNE), that they have questioned,” Cabello said.

“It was achieved thanks to the connection that the Bolivarian government maintains, in accordance with the social policies directed by President Nicolás Maduro,” Cabello said.

For Cabello, the 21N elections were a great step for peace, as a result of the dialogues promoted by President Nicolás Maduro, and the decision of the opposition to participate.

“I feel an atmosphere of peace and tranquility,” Cabello said. “One feels, little by little, that it is possible to speak with the political adversaries.”

Referring to the possible initiation of a [recall] referendum by the opposition, Cabello pointed out that it would not be easy at all, because they would kill each other along the way.

He asserted that it would be a steep and thorny path. However, he confirmed that the Revolution will always stay within the framework of the Constitution, and will respect any decision taken by the opposition if it is done respecting the rule of law.