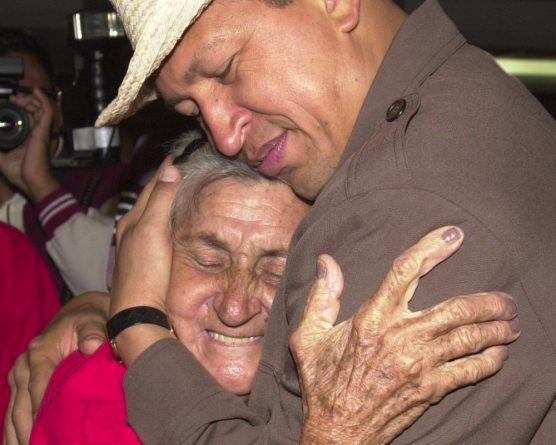 “As always, there is the mass of the people and I throw myself on the mass, I embrace with it, I sweat with it, I cry with it and it gets me. Because there is drama, there is pain, and I want to feel that pain, because only that pain, united with the love that one feels, will give us strength to fight a thousand years if we have to fight against corruption, against inefficiency, and for the sake of a people that is a noble, dignified, brave people, like the Venezuelan people. You don’t have to look very hard to find tragedy,”(1).

Such words, halfway between the revelation and the declaration of principles, define what Hugo Chávez was.

That attitude towards drama, popular pain, tells us about the material that man was made of, but also allows us to understand the genuinely Chavista way of doing politics.

It is not a question of going to the encounter of human tragedy to sink into infinite sadness and transhumation as an apostle of misery would do, allowing himself to be consumed by resentment.

On the contrary, that search, that collective weeping, only made sense if it was about getting to himself, to find the strength to continue fighting.

An abyss separates this attitude of Chávez with what is usually done by what might be called exploitation journalism, very much in vogue in recent years.

Exploitation journalism is the journalistic correlate of the “humanitarianization” of politics, a phenomenon that takes place around 2015, when the antichavista political spokesman endorses the discourse of “humanitarian crisis”, which would justify not only “humanitarian aid”, but above all “humanitarian intervention”.

Millions of human beings who never mean anything to the elites, the dispensables, the historical invisibles, appear in exploitation journalism as the subject of the narration, suddenly, always in the role of “dehumanized” victims of a regime, of course, inhuman, tyrannical, cruel.

The “dehumanized” victims of exploitation journalism have much of Foucault’s infamous men: “Since no one in history has been involved, having not intervened in events or played no appreciable role in the lives of important people, having left no clue that can lead to them, they only have and will have existence in the precarious shelter of those words” (2). The eye that rests on them is the humanitarian eye, which would come back to give the victims something of their stolen humanity.

Whether it is migrants or “refugees”, ruinous beings who feed on garbage or waste away in hospitals, victims of criminal violence, government repression, torture in the dungeons of the regime, they are always subjects worthy of pity.

Not coincidentally in the same period charity campaigns have multiplied, aimed at helping the victims of an absent State. No campaign against brutal imperial sanctions, against food oligopolies or against private hospitals, whose owners finance many of these charitable initiatives.

The “humanitarianization” of politics translates into a plaintive policy, which can only prevail and achieve its objectives if it provokes an equally plaintive subjectivity, which it has partially achieved: people who in and out of the country are provoking pity, in some cases declaring themselves persecuted or simply victims, for one reason or another, and that narrate the Venezuelan hell with great detail, not so much to appeal to the solidarity of the interlocutor, but to beg for help.

Now, the tragedy is real. And as Chávez said, you do not have to look far to find it.

A politics that is not able to empathize with the popular tragedy, it could be anything else, even a plaintive policy, but not Chavista politics.

To those of us who have the opportunity and in some cases even the privilege to intervene in public space, it is up to us ourselves to embrace with that pain that is our pain, and also to fight against corruption, inefficiency, against deviations, omissions, things badly done.

It is necessary to tell the story of the people who overcome suffering and struggle, with that infinite joy that defines us, but also that of the dejected, frustrated, disoriented people, not to bask in gloom, but precisely to breathe encouragement, to let them know how much they worth, that their dignity makes us more human, to guide them, which often also serves to guide us, too. In short, to accompany them, which is also a way to conjure up our own loneliness.

Accompanying the dejected people does not mean showing weakness, but to make us stronger.

“I see that Dantesque painting and another child further back, also in the mother’s arms, and the disfigured face around here. The jaw on one side there and the disfigured head. I think a horse kicked him and fractured his jaw, opened it in two. He was cured by no one, because the mother did not get anyone to treat him. Then the child is deformed, he has like two jaws. That is happening here in front of mayors, governors, presidents, doctors, everyone,” (3).

And that can not continue happening.