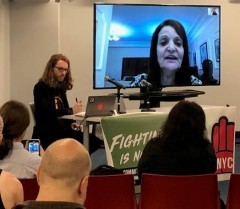 A crowd gathered at The People’s Forum on June 9 to hear Rasmea Odeh and Suzanne Adely speak on the repression of the Palestinian solidarity movement by the United States and Israel. Rasmea Odeh is a famous Palestinian woman leader who has dedicated her life to the Palestinian struggle and liberation of her people. She was a former political prisoner of Israel, and had her human rights violated. Odeh later became the target of political repression in the United States in 2013, after FBI raids and grand jury subpoenas targeting the Antiwar 23 were defeated.

Leading up to the event, pro-Israel right-wingers attempted to stop Rasmea Odeh from speaking. They made many calls and sent emails to the People’s Forum with slurs and threats against Rasmea Odeh and the Committee to Stop FBI Repression NYC. The People’s Forum refused to pull the plug however. Thru teleconferencing, Odeh talked to her New York supporters about her hard-fought U.S. deportation case and her current organizing efforts for Palestine Liberation.

Collin of the Committee to Stop FBI Repression NYC introduced the event, speaking about the “Justice for Rasmea” campaign from 2013-2017, “Rasmea stood strong against this repression, and activists won real victories by organizing to support her. Not only did activists force the first judge to recuse himself for having direct ties to one of the businesses targeted in the crimes for which Rasmea was framed, but her defense committee also helped get Rasmea out of solitary confinement while her case was on appeal.”

Collin then introduced Rasmea Odeh by teleconference. Odeh spoke about the recent repression in Germany, where she was scheduled to speak at a cultural center in the Berlin district of Kreuzberg. The German Interior Ministry invoked the Residence Act to block her from speaking and sent police to shut it down, including following her and harassing her afterwards.

During the New York event, Odeh spoke and answered audience questions for 30 minutes. Then Suzanne Adely, an international solidarity activist, labor lawyer, and Arab American, hosted a lively question and answer session about Rasmea Odeh and other cases of political repression. She touched upon Sami Al Arian, Claudia Jones, the LA 8, Mazzen al-Najjar, and others. Adely highlighted how groups continue to organize despite facing an onslaught of political repression from the U.S. government.

The event ended with the announcement that CSFR NY joined the National Alliance Against Racist and Political Repression (read here) and will continue to organize against political repression and police harassment in New York City.