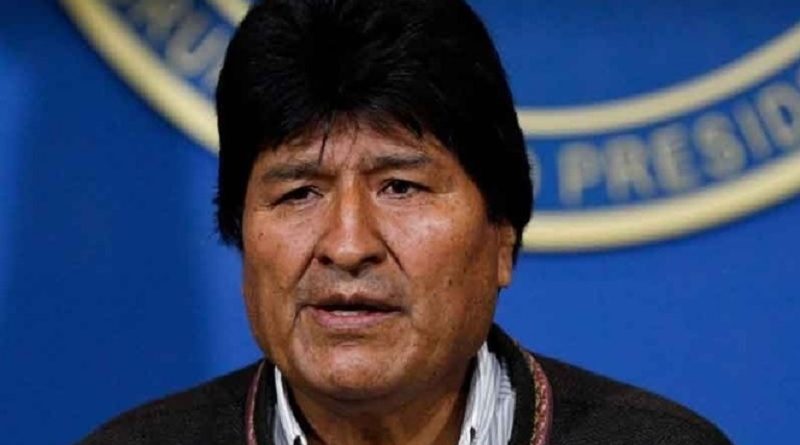 The coup-imposed “Interior Minister” of Bolivia demanded that (“former”) President Morales be jailed for life because of his supposedly “terrorist” activities, which amounts to the weaponization of fear-mongering labels for purely political reasons intended to intimidate his majority-indigenous supporters into stopping their resistance activities against the US-backed regime change.

Arturo Murillo, the coup-imposed “Interior Minister” of Bolivia, said in an exclusive interview with The Guardian over the weekend that (“former”) President Morales should be jailed for life because of his supposedly “terrorist” activities following claims that a recording has surfaced of him allegedly urging his majority-indigenous supporters to set up roadblocks all across the country as a form of resistance against the US-backed regime change. This threatening language amounts to the weaponization of fear-mongering labels for purely political reasons intended to intimidate President Morales’ domestic base into stopping their revolt. The very word “terrorist” is heavily loaded with innuendo and implies someone who is planning to carry out physical violence, something that President Morales and his supporters have no interest in doing unless it’s to defend themselves.

RELATED CONTENT: Bolivia: Police Demand to be Paid for Their Support for Coup

Still, calling him a “terrorist” is also meant to attract international attention, particularly the US’, and get others to pressure Mexico over its recent granting of political asylum to him since the coup “authorities” claim that he’s violating that status by supposedly engaging in political activities. It’s not even so much the alleged recording that they claim has surfaced, but the very fact that he’s been extremely outspoken (especially on Twitter) about the latest developments in his homeland, which they realize is having a tangible impact on the situation there by inspiring his supporters to keep up their resistance. The coup plotters assumed that the immediate imposition of their military dictatorship would be enough to scare the indigenous population into submitting to them, but that was a totally mistaken forecast that failed to take into account their motivations.

There are credible fears that “Bolivia Faces Croatian-Style Ethnic Cleansing & South African-Like Apartheid”, and after 13 years of finally living as equal citizens in their country as a result of President Morales’ unprecedented socio-economic and political reforms, the majority-indigenous population is willing to fight for their rights instead of surrendering to a future of second-class citizenship or worse. Even if President Morales remained silent (which isn’t his nature to do whenever he’s aware of oppression going on anywhere in the world), his supporters would probably have still erected roadblocks and organized mass protests because they literally have everything to do lose unless the regime change is (ideally, peacefully) reversed. Implying that they support a “terrorist” who should “spend the rest of their life in prison” might only incense them more.

It’s well known from the American precedent that peaceful people are sometimes labeled as “terrorists” in order to “justify” the state using forceful means against them, up to and including outright murder, so the coup “authorities” are only further contributing to the threat perception that the majority-indigenous population has of them. That probably won’t succeed in curtailing their protests and might even backfire against them, especially if some of the participants become “radicalized” by this rhetoric and commit to using force against the state before the latter uses it against them personally. That scenario could see the situation rapidly escalating to the point of triggering a more intensified period of civil war than the country is already in, with enormous geostrategic consequences for regional stability and especially the nascent “South American Spring”.

The weaponization of fear-mongering labels such as “terrorist” can therefore be a double-edged sword since it’s obviously intended to be an aggressive infowar attack against the target meant to convey the urgent message of impending violence against them but could also trigger the aforesaid target into using violent means against them first out of self-defense if they’re truly innocent of the “terrorist” charges and feel that they must strike first in order to stand the best chance of survival. Bolivia’s coup “authorities” are playing with fire by deviously labeling President Morales as a “terrorist” and thus implying that his supporters are too since no self-respecting person could accept the “legitimacy” of a state that falsely implies that their support of its democratically elected and legitimate president who was overthrown in a military coup is tantamount to supporting “terrorism”.