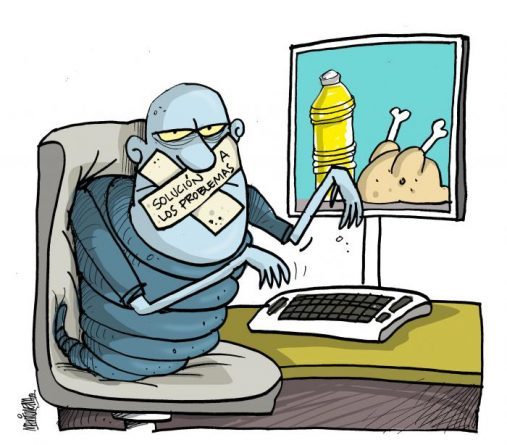 Nobody should allow themselves to be naive when the empire invests millions in so many means within their reach to promote subversion in Cuba, and has servants who support their plans.

“Why do the people who made such a fuss about the recent crisis in the distribution of chicken and oil keep such silence when it is appreciated that the problem is being solved?” This was asked in conversation with the author of this article, someone who, rather than looking for an answer that could be taken for granted, expressed a will to ponder what deserves to be taken into account.

In a country that for six decades has suffered from shortages caused, above all, by the blockade imposed on it by the most powerful imperialist power, it is perhaps understandable that the concern has increased about the threat of worsening deficits that we have been facing or the possible appearance of new ones. Maybe it is even advisable not to abandon yourself to seeing something normal that is not: from the beginning the promoters of the blockade have been declaring that they are implementing it in order to make the social atmosphere of the country work like a pressure pump.

And they do not try to achieve a regular pressure pump, but one whose explosion shatters the revolutionary government. That’s right, although there are those who want to ignore it and, to use a popular expression, play the fool. The representatives of the empire have acknowledged that they try nothing more than to make Cuba fold. Not to leave things there, but to dominate it again as they did between 1898 and 1958, a criminal idea that – that is also clear, or murky – there are people for whom it is pleasing.

It is not necessary -not ethical, not even politically advisable- to ignore internal deficiencies, to appreciate in all its depth what the imperialist hostility, greater promoter of such deficiencies, has cost and continues to cost a Cuba willing to preserve the sovereignty that achieved victory in 1959. But less fair still is it to attribute all the misfortunes, or most of them, to internal errors.

That, a participant recently said in a talk on the subject, may account for the fact that sometimes those who attack the Cuban Revolution have a basically gastro-intestinal thought. Indications abound that there is the anatomical areas that guides them to take part in the war of thought – or lack thereof – aimed at delegitimizing a revolutionary project with medullarly roots in the people and, therefore, anti-imperialist purposes.

In just looking at social networks, it is perceptible that many of the opinions are in service of such delegitimization. And it is not about condemning in themselves the means of communication: the old media also served, and serves, for the good and for the bad, for the best and for the worst. The imperative is to pay attention to the motivations and attitudes of a significant part of the people who participate in the debates to condemn Cuba.

A visible feature of these is that they often neither read nor really refute what is written by those who defend – even with clarified critical perspective – the Revolution. Those people usually do nothing more than refute what they intend to present as written by those defenders, or they reproach them for omitting things they have clearly said.

And if the defenders of the Revolution propose that in the exercise of criticism one should be careful-neither timid nor exaggerated, nor fearful nor irresponsible, but careful-from the opposite side they accuse them of wanting to eliminate it, nothing farther from the truth. If they recognize a success of the Revolution, they insult them because they have not presented a rosary of complaints against the real -or alleged-mistakes committed by it.

If a revolutionary voice demands that social networks be used with a sense of responsibility and a vocation for discernment -without disproportion, such as resorting to a vast supranational platform to resolve a personal conflict with the administrator of a work center in the neighborhood, a dispute for the resolution of which there are institutional paths – the adversaries will find in it a reason to unleash their anxieties of uproar. They will see nothing better to do than to accuse that voice of having proposed the prohibition of social networks.

Certainly they -the predominant ones, (and it would not hurt that Cuba, without renouncing those, also founded its own) – were not created to help revolutions. But what the Mambises did with weapons that had not been manufactured for Cuba to defend its independence can be also done with them.

Clearly the Union of Journalists of Cuba calls its members to participate actively in these networks -in which not a few of them give battle – and try to help them to do it. But the counterrevolutionary hornets -showing here and there their touch or their ostensibly rabid attack, sometimes in the worst sense of the word- accuses it maliciously of speaking out against the use of such networks. The aforementioned hornet only wants them to be used against the Revolution.

If the media of the country – in printed or digital media, or in radio and television broadcasts – criticize a mess, and also in social networks, revolutionary voices fight it, and the problem is solved, members of the hornet will say that it was solved thanks to the fierce denunciation made in the networks by some of them. Adding bad intentions, they react as one who, after being cured of a serious illness thanks to a year of intense and successful medical treatment, assumes that he was healed by the concoction that in the eleventh month someone told him to take.

But from that the institutions of the country, including the press and its authorities in general, must also learn: they must be ready to apply the relevant measures to those who, due to neglect or non-compliance with their duties, or due to clumsiness, propotiate the interrogation of their information systems. Nor should they ignore that, no matter how much or how well the country does, the counterrevolutionary nest will deny it salt and water.

The revolutionary norm must be to act as efficiently as possible. Not in order to deserve the approval of wasps that will never give it, but for the good of the nation and the revolutionary project that has secured independence and must continue to guarantee dignity. Those enemies are far from those purposes.

Amidst the obstacles and hardships that are faced, the State continues to make large investments so that the population has increasingly broad internet services, despite the fact that the imperialist blockade has tried to prevent it. That has been the case even though, among the deceptions offered by Barack Obama to Cuba, there was the presumed desire to favor its technological advance.

Those who wanted to accept these fallacies as valid and good, will be largely, if not entirely, the same ones who today try to ignore the reinforcement of imperial harassment against Cuba. They do not care that the immoral and illegal siege is manifested by means of such a disgusting and internationally repudiated monster, as the so-called Helms-Burton Law.

The servants of the empire attack with abject brutality those who have the decency to defend their country against it. If two actors, guided by dignity, assume the same attitude that countless other patriots would assume, and condemn that monstrosity, there will be no shortage of enemies who will come across them with indecent rage. It is clear that rudeness and incivility portray those who practice it, but that reality makes more striking the silence that some maintain instead of defending those who have done nothing but represent the dignity of the country.

The worthy patriots are defended by their own attitude, and there were voices that praised their gesture. But the silence of some underscores the value of the question that a Facebook user asked: where were the cyber justices who defended, even with tenacity worthy of a much better cause, glassy characters or open cultivators of counterrevolutionary traps? Witch hunts should not be encouraged, nor should witches be poisoned by the atmosphere of a Revolution for which it would be suicidal to renounce the cleanliness and clarity of acts and ideas.

Nobody should allow themselves to be naive when the empire invests millions in so many means within its reach to promote subversion in Cuba, and has servants who support their plans. Thus, the counterrevolutionary bee hive will seek by any means to manipulate reality and the news, whether they talk about chicken, oil or actors, or any other matter.