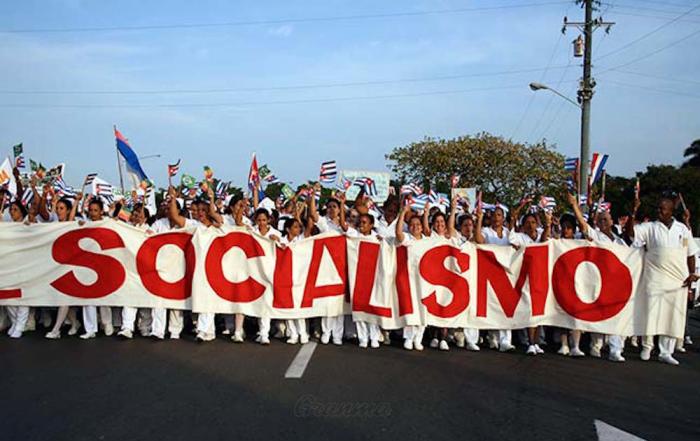 Marx described communist society as an association of free individuals: “The only society in which the free development of individuals ceases to be a mere phrase”.

Socialism resembles the man, just as fascism is the negation of man. Socialism is “the way” -not exempt from errors- to communism, it is a path of justice full of obstacles, marked by challenges, setbacks and advances. “In the socialist construction we plan the headache which does not make it scarce, but quite the opposite. Communism will be, among other things, an aspirin the size of the sun”. 1

Capitalism seeks to sow the lack of faith in the human being, exalts cynicism, the revered ego, as Ayn Rand defined the ideal man of capitalism: “While the creator is selfish and intelligent, the altruist is an imbecile who does not think, do not feel, does not judge, does not act”. 2

Prior to the French Revolution there was a deep battle of ideas in Europe, before the revolutionary uprisings, a new way of seeing the world made its way. The Enlightenment sowed the seed that propitiated the Revolution. A consensus was created throughout Europe, a international spiritual bourgeois emerged. “Every Revolution has been preceded by an intense work of criticism, of cultural penetration, of a permeation of ideas”. 3

If our way of seeing the world is marked by the axiology of capitalism, if our basic principle is still “to have” at all costs above “being”, if selfishness is the sign that moves our lives, if we see misery as a kind of fatalism and the society divided into classes as something natural and immutable, if we do not have faith in the human being and in his capacity for surrender, in his altruism, what are we talking about?

It is not about the missiles, it is not about armies, it is not about police forces through which the powerful solely guarantee their dominion, the defenses of capital are in the unconscious of individuals and are more powerful than the most modern weapon developed by the military industrial complex. They make the dominated act against their interests and defend governments that overwhelm them. It is difficult to free oneself from the narcotic dream of consumption and atrocious individualism.

In capitalist society, man lives an illusion of freedom, he is a commodity and between commodities – for that is the man of capitalism – there can be no solidarity, but competition.

The loneliness of a man crushed by the productive machinery and trade is the sign of capitalism, is the alienated human being subjected to propagandistic violence, besieged day and night, surrounded by siren songs, manipulated and bought to buy and buy things to which often he can not access, or objects that he does not need at all. The situation of man in underdeveloped capitalism, totally depreciating its mercantile value, is even worse.

Man’s natural fear of venturing into the unknown world of freedom is shrewdly exploited by capitalism. The man who discovers that world has two options before the restlessness generated by such a discovery: either he returns to the lost calm or declares himself free and risks changing the world and building relationships based on love.

Our Constitution defines in its preamble the conviction that Cuba will never return to capitalism and that only in socialism and communism does the human being attain full dignity.

The first article of the Constitution clearly states that Cuba is a socialist state of social, democratic, independent and sovereign law and justice, and Article 5 reaffirms that it is the Communist Party of Cuba, unique, Marti, Fidelista, Marxist and Leninist, the avant-garde organized by the nation, the leading political force of society and the State that organizes and guides the common efforts in the construction of socialism and the advance towards the communist society.

We are on the path we chose and defend: socialism with its past and its genesis of the future. Socialism as a way to the realm of full human realization, the society of well-being, of good living, not only because of the levels reached of justice and equity, but also because of the high rates of development, the result of advances in the sciences, in technology, of the means of production and the productive forces, unchained, free, highly qualified: the communist society.