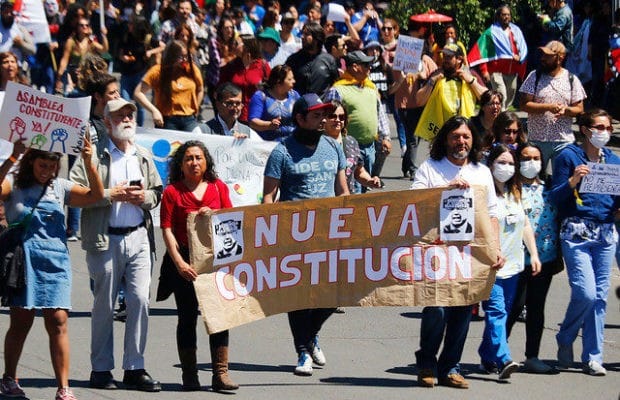 The history of Chile is paved with scams, and torpid maneuvers to hide the crimes committed by the country’s powerful.

Scams in politics, in public administration, in business, in the courts, in the army, in the police, in municipalities, in universities, etc. Until now we believed that the biggest scams are those committed by big businessmen who evade taxes and transfer their profits to tax havens.

But no, what was still missing was the Great Scam, the historical scam, that one that pretends to go through the hoop to the whole country. We finally have it. It is being committed by the political caste that tries to make the citizens fall into the trap of a “Constituent Convention” tied hand and foot, incapable of changing anything and whose resolutions will be rigged from now on by the puppeteers of politics.

What the people have been demanding for two months on the streets – at the cost of cruel violations of their human rights – is an independent and sovereign Constituent Assembly. An Assembly with free hands to draft and propose a new Political Constitution without the oligarchic interests that administer this country as a fief.

We Chileans have been demanding a new Constitution for years. Under the dictatorship that demand was raised which was accepted by the clandestine parties, the same ones that later became the government and forgot their promises, the same ones that now once again mock democratic principles and prepare a parody of the Constituent Convention.

A Constituent Assembly such as that demanded by the rebellious people since October 18 would allow for the first time in our republican history – plagued by civil wars, coups d’état, dictatorships, worker massacres, political crimes, social and racial inequality, and waning democracies – the Political Constitution, mother of all laws and civil and military institutions, to be written by the sure hand and fraternal genius of the Chilean people.

But the political caste could not allow that hope to materialize. Moors and Christians – among them perhaps also a couple of absent-minded fools – conspired on November 15 to give birth to a monster they baptized “Agreement for Social Peace and a New Constitution.” It is the typical hypocritical and sibylline document of our political caste. Under the guise of yielding to the demands of the insurrected people, what it is really doing is closing the way to an independent and sovereign Constituent Assembly. The mechanism was perfected by a “technical commission” of the accomplices of the operation. Finally, that move -another fruit of the inexhaustible cunning of the Chilean oligarchy- will be sanctified by Congress, promulgated as a constitutional reform and put into practice as of the plebiscite of April 26.

The conspirators did not even grant that the Constituent Assembly be called as such. Their scam is called “Constitutional Convention.” They even feared the name of the stellar moment of the sovereignty of peoples that is the Constituent Assembly. That was the name given to the one that in 1789 proclaimed in France the Rights of Man and of the Citizen, and that is the name given to those that continued to build the universal history of democracy.

The colossal scam underway is intended to make Chileans passively accept a “Constituent Convention” that lacks any independence to do its job. The parties that promote it, hold records of discredit and the same Congress that will give the final darning. The way in which it has been planned allows us to anticipate what the Convention will or will not be able to do and what matters it will decide without colliding with the quorum of two thirds. The usual twists and turns and tunnels of parliamentary business and the insurmountable fence of the quorum will make it impossible for the few conventional independents to impose the changes that Chile is crying out for in the streets. The details of the installation of the Convention, the way to elect its authorities, the modalities of work, etc., have all been foreseen. The parties that try to hide from the people their right to decide the content of the new Constitution have provided for everything, with the thoroughness demanded by the great political crimes of history.

It takes a strong reaction from the people to denounce the scam and defend their right to an independent and sovereign Constituent Assembly.