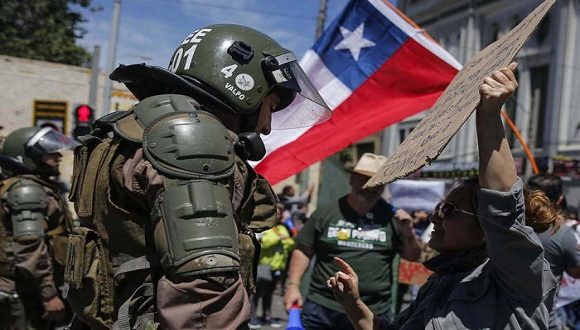 During a live broadcast, the journalist Paola Dragnic and her cameraman were assaulted by police officers when they reported on the toxic elements they use to repress demonstrations with water cannons.

“At this time our correspondent Paola Dragnic is besieged by police from Chile. They pressure her so she can’t report, ”denounced the president of the international network, Patricia Villegas.

The journalist was harassed when referring to the report of the Health in Resistance Movement (MSR), revealing that the water launched by police to suppress massive demonstrations contain caustic soda and pepper gas compounds, toxic elements harmful to people’s health.

The president of teleSUR regretted the attempts of the Chilean authorities to prevent information from viewers in the region , “they tried to end the live broadcast, we will not do it. We are still live,” she added.

RELATED CONTENT: Chilean Justice Admits a Complaint Against Piñera for Crimes against Humanity – Could Lead to 20 Years in Prison

Likewise, the journalist Paola Dragnic stressed that the Citizen Consultation carried out in several communes of the country, had the participation of more than two million citizens who demand a new Constitution.

The objective of the non-binding citizen consultation is to gather opinions on the Constituent process and social priorities in the country; the day-long event was held in more than 220 of the 346 existing counties.

The main issues that citizens want addressed are improvements in pensions and dignification of the quality of life for older adults; improvement of public health and its financing; access and quality of public education. In the country the protests continue.