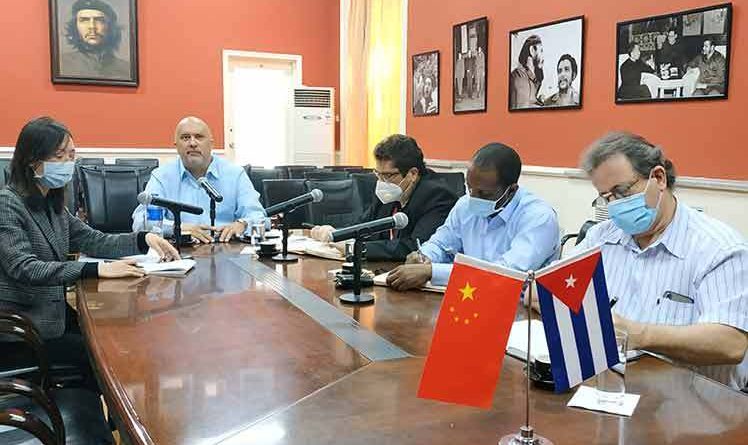 May 14, 2020.- China and Cuba decided on Tuesday (12) to accelerate a project that will create the first joint biotechnological park to research, develop, produce and commercialize medicines obtained in the Caribbean State, of proven effectiveness and worldwide recognition.

In addressing the issue, the island’s ambassador in Beijing, Carlos Miguel Pereira, and Huang Liansheng, president of the company Guangxi Fukang Medical Investment and Management Co Ltd., agreed that this is essential and priority work for bilateral cooperation.

They emphasized the importance of resuming and following the steps previously agreed to, in the new stage, to advance in the preparation of installations and the mobilization of Cuban scientists.

Pereira considered that the construction of the biotechnological park will pave the way for other large-scale plans in a sector where both countries have solid links.

He thanked the management of Guangxi Fukang for giving it impetus and emphasized its greater relevance because it coincides with other initiatives by Cuba and the top health, science and technology bodies in China, aimed at developing certain products and therapies that can be linked to joint cooperation with third countries.

In turn, Huang announced that the project is among the main ones in the autonomous Zhuang region of Guangxi (south), the local government has promised preferential policies, full support and has already delivered 33 hectares of land for the first buildings.

In addition, it offered an update on the procedures and different aspects of this plan and welcomed the ambassador’s proposal to hold a meeting with experienced Cubans on specific issues later on.

The biotech park is an agreement of the Biocubafarma group with Guangxi Fukang, and will be installed in the Fangchenggang Development Zone, which has the prospect of becoming an experimental industrial pole in research and obtaining medicines for China and the Association of Nations of the Southeast Asia.

It includes the construction of a cooperative platform to provide better public health services and of a mixed firm that will prepare medication from the Caribbean country for heart disease, cerebrovascular diseases and different types of cancer, among others.

Among the initial products will be Melangenina, Heberferón, Proctokinasa and the therapeutic vaccine against hepatitis B, all with proven results and wide prestige in the global market.