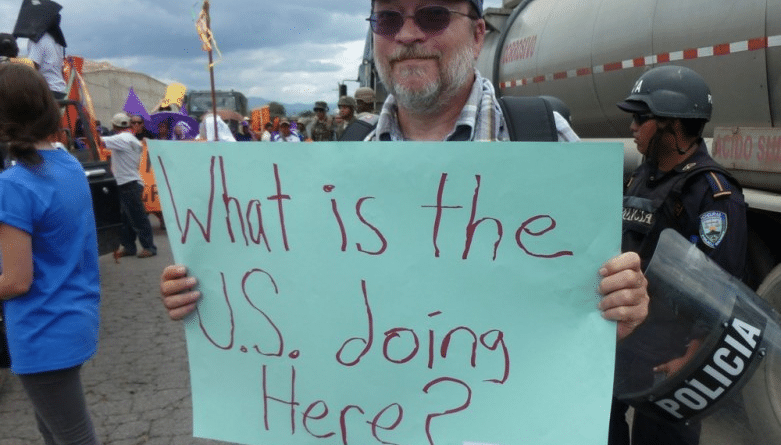 Chuck Kaufman was a great man who had a tremendous influence on me (and probably others). He was such an excellent model of what an anti-imperialist organizer is. I am sure people who worked with him were impressed by the great political common sense he possessed. Activists recognized this in him, and gave his views and suggestions a lot of weight. I learned so much about how to be more effective from him, given his years of organizing experience on a national level.

He recognized what other activists were good at, what they were not good at, and the good sense to try to fit them in where they most benefited the movement.  He would quite easily explain to me – and others – how we could improve our work, make it more productive, and always did it in a careful and helpful manner. These are qualities of an outstanding organizer.

That does not mean he could not be abrupt with me or others if he felt we were not altering some counterproductive behavior. And he had little time for discussions with people who held to illusions that the Democratic Party was somehow a more benevolent imperialist party than the Republican. I saw that when I first met him, on a delegation to Venezuela in September 2008. As I recall, we were the only two who did not want to waste our time talking about how candidate Obama was going to change the world.

He had one goal in life: to dismantle the US war machine before it dismantled more of us.

He was one person, who when he called for unity, actually meant it and acted to build it. In collective work, he made it his priority the goal of finding a common, agreed upon basis for accomplishing successful political work together.  He sought no special place for himself, no special recognition for himself. What he prized above all was building the movement and how he could best contribute to that.

He was always one to put his capabilities and the weight and resources of the Alliance for Global Justice at the service of building the movement with no ulterior motive in mind.

Chuck always, always kept very clear that there is one enemy we are fighting, one alone: US imperial interference in other countries and the high price we pay for it at home. He never confused that by operating as if some other particular individual or organization was an enemy – as so many of us are wont to do. And his opinions of other activists and groups was primarily based not on his likes or dislikes, which he clearly had, but on how effective they were or could be made to be fighting our common enemy. As we probably know, most leftists in the US (as with other people) are not like that.

His goal was to change brutal US government policy: How can we have an impact by being an obstacle in the way of Washington’s inhumane policies towards some country. His real power was not as a writer or speaker but as an organizer, who had the authority to bring diverse and often competing groups together to work on achieving some goal, one that meant forcing a change on the US rulers.

One of his favorite quotes – from Frederick Douglass – sums up his approach: “The whole history of the progress of human liberty shows that all concessions yet made to her august claims have been born of struggle… If there is no struggle there is no progress… Those who profess to favor freedom and yet deprecate agitation, are [like those] who want crops without plowing up the ground… The struggle may be a moral one, or it may be a physical one; or it may be both moral and physical, but it must be a struggle.  Power concedes nothing without a demand.  It never did and it never will.”

His organizational abilities are well-illustrated with his co-founding and building Alliance for Global Justice from a vision into what it has become today. This is often characteristic of innovative self-made businessmen, which he had been before he felt compelled to devote all his energies to combatting the 1980s US war on Nicaragua. Those of us who worked with him have seen that he had brought no small visions to the work, and displayed an excellent organizer’s ability to make these visions a reality.

I worked with him only in some of his work – Venezuela Solidarity, Latin America Solidarity Coalition, SOA Watch protests, US Social Forums. Many others have their remembrances of him, those he worked with on defending the people of Nicaragua, Colombia, Honduras, and defending Cuba, the Cuban 5 (including taking care of Fernando Gonzalez’ family on their visits to him in prison in Arizona), Occupy Wall Street, the war on Iraq, Palestine, Syria, standing up for migrants on the border, the list goes on.

In the 1990s his sweetheart went missing for several days in DC, and after some time was found murdered. The police showed no interest in investigating the case, in part because she was Black. Her murder had a deep and permanent impact on him. Nobody took her place. Single people do not do well living by themselves, and men in particular are not known for practicing personal self care. He was no exception. He seemed to know the end was near in 2021 by taking his long road trip around North America to visit long term high school and college friends, later friends, and a number of relatives.

I knew when we were last together, in September 2021, that this was the last time I would see him. It’s not easy to say goodbye to someone when you know you will never see them again. I could tell it was coming, but when it does, it is still a surprise. We operate thinking what we have in our world will always be here, when in reality, nothing is, everything is temporary. Now he is gone. But he lives on, his example lives on in many of us.

Featured image: That is the question Chuck asked. Not about the government “there,” but why is the US there, and what are we doing about it.