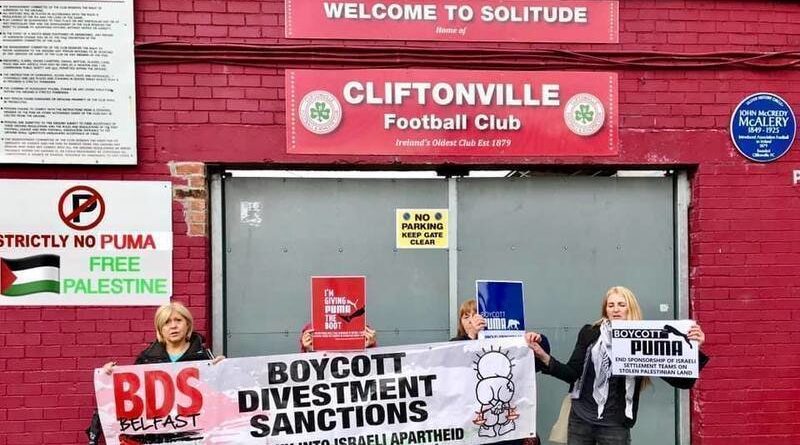 On Saturday May 29, 2021 the game between Cliftonville FC and Linfield FC  was interrupted by a small group of protestors. Carrying a Palestine flag and a banner that proclaimed to the world ‘Boycott Puma’.

This interruption was to highlight the ongoing commercial relationship between Cliftonville Football Club and Puma, a major global corporate sports brand.

How did a small club in the Irish Football Association become involved in a worldwide boycott movement?

Puma is an official sponsor of the Israel Football Team.

Israel has been described as an Apartheid state.

‘On the basis of its research, Human Rights Watch concludes that the Israeli government has demonstrated an intent to maintain the domination of Jewish Israelis over Palestinians across Israel and the OPT. In the OPT, including East Jerusalem, that intent has been coupled with systematic oppression of Palestinians and inhumane acts committed against them. When these three elements occur together, they amount to the crime of apartheid’.

For Cliftonville football club as a promoter and champion of the slogan ‘Give Racism The Boot’ it seems hypocritical to call for an end to racism in football here while accepting sponsorship from a global company that stands accused of supporting an Apartheid regime Israel.

RELATED CONTENT: The Fall and Rise (and Fall?) of Apartheid

A change of kit sponsor will not materially affect Cliftonville FC.

Unless the Board of Clitonville FC put the money they receive above the lives of Palestinian children it would be unconscionable and immoral for them to continue with this sponsorship deal.

Now is the time for the Board to unequivocally and publicly state they will cease from accepting monies from companies which support Apartheid states .

Cliftonville must stand on the right of history.

BDS global action and the Palestinian and Cultural Boycott of Israel statement,

‘Puma is the only international sponsor of the Israel Football Association (IFA), which includes teams in illegal Israeli settlements on occupied Palestinian land.

Puma’s endorsement gives legitimacy to Israel’s illegal settlements pushing Palestinian families off their land and its attacks on Palestinian sports. Israeli snipers ended the careers of dozens of Palestinian athletes in Gaza in 2018 alone.

Palestinian teams and athletes are calling for a boycott of Puma until it ends its sponsorship of the IFA’.

There is a long and proud history globally against injustice and apartheid states.

During the 1969 -1970 South African rugby tour of Great Britain and Ireland thousands protested in the streets and on the pitch disrupting games demanding an end to Apartheid in South Africa.

We are now revisiting history with the pitch invasion at Cliftonville’s ground ‘Solitude’ last Saturday.

Cliftonville FC, please from our own history, remember Belfast Celtic FC forced out of the Irish league and remember Derry FC now playing in the Football Association of Ireland league.

Most of all remember the 67 dead Palestinian children.Their mothers and fathers.

The displacement of up to 58.000 people (UN figures) now homeless refugees, alongside massive destruction to the infrastructure and health facilities, in and of itself should be enough to dissuade you from continuing your links to Puma.

Boycott Divestment and Sanction, BDS is a global movement.

Boycott ‘withdraw from commercial or social relations with (a country, organization, or person) as a punishment or protest’