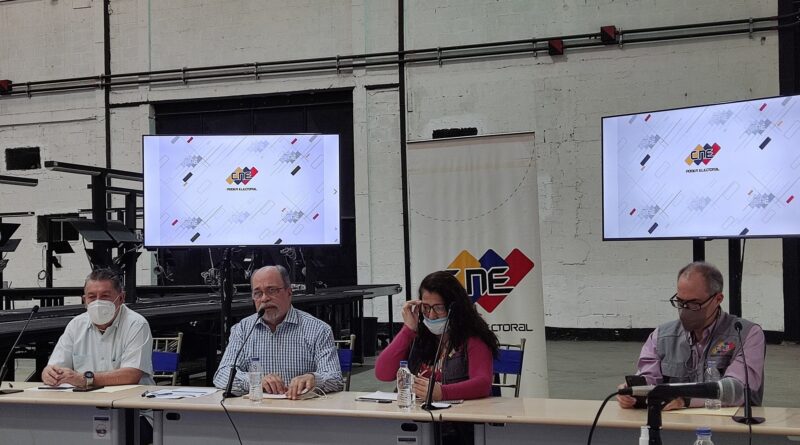 One week before the November 21 Regional and Municipal elections in Venezuela, the 11th audit (pre-production audit) of 155 voting machines (0.5% of the total number) was carried out this Sunday, November 14, in the warehouses of the National Electoral Council (CNE) in Mariche, Miranda state. These machines were chosen at random for evaluation, in order to provide greater assurance and security to voters, and the audit was carried out in the presence of accredited witnesses from all political parties and international observers.

The information was released by the president of the National Electoral Council, Pedro Calzadila, from the warehouse where the audit was conducted. CNE’s pincipal rector Tania D’Amelio, and rectors Alexis Corredor, Roberto Picón, Carlos Quintero and Leonel Párica were also present at the audit, reported Calzadilla.

The CNE president explained that at the end of the audit day, a report will be released with all the details of the process. “So far everything is progressing as we had expected,” he added.

Calzadilla assured that 89% of the electoral schedule has been completed. “Already 100% of the voting machines, meaning 30,106 machines, have been sent to all the states, ready to be placed in the 14,262 voting centers throughout Venezuela,” Calzadilla informed. “The electoral material kits are also in their places.”

The national electoral authority of Venezuela reiterated that modifications to candidacies received later than the legal deadline will not be reflected on the ballot, as it has been stated in many occasions before that deadline was reached at 11:59 pm of November 10. CNE stated this in reference to the resignation of opposition politician Carlos Ocariz of the Democratic Unity Roundtable (MUD), who resigned his candidacy for the governorship of Miranda state. Hence, that post is now going to be disputed between opposition candidate Rafael Uzcátegui of Fuerza Vecinal party and the incumbent candidate Héctor Rodríguez of the PSUV.

As part of the electoral schedule, in the last week prior to the elections, all voting centers were disinfected on Saturday, November 13, corresponding to the strict protocols to contain the COVID-19 pandemic.

Over 21 million Venezuelans who are in the electoral rolls for this election will elect 3,082 positions, and about 70,000 candidates are contesting for these posts. The electoral process will be supervized by 2,000 prosecutors throughout the country, to ensure compliance with all regulations.

The highest authority of the CNE welcomed the participation of the international observers who will observe the elections, and also 262,284 witnesses from political parties who have already been accredited.

“We welcome the international observers who are here in this electoral process,” stated Calzadilla. “Groups of them are already deployed in the country, in different preparatory activities for the elections. Here [at the audit center] we are with two observation delegations, one from the Republic of Angola and the other from the Carter Center.”

The CNE president called on the board members to complete the training task that is being carried out through the CNE website. He further added that through the hotline 0080-VOTEMOS they can check if they were selected for this work, and sending their identification number with a text message to 2637, they will receive the information about the voting center.

#Venezuela | "CNE President Pedro Calzadilla rejected the attempted attack on the electoral system and reaffirmed that the State institutions are ready to guarantee all the security of the process. The sabotage attempt was stopped by security forces." https://t.co/Ct2HJR9eIM

At the very same venue that was targeted by a terrorist group in possession of explosive devices and subversive material the previous day, Calzadilla held this press conference informing about the progress of the electoral process.

Calzadilla condemned the attempted attack on the electoral system and reaffirmed that the State institutions are ready to guarantee the security of the process. The sabotage attempt was neutralized by Venezuelan security agencies.

Featured image: CNE President Pedro Calzadilla, accompanied by CNE board members, during a press conference on Sunday, November 14, at the main warehouse of the CNE in Mariche, Miranda state. Photo: Twitter / @cneesvzla