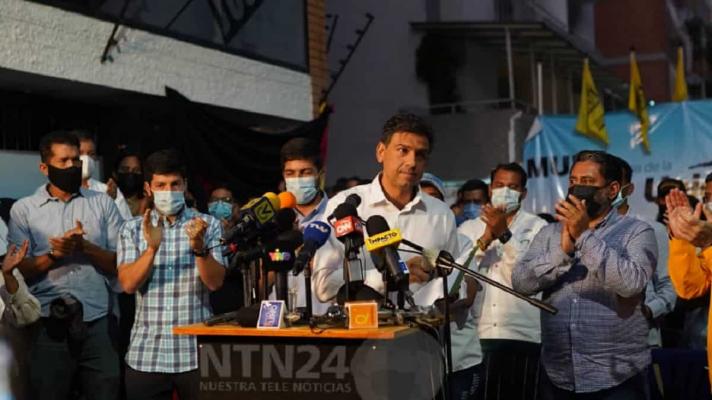 The announcement of Carlos Ocariz’s resignation as candidate for the governorship of Miranda state has become relevant news related to the November 21 elections in Venezuela; however, this could well be a maneuver by the G4 parties directed against Fuerza Vecinal (FV) candidate David Uzcátegui.

According to journalist Madelein García, and as is apparent from the events themselves, the parties of the so-called G4 platform (Voluntad Popular, Primero Justicia, Acción Democrática, and Un Nuevo Tiempo) may have forged a strategy to discourage the rise of Fuerza Vecinal as an organization that is taking over the old G4 political strongholds during the latter’s electoral abstentionism period starting from 2018.

The brand new Fuerza Vecinal party, which has the support of several opposition mayors of Chacao, Baruta and El Hatillo (Miranda’s most important opposition axis), emerged as a leading force in the heart of Primero Justicia‘s (PJ) historic bastion.

Once the abstentionism parties had returned from their self-imposed exile, they imposed Carlos Ocariz as the candidate of Democratic Unity Roundtable (MUD) for the November 21 elections. Ocariz pressed until the last moment for the resignation of Uzcátegui, in the midst of a tirade with serious accusations between the two candidates and their camps.

Ocariz accused Uzcátegui of being a “false opponent,” “Hector Rodríguez’s [PSUV candidate and incumbent governor of Miranda] campaign manager,” a “divisionist” and an “electoral delinquent.”

The maneuver in detail
Although the announcement of Ocariz’s resignation on November 11 has been referred to as a gesture of “political maturity and unity,” the parties grouped under the MUD did not adopt the necessary procedures to transfer their support to David Uzcátegui, and they only ended up leaving their governor position in the ballot without a name, de facto making it useless.

According to Venezuela’s Organic Law of Electoral Processes (LOPRE), the parties are the owners of their spaces in the ballot. According to journalist Madelein García, the MUD coalition could have withdrawn their support for Ocariz before the November 10 deadline for candidacy modifications so as to actually support Uzcátegui’s candidacy.

Hence, Ocariz’s “emotional” resignation on November 11, in tears and in front of a crowd, appears to be just a stage acting to propagandize an image of political unity, hiding an underlying possibility of something different.

Having resigned at the wrong time and without the MUD requesting the National Electoral Council (CNE) to officially shift MUD’s candidacy to Uzcátegui, Ocariz has left the MUD ballot space for governor captive. Any voter, believing that he is supporting Uzcátegui by casting his vote in that space in the ballot will be giving a null vote for the governorship of Miranda.

Until now, MUD representatives have not disclosed to the public if they have made any application to the CNE to officialize their support for Uzcátegui.

According to electoral analyst Eugenio Martínez, until this Friday, November 12, there has been no information available about “agreements” between the opposition factions, nor any public evidence that the MUD has decided to support Uzcátegui.

Martínez, in a Twitter post, considered that “it is necessary for both MUD and Fuerza Vecinal to clarify to their voters what agreements have been reached and also the date (the day and hour) in which the CNE was notified of such agreements and the substitution.”

Martínez opined in his tweet that although the deadline for ballot changes elapsed on November 11, “all the agreements between MUD and FV should have been notified (to the CNE) before the last minute.”

“Actually,” added the analyst, “the problem was not Ocariz. It was the MUD-Fuerza Vecinal agreements. They could have notified the agreements to the CNE without waiting for Ocariz’s resignation. What arrived late was the MUD-FV agreement.”

It is worth noting that even in his resignation speech, Carlos Ocariz did not openly express his support for David Uzcátegui; on the contrary, in the absence of a united communiqué, until now there has been no frontal support from MUD for Uzcátegui.

All of these facts reinforce the hypothesis of a possible MUD maneuver.

By prematurely defeating Ocariz’s candidacy, MUD preferred to withdraw its candidate and avoid getting a third place in the polls, while, at the same time, not having to openly support Uzcátegui by making a deliberate and delayed move.

Moreover, MUD could then proceed to delegitimize the CNE and hold it responsible for something that, instead of supporting Uzcátegui, harms him.

Hence, MUD could have well forged this strategy to weaken Uzcátegui’s chances, propitiate his defeat and thereby disable the rise of FV as a new opposition leading force in Miranda, Primero Justicia’s “turf.”

Official deadline reached
The CNE has formalized 612 modifications, 530 adhesions and 58 resignations during the third phase of the candidate nomination process for the 2021 Regional and Municipal Elections. These correspond to nomination substitutions and modifications that will not be reflected in the voting ballot.

During Phase 3 of the modifications of nominations and nominal positions process, the CNE received 3,151 requests for modifications from political parties and coalitions.

After the modification period has come to a close, the National Electoral Board (JNE) will continue to process the modification and adhesions requests that were received in a period of up to 10 days before the November 21 elections, as is established in the Article 63 of the Organic Law of Electoral Processes (LOPRE) of Venezuela.

Featured image: Carlos Ocariz announced on November 11 that he was “stepping aside” as the MUD candidate for Miranda governorship, but something smells “rotten” in his statement. File photo