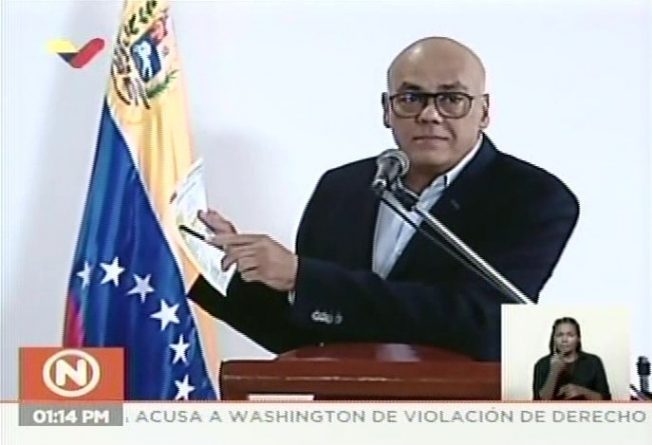 The minister of communication and information, Jorge Rodriguez, offered details on Thursday of the talks of the irregular group Cocoon 2.0, constituted by different Venezuelan opposition leaders, who planned to execute different actions to continue destabilizing the country’s economy, highlighting among them the blocking of Visa and Mastercard payment systems, as well as the cybernetic sabotage of the Patria platform, also complemented by a communicational campaign in which they blame the Venezuelan President, Nicolás Maduro.

At a press conference from the state of Bolívar, Rodríguez explained that the investigations after the arrest of Roberto Marrero’s showed that a group called “Cocoon 2.0”, planned at least three actions to destabilize the country:

“The threat by the government of Donald Trump, that the transactions with credit cards and debit cards were going to be eliminated, was planned in this Cocoon 2.0 group,” Rodríguez explained.

He showed a series of messages among Cocoon 2.0 participants; one of them, Gustavo Tarre Briceño, said that “this would be a catastrophe, since 99 percent of the debit cards are Maestro (MasterCard), more than 70 percent of the transactions are MasterCard and Visa, so it would collapse the Venezuela’s payment system. ”

Another participant points out that this would affect those who have international Visa and MasterCard cards and use them in Venezuela. “This blocks what the BCV tried to stimulate through the arbitration with Dicom, the use of foreign cards in Venezuelan points of sale. We must verify the use of Mastercard and Visa cards issued by national banks. ”

“The idea is not to block only international cards but to block payment processing. That would be excellent, “says Mr. Marrero in the chat. Penfold says that it is very regressive, complicated and you have to think about it well because “if it is done badly, the cost is paid by us”.

Another person, Octavio Lara, says in the chat that, if the plan is executed, “our problem will be communicational. You have to start a campaign that this, like electricity and water, is Maduro’s fault. ”

Rodriguez also noted the observation of another person in the chat: “A decision like this affects negatively and existential everyday life of 100% of the people who accompany us to the marches and rallies that Juan Guaidó has managed to reactivate”.

In another part of the conversation, he asks himself what to do with the Patria platform, which would surely be used as an alternate mechanism of payments, what hacks and cyber attacks could be proposed against it.