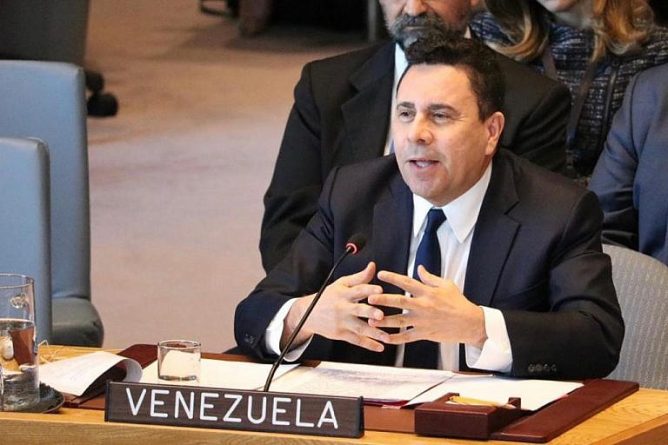 During the new meeting of the UN Security Council this Wednesday on Venezuela, convened by the Vice President of the United States, Mike Pence, the ambassador of Venezuela to the UN, Samuel Moncada, demanded a stop to the war that the president of the US, Donald Trump is waging against Venezuela. Russia and China supported the Latin American country, denouncing the multimillion-dollar losses that US sanctions and aggression have caused the country.

The Security Council of the international organization met for the third time since January, to discuss the situation in the Latin American country. On this occasion, the Secretary General, António Guterres, and the Under-Secretary-General for Humanitarian Affairs, Mark Lowcock, were in attendance.

In his speech, the vice president of the United States, Mike Pence, assured that the UN must recognize the deputy Juan Guaidó as alleged legitimate president of Venezuela.

In addition, he announced “new actions” against Cuba for his support of Nicolás Maduro’s government, and tried to intimidate that country and Iran because “they are doing everything they can to help Maduro”.

In a despotic and arrogant manner, Pence attacked  Moncada and said: “Mr. Ambassador, you should not be here. You should go back to Venezuela and tell Nicolás Maduro that his time has run out. It’s time for him to leave.” In addition, he demanded that the Security Council “revoke the credentials of the representative of Venezuela before the United Nations,” and that it should “recognize the interim President Juan Guaidó and allow here the representative of the free government of Venezuela, without further delay”.

Moncada began his speech clarifying the situation that the US vice president created about the supposed expulsion of Venezuela from the Organization of American States (OAS). In addition, he reported that in his eagerness to destabilize the country, they sacrificed the fundamental charter of the organization (OAS) and twisted the law approving the inclusion of a member of the Venezuelan National Assembly as representative to the OAS.

He denounced the United States’ intention to turn the UN into a meeting place for Trump’s friends in favor of the well-known Monroe doctrine, dating back 200 years, when the American nation was a slaveholding and openly racist country.

The Venezuelan representative also denounced the US government for depriving the Venezuelan people of their primordial goods with the sanctions imposed while “the profits of the refineries have been confiscated to pay Trump’s friends”.

This country (the US) seeks to provoke “a social implosion that allows a military intervention in Venezuela”. “It is an inhumane experiment, all with the object of justifying the pillage and looting.”

On the humanitarian situation in Venezuela, Moncada assured the Council that it must be attended to, with much care not to misrepresent or confuse the diagnosis in order to adequately solve it.

He reiterated that the Trump government “terrorizes” those who want to sell food and medicine to Venezuela, threatening them with sanctions if they touch Venezuelan money. He explained that Venezuela has the money and funds to buy these medicines and food, but the US terror campaign seeks to implement a program of economic destruction against the country.

The Venezuelan ambassador also denounced the US for seeking to make a covert economic blockade against Venezuela, without the consent of the UN Security Council.

He deplored the lack of pronouncement by the UN about the attempts of interference, military threats and the theft of Venezuelan money by the British government, and recalled that articles 24, 34 and 39 of the UN Charter indicate that the United Nations has the responsibility to maintain the peace and security of the (member) countries.

Moncada also was against the United Kingdom offering 9 million dollars to Venezuela as “aid”, while the Bank of England retains more than 1.2 billion dollars belonging to Venezuela. Although the government of the United Kingdom affirms that said bank is independent in its actions, the bank indicates that the money is retained due to the “sanctions” imposed by the US government, according to Moncada.

“The solution is not in donations from countries that want to present themselves as saviors.” He asked that the looted money to be returned to Venezuela, the cessation of the economic blockade against the nation and the cessation of sabotage to vital installations with clandestine operations. “We must stop Trump’s war, and this Security Council must guarantee the right to peace” he emphasized.

Russia: The United States caused losses of billions of dollars since 2013
On the other hand, the ambassador of Russia before the UN, Vasili Nebenzia, accused the US of causing considerable economic damage to Venezuela and said that Washington “artificially caused” a crisis to overthrow the legitimate Government. The Russian ambassador has estimated in billions of dollars the general damage caused to the Venezuelan economy by the US measures. since 2013.

“Today we are witnessing another episode of a drama in various acts in an attempt to change the regime in Venezuela. The situation in Venezuela does not represent a threat to international peace and security. However, external actors directly threaten the peace and security of Venezuela” said the permanent representative of Russia to the UN.

Nebenzia also advised Washington to stop interfering in the affairs of other states if it really wants to “get great again”.

“We urge the US to finally recognize the right of the Venezuelan people and other peoples to determine their own destiny. If they want to make the US great again, which is something we are all really interested in, stop interfering in matters of other states,” he said.