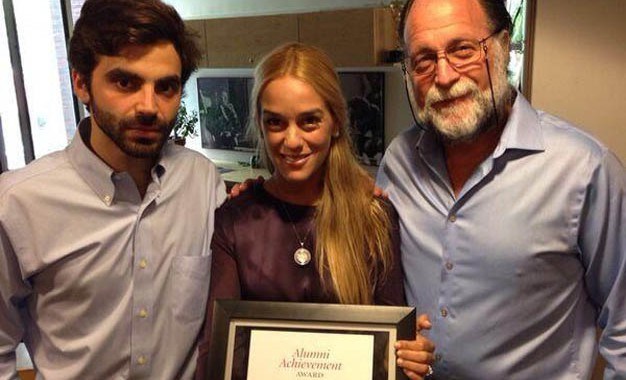 The revelations about the existence of a consulting group under the code name “Cocoon 2.0” and formed by businessmen and private advisers, that discussed financial and political offensive actions against Venezuela, together with Juan Guaidó and Leopoldo Lopez, confirms that behind the conspiracy are very defined sectors of the commercial and importing bourgeoisie.

The data offered on Thursday by the Minister of Communication, Jorge Rodriguez, is added to a whole series of information that allows us to understand that self-proclamation is a corporate project where the academic of Harvard University, Ricardo Hausmann, stands out as a conductor.

In fact, the Country Plan is not new as its formal creation dates back to March-April 2011 during a conference at Yale University in the state of Connecticut attended by Venezuelan students from study centers such as Georgetown University in Boston, New York, Tufts, Miami International, Northwestern, among others.

All are universities sponsored by private corporations, with tuitions that average $50,000 a year, so it will be understood that their students are part of a true elite that could not even be compared with those who study at the most expensive Venezuelan universities.

Among the student organizers of the first conferences were Agustin Paniagua, Ilan Szekely Levy, Nelson Ortiz, and Joanna Hausmann Jatar, this last daughter of Ricardo Hausmann, and since 2009 had been raising the formation of an organization that brings together that managerial elite, direct descendant of business family groups.  While Ricardo Hausmann, Nelson Ortiz, Ana Julia Jatar, Ramon Espinasa and Luis Pedro Spain, among othets, participated as speakers.

Plan País is a kind of “think tank” (knowledge production center) and propaganda laboratory that was registered as a non-profit corporation in the state of Connecticut in November 2011 and whose founding directors are Juan Pío Hernández, Agustín Paniagua, Ilan Szekely, Nelson Ortiz and Carlos Ruiz. They are still their current managers.

They are graduates of Georgetown or Yale with jobs in private banking companies or economic consultancy in the areas of Washington, New York or Boston, and their clients are speculative investors, vulture funds and business groups oriented towards Latin America.

In the following conferences (which take place annually in the first quarter) the neoliberal profile of the project was defined with a more open presence of the Hausmann team such as Miguel Angel Santos, José Manuel Puente or Rodrigo Diamanti (arrested in the “guarimbas” of 2014).

As well as continued participation in the oil issue of Ramón Espinasa (PDVSA chief economist deceased recently), Francisco Monaldi (IESA-Kennedy School-Baker Institute) and Luisa Palacios, “designated” by Guaidó as a kind of CEO of CITGO

Also from 2015 the conference strengthened its propaganda aspect with the incorporation of “spokesmen” and “preachers” like Laureano Márquez, César Miguel Rondón, Valentina Quintero and Asdrubal Aguiar of IDEA, the body that brings together neo-liberal ex-presidents of Latin America and Spain as Aznar, Oscar Arias, Laura Chinchilla, Pastrana or Tuto Quiroga.

Through the conference of the Country Plan (Plan Pais) in 2014 they began to project internationally Juan Requesens, Rodrigo Diamanti and Roberto Patiño Guinand (pay attention to that name in the next lines.)

But let’s go back to 2015 when a conversation between Ricardo Hausmann and Polar’s president, Lorenzo Mendoza, was revealed. “I am at war,” the businessman told the economist, who in turn commented that the amount of financing from the IMF, required by Venezuela, was estimated at 60 billion dollars.

Related content: Bloomberg Publishes an Article by Guaido Imploring the Chinese for Support

The plan of Hausmann, exposed grosso modo from 2014, foresees a moratorium or suspension of payments of the external debt and to destine those resources and the originating ones of the multilaterals to recover and maintain an import rate similar to those of years of Cadivi and that arrived in 2012 to exceed 50 billion dollars.

That program is maintained and this has been confirmed by a meeting held by Miguel Angel Santos (second aboard Hausmann) with Venezuelan bondholders at a New York legal desk the first week of April. There he exposed the decision of a hypothetical new government of Guaidó to decree a restructuring of more than 150 billion dollars. The measure clearly implies a position that favors the commercial and importing sectors and that “affects” the financial bourgeoisie and its global allies, which until now had been receiving their payments at maturity during the last 4 or 5 years.

Obviously, with name and surname, one of the most favored groups would be the Polar Companies.

On the presence of Polar in the orientation of the conspiracy, it is necessary to mention the young Roberto Patiño Guinand, who is the volunteer coordinator for humanitarian aid.

His mother is Marisa Guinand, who is the second or third executive of the food packager group (even before Mendoza), is a graduate of Harvard Kennedy School and runs a program of canteens for children in popular areas of Caracas. It has a powerful international projection, with visits from European ambassadors to the areas where it operates and accompanied Borges on a European tour in 2017 during which he had careful coverage by press agencies.

One key fact to confirm that “Operation Guaidó” is corporate is precisely the absence of an alliance of parties. Only some leaders of Popular Will appear but it is not even possible to be sure that they are all there. But the ones that do not lack are the business advisors of Polar, who like the “special attorney”, José Ignacio Hernández, have assumed positions of power.