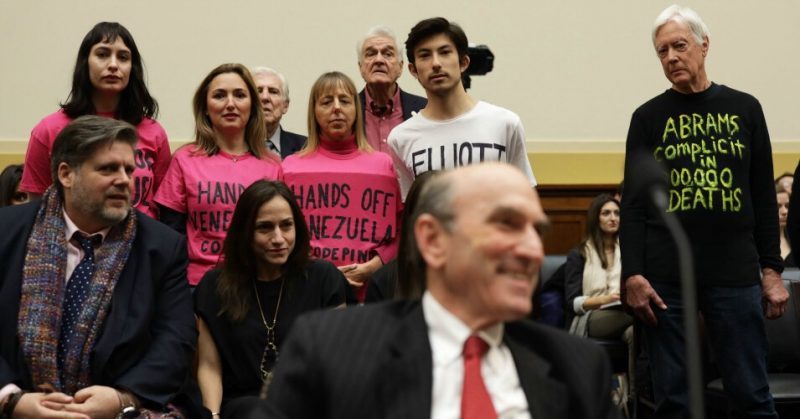 Activists of the American movement CodePink protested this Wednesday during a hearing of Elliott Abrams, special envoy of the United States for Venezuela, who appeared before the House Foreign Affairs Committee of the Congress of the United States. There they displayed a banner with the message “Elliott Abrams: Hands off Venezuela ” and called “Do not listen to this war criminal!”, Protesting against his actions to intervene in Venezuela and his dark role on the civil war in Nicaragua in the 80s. Two of the activists were arrested.

The activists were evicted from the room where the committee met, and then they were arrested. “Venezuela needs negotiations, not a coup or a military intervention,” said CodePink’s national co-director, Ariel Gold, the first to be arrested, while denouncing the US intervention in the Latin American country. “Do not let Abrams lead us down a war path!” she exclaimed.

Abrams, a neoconservative known as “Undersecretary of Dirty Wars” for his work in the governments of Ronald Reagan and George W. Bush, was selected as a special envoy to Venezuela by the Donald Trump administration after his participation in secret meetings with military who tried to overthrow President Nicolás Maduro. The Trump administration officially recognized Juan Guaidó as “interim president” on January 23, after he proclaimed himself in a public square .

While getting arrested, @ArielElyseGold breaks down why we do not support the Trump/Bolton/Abrams-orchestrated coup in Venezuela, and why Elliot Abrams should not be listened to! #HandsOffVenezuelahttps://t.co/EkEbrUOTVk pic.twitter.com/Ra6royRdpV

“Establishing a parallel government led by Juan Guaidó is illegal, irresponsible and puts Venezuela on the road to civil war,” said CodePink activist Caroline Debnam , who was also arrested, in a statement. “Instead of exacerbating tensions, the US must support the efforts of Mexico, Venezuela and the Vatican to mediate the crisis. ” With hands cuffed by the Capitol Police, Debnam said other nations offered to help facilitate the negotiations and emphasized that “this is what we should support, not a coup d’état, not the possibility of military intervention.” Abrams, Gold added, “is a war criminal and should not testify before Congress.” Kei Pritsker, another CodePink activist present at the Capitol on Wednesday, agreed: “Look at the history of Elliott Abrams in Central America and the Middle East, creating wars and chaos on behalf of US corporations. He must be tried for war crimes. He should not testify in the United States Congress.” Since then, and despite protests by anti-war activists, members of Congress and more than 70 academics and experts, the US government has strongly supported Juan Guaidó, imposed sanctions on the state oil company PDVSA and has repeatedly threatened military actions.

It’s almost like war criminals are terrified of peace activists. To Abrams, Bolton, Trump, & all of the hawks in DC, we will not back down. You are threats to the world community & you deserve to be exposed! #HandsOffVenezuela #NoAlGolpeEnVenezuela #Paz https://t.co/EkEbrUOTVk pic.twitter.com/im0VuIWtNe

The activists of the organization have also protested against other members of the Trump administration for actively working to overthrow the Maduro government. Last month, they interrupted a speech by Secretary of State Mike Pompeo during a meeting of the Organization of American States (OAS). Last week, CodePink protested in front of the home of National Security Advisor John Bolton, another remnant of past neoconservative administrations, who recently suggested that if Maduro did not quit soon, he could be locked up in a US military prison. in Guantánamo, Cuba.

Venezuela’s chancellor, Jorge Arreaza, expressed his gratitude on behalf of the Venezuelan people in his Twitter account : “A new demonstration of rejection of the Trump Administration’s aggression against the people of Venezuela. Thank you American sisters and brothers, lovers of peace, for your courage and solidarity. ” Congressman Omar: Why should we believe you?

On the other hand, Democratic congresswoman Ilhan Omar rebuked Abrams during his appearance before Congress.

“Abrams, in 1991 you pleaded guilty to two counts of concealing information from Congress about the Iran-Contra case, for which you were subsequently pardoned by President George HW Bush. I do not understand why the members of this committee or the American people should believe any testimony you can give us today. ” Abrams was visibly upset by the congresswoman’s words, who also reminded Abrams of the policies of President Ronald Reagan. “Are you going to support criminal groups and genocide in Venezuela as you did in Nicaragua, El Salvador and Guatemala?” She asked, before which Abrams flatly refused to respond, saying he was being victim of “personal attacks”.

The congresswoman responded that it is not a personal attack at all, but rather relevant information considering that Trump has contemplated militarily intervening in Venezuela; It is reasonable to ask, with Abrams in a key position, how much he has learned from the cruel and illegal positions that occurred during the Reagan administration.

“The surprising thing about this video is how angry Abrams feels about being held accountable for his past actions,” says journalist Zack Beauchamp for Vox.com, recalling that in the United States there is a culture of impunity for elites: “No Banker was arrested for the financial crisis (of 2008). Neither are the creators of George W. Bush’s torture policy, nor the people responsible for the intelligence actions on Iraq’s weapons of mass destruction. Henry Kissinger, who committed or endorsed war crimes in a surprisingly large number of countries, remains a Washington celebrity. ”

It is the same case with Abrams, an important figure in the capitalist system, who “are not used to being responsible for their sins. That’s not how things are done in Washington. ”

Feature Photo: Members of the activist organization CodePink held a protest at a hearing by the US special envoy for Venezuela, Elliot Abrams, before the foreign relations committee of the House of Representatives of the US Congress on February 13. (Feature Photo: Alex Wong / Getty Images)