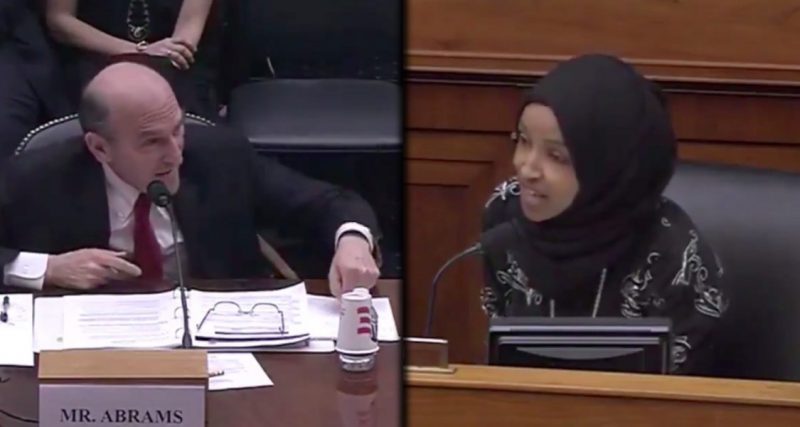 US Congress member Ilhan Omar asked Trump’s new Venezuela special envoy Elliott Abrams if he would oversee genocide and war crimes as he did in Guatemala, El Salvador, and Nicaragua.

“Would you support an armed faction within Venezuela that engages in war crimes, crimes against humanity, or genocide, if they believe they were serving US interests, as you did in Guatemala, El Salvador, and Nicaragua?” asked Omar, a progressive Democrat representing Minnesota.

In this other amazing clip from today’s House Foreign Affairs Committee hearing on Venezuela, @Ilhan grilled coup-monger Elliott Abrams over his history of lying to Congress & his overseeing of brutal massacres by far-right death squads in Central America.https://t.co/toMJZA0O22 pic.twitter.com/Cqghx50vMH

In January, President Donald Trump appointed Abrams as his special envoy for Venezuela. The Trump administration has been leading a right-wing coup attempt in the oil-rich South American nation, seeking to topple its elected leftist government. Abrams is notorious for overseeing an array of atrocities in Central America. In 2002, under then President George W. Bush, Abrams also supported a brief military coup in Venezuela. In the hearing, which took place on February 13, Omar continued grilling Abrams over his involvement in US crimes in Central America. Omar said: In 1991, you pleaded guilty to two counts of withholding information from Congress regarding your involvement in the Iran-Contra affair, for which you were later pardoned by President George H. W. Bush. I fail to understand why members of this committee, or the American people, should find any testimony that you give today to be truthful. … On February 8, 1982, you testified before the Senate Foreign Relations Committee about US policy in El Salvador. In that hearing, you dismissed as ‘communist propaganda’ a report about the massacre of El Mozote, in which more than 800 civilians, including children as young as 2 years old, were brutally murdered by US-trained troops. During that massacre, some of those troops bragged about raping 12-year-old girls before they killed them. You later said that the US policy in El Salvador was a ‘fabulous achievement.’ Yes or no, do you still think so? Bold new foreign policy voice in Congress Omar, a freshman in the US Congress, has shown leadership in challenging the bipartisan foreign policy consensus. This February, she was smeared as “anti-Semitic” for calling attention to the influence of the Israel lobby and right-wing Israel-backed groups in Washington. Abrams is a longtime ally of the Israel lobby, and was directly involved in the failed coup attempt against the elected Hamas government of the Gaza Strip in 2007. Elliott Abrams’ crimes in Central America In her comments during the Foreign Affairs Committee hearing, Ilhan Omar referred to the role Elliott Abrams played in backing the military junta in Guatemala in the 1980s. Under the sponsorship of the United States, Guatemalan dictator Efraín Ríos Montt carried out a campaign of genocide against the local Indigenous community, in a bloody attempt to crush any shred of communist and socialist resistance. Abrams lobbied for the US government to send more and more weapons to Ríos Montt’s regime. He attacked human rights activists and actively downplayed US-backed atrocities. Abrams even insisted that the Guatemalan junta “brought considerable progress” on human rights, progress that needed “to be rewarded and encouraged.” Abrams was also deeply implicated in the notorious Iran-Contra scandal, in which the United States used the money made in secret arms sales to Iran in order to fund far-right death squads in Nicaragua, known as the Contras. In the 1980s, Abrams even smuggled weapons to the Contras by hiding them in supposed “humanitarian aid” shipments.

With announcement from John Bolton that US military will help deliver humanitarian aid to Guaido & Venezuela opposition, worth recalling this history: in 1980s, CIA arranged to deliver military equipment to Contra rebels in Nicaragua on planes designated for “humanitarian aid.” pic.twitter.com/8Q6a49507D