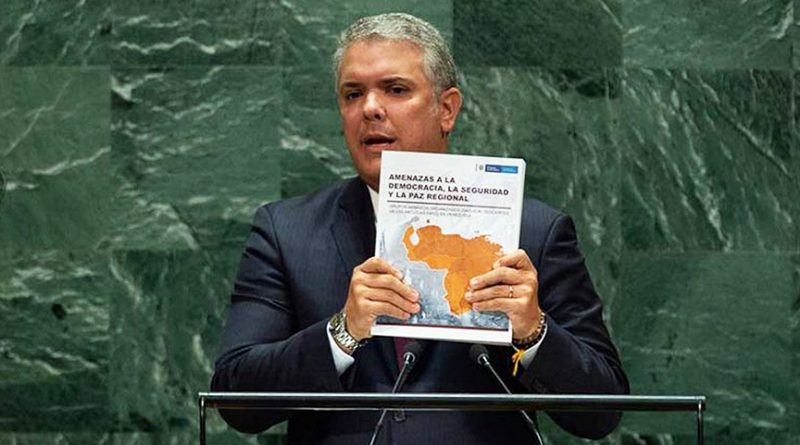 News agencies AFP and El Colombiano have confirmed that they had taken at least four of the pictures included in the dossier delivered by Colombian President Ivan Duque to the Secretary General of the United Nations, Antonio Guterres last Thursday during the 74th U.N. Assembly General.

According to the President, the photographs were to be key evidence to prove the relationship between Colombian illegal groups and the Venezuelan Government headed by Nicolas Maduro, reported the news website Semana.

However, a press release by AFP disclosed that a representative of the Colombian Defense Ministry contacted them to apologize for using pictures which do not correspond to the facts pointed out in the report.

“In a phone call with AFP last Friday, a spokesperson for the Defense Ministry apologized and acknowledged that there are at least three images from the agency in the dossier, the contents of which has not been completely made public yet,”

They detailed that one of the images had been taken in the Catatumbo region, in the Norte de Santander department; another in Choco department of Colombia, in which a member of the National Liberation Army guerrilla (ELN) is sitting with her face covered by a scarf; and another with members of the FARC guerrilla in the Guaviare department, in the southern central region of the country. They all date back to 2018. According to the Government’s spokesperson, an explanatory document will be attached to the dossier with the false accusations handed over to the U.N.

Colombian President Ivan Duque referred to the dossier handed over to the United Nations about the alleged ties between Colombian illegal groups and the Venezuelan Government as fact was called into question when he released parts of that document, with fake images, according to statements released by the newspaper El Colombiano and AFP news agency.

In the picture commented on by Duque there can be seen a group of people wearing camouflage clothes, holding hands with children. And there is a caption that reads: “Penetration of the ELN into rural schools of Tachira state (Venezuela) for indoctrination purposes in April 2018.” The same image was published by El Colombiano in June 2015, in a news article titled “Kids are led to war with piñatas and gifts.” The newspaper revealed that the picture had been provided by the Army as the record of a situation that occurred in Cauca, Colombian territory.

In an interview last Friday, Duque commented on the issue and maintained the thesis that the image was taken Venezuelan territory. “That picture is in a page of the dossier that I posted on the social media. In that page, looking at in detail, there is a specification, and it says that the images in that page come from different sources. One of them is a foundation that has been claiming for years the presence of Colombian illegal armed groups in Venezuela. The foundation places the picture in a report on April 2018. Why is the image there? Because it is an image for context and the dossier has as pictures for context as those belonging to the Colombian Intelligence. There was a controversy because a news outlet in Colombia said they had received it in 2015. The foundation declared that the photo was from 2013 during denunciations made about the presence of the ELN in different schools in Venezuelan states.”

Nevertheless, last Friday, El Colombiano gave additional information about the issue. It released other pictures that arrived in the same package of the image in question. In one of them it can be seen the drawings made by children, at the request of the ELN, amidst the recruitment dynamics. Drawings include Colombian maps, which leads to one to believe that the children are Colombian, confirming the statements of the newspaper.

Venezuelan President Nicolas Maduro branded President Ivan Duque as an “imbecile” for handing over false information to the U.N. as evidence of alleged ties between his Government and the Colombian guerrillas.

“Porky, that imbecile… Ivan Duque, that imbecile went and presented a document and all its pictures are fake, as it should be because the guerrilla struggle is a seventy-year-old phenomenon in Colombia,” Maduro said in an event broadcast live in Venezuela.

“It’s there, Ivan Duque, where your country is at war, in your failed state with eight million displaced,” President Maduro added, accusing the Colombian President of fostering an armed conflict between the two countries for the sake of ousting him.

“Shame on you Ivan Duque,” Maduro added, describing the Colombian President as “the king of the false positive.”

Together with the United States, Colombia leads the international pressure to oust Maduro and replace him with opponent Juan Guaido, the self-proclaimed interim president of Venezuela who is recognized by about fifty nations, including Colombia.

Duque Includes Cuba is the same Package of Accusations and Lies

On Sunday the FARC party, formed after the former guerrilla organization demobilized, condemned the comments made by Duque questioning Cuba as to who they should decide to have a relationship with, the South American country or with criminals, referring to the ELN.

“The Cuban Government has been essential in helping to build peace in Colombia and the world. Thanks to the cooperation of this nation and the other guarantor and facilitating countries they made it possible to sign the Havana Agreement,” stated the Common Alternative Revolutionary Force (FARC) in a communique branding Duque’s comments as “rash and threatening.”

As a matter of fact, President Ivan Duque urged the Cuban Government to extradite leaders of the ELN, otherwise it would be clear that Havana “prefers” to have a relationship with “criminals” rather than with Bogota, reported EFE.

According to the news agency, the Colombian President responded this way to a question during a press conference in Miami after his participation at the UN about whether he would be ready to break relations with the Island if it does not proceed to extradite ten negotiators of the guerrilla group that are still in Cuba.

The Administration of former Colombian President Juan Manuel Santos had started proceedings to hold dialogs with the ELN but in Ecuadorean territory. But after three Ecuadorean journalists were murdered, Quito withdrew itself as guarantor country in the conversations and ordered that the negotiating table be established outside its territory.

This is when Cuba started its role as guarantor

Negotiations with the ELN continued when Duque took office but in an evaluation mode. Then in January of this year the President declared the process of peace talks were finished when the guerrilla group claimed to be the author of an attack carried out in a school of cadets, according to a report from RT.

After this article was filed, in a further admission of the fraud, the Colombian government dismissed the head of Intelligence and Counterintelligence General Oswaldo Peña Bermeo as the fall guy for Duque’s presentation in the UN of fake photos as being “conclusive proof” of Venezuelan President Nicolas Maduro’s support of so-called terrorist groups. Editorial.