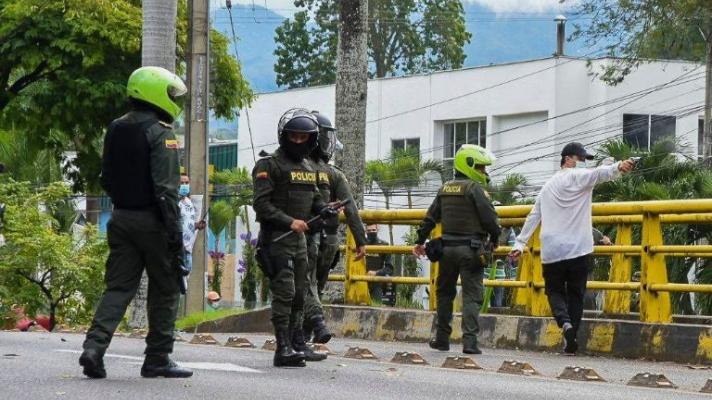 On June 16, the Colombian investigative journalism group Cuestion Publica published the report “When the Police Are Allied with Armed Men in Civilian Clothes” which consists of the reconstruction—from videos, audios and chat messages—of an incident to the south of Cali, Colombia, which reveals how the police and civilians formed an armed self-defense group.

Data, facts and authors
• On May 28, a group of civilians and police officers fired at unarmed citizens and intentionally detained peaceful protesters within the framework of the National Strike that is ongoing since April 28.

• Sources told Cuestion Publica that the representative of the chamber for Uribe’s Democratic Center party, Christian Garcés Aljure, is the most visible political face, and “has been the main promoter of all this systematic violence that has occurred.”

• Caracol Televisión and RCN, primary operators of the Colombian media cartel, were among the financiers of the electoral campaign of Garcés, who is the author of a bill that proposes making the legal carrying of weapons more flexible.

• The journalist Jose Alberto Tejada, director of Channel 2 in Cali, joined by demonstrators, broadcast live the events in Carrera 100, in Calle 16 in Ciudad Jardín, where the attack occurred.

• In the same sector, a similar confrontation took place on May 9. Armed men in civilian clothes, protected by the police, blocked the Minga del Cauca pass with trucks, and injured 12 Indigenous people, three of them critically.

• Michelle Bachelet, UN High Commissioner for Human Rights, called for respect for human rights in Cali because on May 28 alone there were 14 fatalities, 98 people injured (54 of them with firearms) and more than 30 young people arrested.

Democratic Center leads the offensive
• On May 8, the day before the attack on the Minga, some residents met with the police of the sector at 4 p.m. Subject: “Professional and Successful Management, Benefits, Commitments of the National Police, Commitments of the Community.” The results of that meeting are now known, summarized in the Cuestion Publica article.

• Through a WhatsApp chat and other sources, it was learned that on May 28 at 8 a.m. there was a meeting between the police and members of the Communal Action Boards of Commune 22, attended by Garcés and Colonel Luis Ernesto Gómez Luna, deputy commander of the Cali Metropolitan Police. Subject: “Security for Today.”

• Among the conclusions of said meeting, a joint action was agreed upon between military personnel (as ordered by Uribe and Duque) and the Cali Police. WhatsApp audios show the call and how the police authorized the shots fired and abductions by civilians.

Why it is important
Uribe, who from his Twitter account said that same May 28: “SOS Ciudad Jardín, Cali” and called for the “total deployment of the Military and Police Force and militarization of the Colombian territory in areas where there is serious threat against the security of citizens,” has spearheaded a program of war that has combined the repressive and genocidal action of the military forces with paramilitary groups.

Duque’s government has brought to the cities what was already experienced in rural and suburban sectors for many years. The same report details that Duque traveled to Cali on May 28, and met at night with residents of Ciudad Jardín, including the people who took up arms that afternoon.

The national strike and demonstrations continue and the dialogue—to avoid granting concessions to the people—remains on hold.

Featured image: Civilians shoot at protesters next to the Colombian Police. (Photo: File).