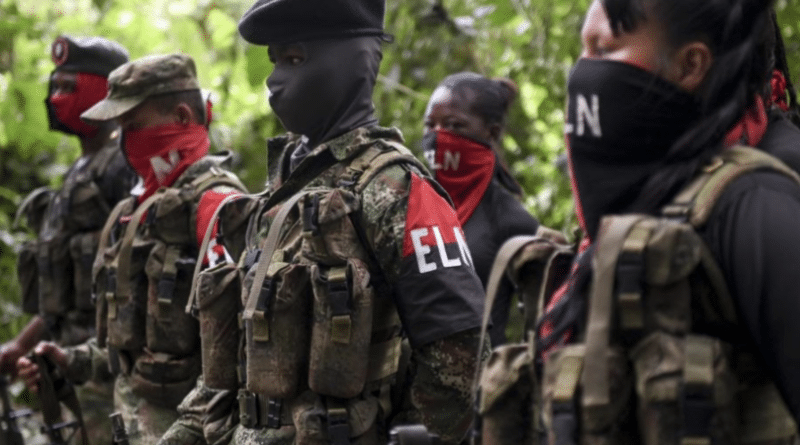 February 11, 2021.-  A recent news piece written by the Daily Mail attributes clandestine cocaine laboratories found by the DEA and Colombian security forces to the National Liberation Army, or ELN. The two labs were discovered in the department of Nariño, located on the Pacific coast. In the Pacific region, drug cartels and paramilitaries operate openly and inflict great amounts of violence upon the civilian population.

At face value, this information can make sense if one takes the mainstream narrative — that Colombian guerrilla groups are merely drug cartels — for granted. This idea is based on a common misunderstanding of the history and nature of these groups. The accusation of narcotrafficking is one of the most common allegations against the Revolutionary Armed Forces of Colombia, or FARC, that has been disproven after their demobilization. FARC’s connections to the drug trade were at most limited to providing security to coca growers and taxing the wealthy based on income within their region of operation, with some of these people having links to narcotrafficking.

On a structural level, FARC utilized these “revolutionary taxes” to keep their operations going, but never exported cocaine themselves or profited off of the wealth that comes from the drug trade. As such, they didn’t exhibit the main characteristics of a drug cartel. These strategies are also utilized by the ELN, who oppose the drug trade on political grounds but utilize a similar taxation system to fund their operations.

This report comes at a time when Colombian news giants, such as Semana, are claiming that the computer archives of recently killed ELN commander Uriel contained evidence that the ex-president of Ecuador, Rafael Correa, has links to the guerrilla group. In addition to rumors about guerillas and the drug trade, another longstanding campaign of misinformation seeks to push the idea that various socialist-leaning or progressive leaders in Latin America are narcos or have direct ties to supposed narco groups. Correa has recently been pinned as one of these people.

This is very specifically timed considering that the Ecuadorian elections were held February 7th, with economist and popular socialist candidate Andrés Arauz promising to uphold many aspects of Correa’s legacy. For this type of news to come out so close to elections clearly shows an interest in curbing the popularity of socialism in Ecuador.

The sources for both of these claims come directly from Colombian security forces and the DEA. At first glance, these appear to be credible, but there are many reasons to be suspicious of the integrity of these sources.

Recently declassified documents from the US State Department show that Uribe, Colombia’s ex-president, received money from Pablo Escobar and had his campaigns directly funded by the Medellin Cartel. Declassified military intelligence reports from the NSA also identified Uribe as a principal figure in narcotrafficking in Colombia back in 2004. During his presidency, cocaine production and exports increased and money was continually poured into the military budget thanks to billions of dollars in US aid.

Colombia and the West have always attempted to scapegoat communist guerillas for narcotrafficking. Before the peace agreement of 2016, the Colombian government released reports attributing 60% of cocaine exports to FARC. However, if you look at this period of time and even at the present, you will find that banks and transnational corporations often dominate the market and profit the most off of narcotrafficking. The U.S. has been able to fund their numerous counterinsurgency programs throughout Colombia, and the rest of Latin America, through narcotrafficking. These counterinsurgency programs are directly responsible for much of the brutal violence witnessed at the hands of paramilitaries throughout Colombia. Many of Colombia’s highest-ranked military personnel, police officers and politicians, including Uribe, have known links to narcotrafficking.

This recent “discovery” of the ELN’s links to narcotrafficking is likely just an attempt to shift focus away from those who really dominate the drug trade: transnational corporations and high ranking officials throughout Colombia and abroad. By externalizing their own links to narco-activity by casting blame on left-wing groups, the right-wing US puppet government of Colombia legitimizes its ever-growing militarization, all in the name of fighting “narcotrafficking communists”.