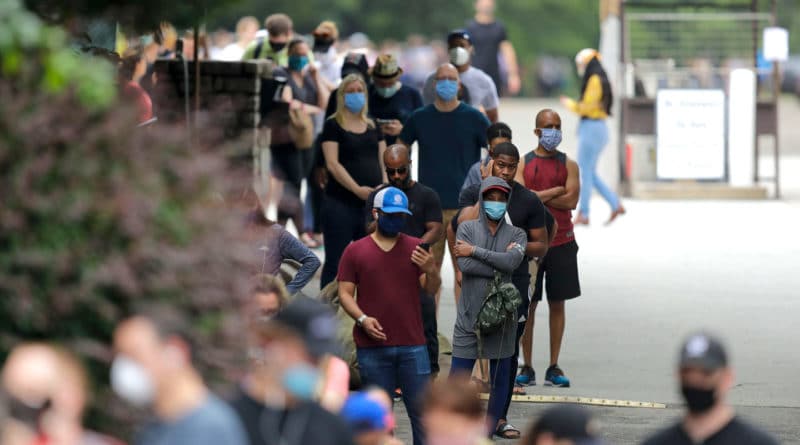 According to reports, Georgia election workers and voters are experiencing major issues in Atlanta this Tuesday during the state’s primaries, mainly due to problematic election machines, forcing people to stand in long lines and cast provisional ballots.

According to The Nation, Georgia is now ground zero for voter suppression. The state’s largest newspaper summed up the crisis on the morning after Tuesday’s primary election in the state descended into chaos: “‘Complete Meltdown.’” Kristen Clarke, the president and executive director of the Lawyers’ Committee for Civil Rights Under Law, ticked off the evidence of “a system that is failing” voters: “malfunctioning machines, long lines, polling sites that opened late and insufficient numbers of back up paper ballots in Georgia.”

LaTosha Brown, the cofounder of the group Black Voters Matter, tweeted early Wednesday morning: “Georgia’s Elections were a HOT MESS! Last voter walked out at 12:37am in Union City.” Brown and her group provided support for voters who waited five or more hours to cast ballots in predominantly African American precincts, while noting that in suburban precincts there were fewer lines. Referring to the stark disparity, she said, “I come over to this [suburban polling place], and white folks are strolling in. On my side of town, we brought stadium chairs.”

In a post to Twitter, Atlanta mayor Keisha Lance Bottoms said that people have been waiting in line since 7am this morning.

Voters lined up at Piedmont Park in Atlanta earlier. 😳🗳 pic.twitter.com/lnGiG7iCR8

Some voters have been captured on video airing their frustrations. In one video, a woman who says she once served in the Obama administration stands outside her car and says the situation has her “terrified.”

“This is wrong!” the woman yells. “This is America! Please God, help us. … This a crisis in our world to make us not exercise our right to vote.”

BREAKING NEWS: Voters outraged because they can’t vote. @cbs46
Voting machines are down & systems aren’t working all over #Atlanta
Some people have left the polls because the line has NOT moved since 6 A.M. pic.twitter.com/QfJ8fxz5TQ

Another woman told journalist Greg Bluestein that the situation is “ridiculous.”

“In the United States of America, this time, people can vote, people are killing each other, they can’t get along … What is going on?” the woman says.

Here’s a glimpse of the scene at Cross Keys, where technical issues have ground voting to a standstill and officials have run out of provisional ballots. #gapol pic.twitter.com/XtezH1Qyrm

One woman took to Twitter saying that after standing in line since 6:45am, she was finally able to vote over two hours later.

UPDATE – they apparently have run out of provisional ballots as they only had 30 total and they have no regular paper ballots! Voting machines are still not working at Precinct WJ
CROSS KEYS HIGH SCHOOL
1626 N DRUID HILLS RD, NE
ATLANTA, GA, 30319#gapol #gavote

Author Ron Clark tweeted that within 50 minutes, only 4 people voted out of a line that contained hundreds.

Here trying to vote in Central Park in Atlanta. They said all machines are broken and not working and that they reported it before today but no one responded. Hundreds in this line and in 50 minutes only 4 people have voted. They are doing by hand. @staceyabrams

According to The New York Times, more than a million Georgia voters had already cast their ballots before Tuesday after Secretary of State Brad Raffensperger sent absentee ballot applications to all active voters.

“But those who had voted in person before Tuesday at early-voting sites had already reported long waits — in some cases up to seven hours. New rules for social distancing and disinfecting voting machines had caused many of those delays,” the Times reports.

According to the Atlanta Journal-Constitution, State Rep. William Boddie (D) says Fulton County is in a “complete meltdown.”

“My phone hasn’t stopped ringing. We’re having issues throughout the county,” he said. “Did they not know this was going to be a voting day for months? Fulton County’s Board of Elections can’t be let off the hook this time. It’s inexcusable.”