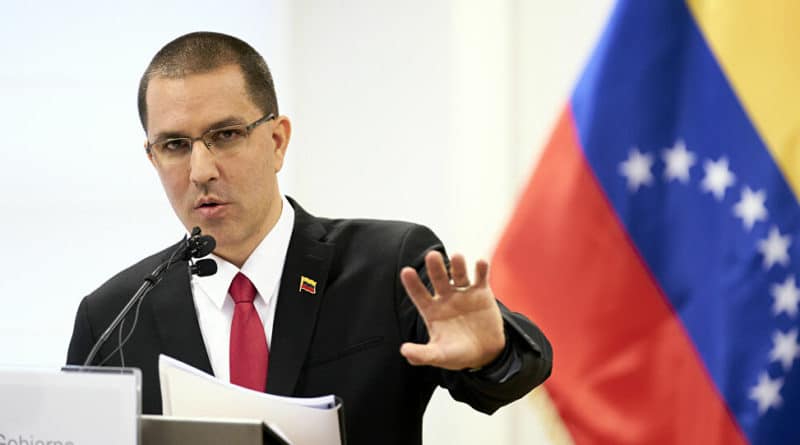 This Wednesday, Venezuelan Foreign Minister Jorge Arreaza denounced the US government and Donald Trump for openly and blatantly defending corruption to the degree of property damage against the Venezuelan State.

It was in response to a tweet from US chief diplomat, Mike Pompeo, stating: “let’s don’t loose sight of how Maduro’s regime hurts US citizens. We call again on the regime, holding 6 US oil executives for more than two years and a half without due trial, to liberate each one of them.”

The Venezuelan diplomat emphasized that “beyond political differences, corruption cannot be defended so openly and blatantly,” he posted on his twitter account. Previously he wrote: “US regime pleas for 6 Venezuelans, confessed and found guulty by a court of law for inflicting grave damage to strategic assets belonging to Venezuela and to the Venezuelan people.”

Upon the executives being apprehended, the Venezuelan attorney general, Tarek Saab, explained that in July 2017 the former directors signed a multi-million dollar agreement to refinance Citgo’s debt under unfavorable conditions for Venezuela and that they compromised company assets by placing Citgo as collateral without coordination and approval from Caracas.

The six executives, all Venezuelans but some with dual US citizenship, were detained at the headquarters of the military counterintelligence directorate in Caracas. High ranked US officials have asked Venezuela to release José Luis Zambrano, Alirio Zambrano, Jorge Toledo, Tomeu Vadell, Gustavo Cárdenas and José Pereira, arguing medical reasons. They are currently enjoying house for jail benefits in Venezuela.

Some analysts have questioned the US regime’s insistence on the liberation of these executives, arguing that having the criminals in Washington insisting regularly on the release of these Venezuelans cannot be interpreted differently than as clear evidence of their participation and connection with plans against Venezuela and its assets led by the US regime.