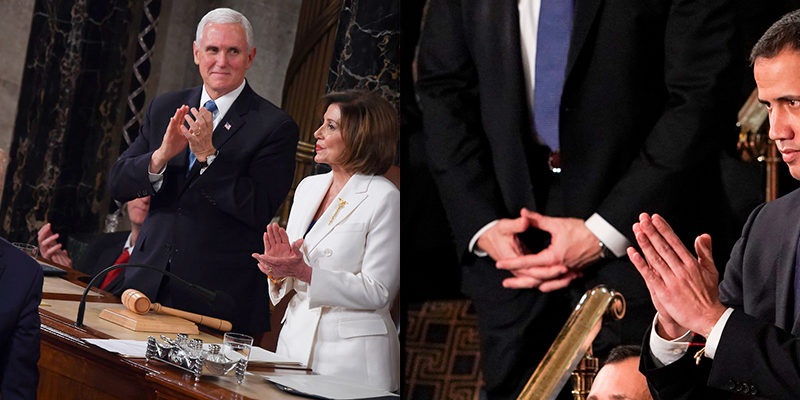 During the State of the Union Address, many Democrats in Congress, including Speaker Pelosi, gave a standing ovation to Juan Guaidó, the man hand-picked by the Trump administration to declare himself “interim president” of Venezuela. Why are the Democrats cheering coup attempts that could destabilize the entire region of Latin America and sanctions that have killed least 40,000 people?

Fill out this form to send a message to the Dems asking them to tweet or issue statements denouncing the coup and asking for dialogue between all the parties. We will track who takes the action and thank them. If you are not located in the US, Canada, or Australia, sign below petition instead:

During the State of the Union Address, many Democrats in Congress, including Speaker Pelosi, gave a standing ovation to Juan Guaidó, the man hand-picked by the Trump administration to declare himself “interim president” of Venezuela. It is outrageous that Democrats would give a standing ovation to this failed coup leader who has further destabilized an already unstable country. I urge you to issue a statement or tweet condemning Juan Guaidó and the Trump administration’s Venezuela policy. Please also speak to Pelosi about her cheering such a dangerous foreign policy debacle.

Over the past year, Guaidó has attempted a military insurrection, been photographed with members of a Colombian drug cartel, lost his bid to be reelected as head of the National Assembly and created a parallel parliament as a result. Guaidó even said he could call for U.S. marines to invade the country (as if he had the power to do this!) and has asked for more and more sanctions. According to the Center for Economic and Policy Research, sanctions on Venezuela have claimed at least 40,000 lives. Furthermore, Guaidó’s team in Colombia has been credibly accused of embezzling humanitarian aid funds.

Guaidó has enjoyed the full support of the Trump administration in his attempted coup. Why are Democrats not challenging this failed policy and pushing for constructive dialogue as an alternative? Democrats must stand up to regime change. We learned from Afghanistan, Iraq, and Libya, among others, that regime change leads to chaos, death, and suffering.

A statement or tweet condemning Juan Guaidó’s coup attempt and the Trump administration’s Venezuela policy would go a long way towards demonstrating the United States can play a constructive role in helping Venezuela resolve its political and economic crises.

Please issue a statement or tweet and speak with Pelosi.