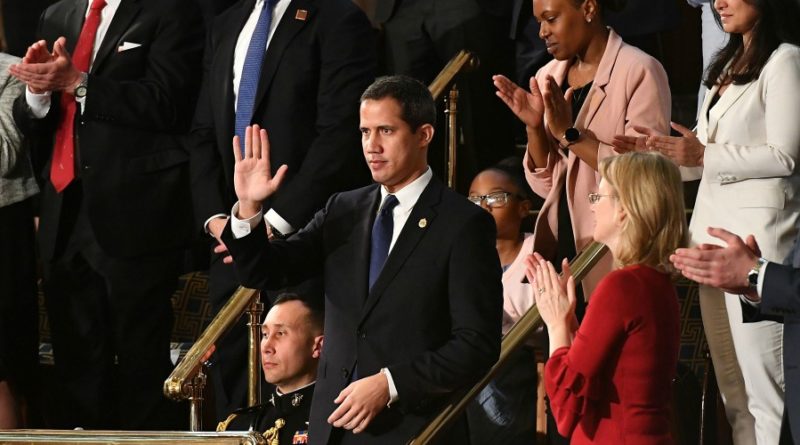 “Intervening in Venezuela’s internal politics is the one thing that is bipartisan! How sad,” said CodePink co-founder Medea Benjamin.

In a moment observers described as a telling display of the bipartisan support for regime change that pervades Washington, D.C., congressional Democrats applauded along with their Republican colleagues after President Donald Trump used his State of the Union address Tuesday night to praise Venezuelan opposition leader Juan Guaidó, who headed a failed U.S-backed coup against his country’s elected president last year.

Trump hailed Guaidó—who was in attendance for the address—as the “true and legitimate president of Venezuela,” a line that was met with a raucous standing ovation from members of both political parties, including House Speaker Nancy Pelosi (D-Calif.), the top Democrat in Congress.

As NPR reported, “Guaidó received an extended bipartisan standing ovation. It was one of the few times that House Speaker Nancy Pelosi and Democrats stood to applaud during Trump’s speech.”

I don’t give a shit that Nancy Pelosi ripped up Trump’s speech, her theatrics mean nothing. She stood up and applauded Trump’s fake regime change president of Venezuela, Juan Guaido. Both party’s leaders are rotten to the core pic.twitter.com/ggNegSwhaX

Keane Bhatt, policy adviser to Sen. Bernie Sanders (I-Vt.), tweeted in response to the show of unity that “there is no better distillation of Washington, D.C. than a State of the Union in which Nancy Pelosi—having just led the impeachment of Donald ‘All Roads Lead to Putin’ Trump—twice joins in a rousing standing ovation of Juan Guaidó, Trump’s appointed ‘president’ of Venezuela.”

CodePink co-founder Medea Benjamin reacted with dismay to the bipartisan standing ovation for Guaidó, whose coup attempt against Venezuelan President Nicolás Maduro quickly collapsed last year despite support from the U.S. and other nations.

“The Democrats, including Pelosi, just got up to applaud the self-proclaimed ‘president’ of Venezuela Juan Guaidó,” tweeted Benjamin. “Intervening in Venezuela’s internal politics is the one thing that is bipartisan! How sad.”

Featured image: Venezuelan opposition leader Juan Guaido waves as he is acknowledged by U.S. President Donald Trump during his the State of the Union address at the U.S. Capitol in Washington, D.C. on February 4, 2020. (Photo: Mandel Ngan/AFP via Getty Images)