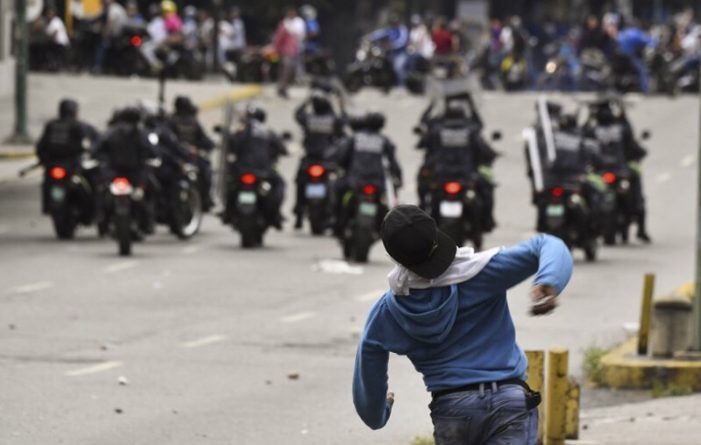 State security agencies said that three leaders of criminal gangs were in charge of the violence that took place in different areas of Caracas between January 23 and 25 of this year. According to information from the newspaper Últimas Noticias (UN), the alleged “negative leaders” were identified as Wilexis Alexander Acevedo Monasteries (The Wilexis), Gregory Rubén Rangel González (El Pran) and Leonardo José Polanco Angulo (Loco Leo), who created a wave of violence in Petare, San Martín and El Valle.

The criminals, who are linked to the sale of drugs, extortion, homicide and theft of vehicles, allegedly promoted the events that resulted in looting, aggression and property damage.

On the night of January 23, alias Wilexis armed barricades around the Palo Verde station of the Caracas Metro and the Petare redoma, where José Calcuarian (20), Richard Montaña, Yoendry Enrique Fernández (27) and Jhonny Marcano (28), noted Últimas Noticias.

The article also mentions that looting, blocking of roads, and burning of wood planks in El Valle parish were carried out by order of Leonardo José Polanco Angulo, alias “Loco Leo”, who proceeded with his group, “La banda de 70s “, into the sectors of Los Jardines, San Antonio, San Andrés and Las Malvinas.

The newspaper reported that the actions of Crazy Leo and his group began, according to witnesses, starting at 7 pm after fireworks and gunfire were heard.

It was also reported that in El Guarataro, San Martin and Los Eucaliptos the person responsible for the disturbances allegedly was “Gregory Rubén Rangel González, alias El Pran, member of the Macua gang, who controls the sale of drugs in the aforementioned sectors of Caracas.”

San Martín was one of the areas where several material losses were recorded, including the burning of private vehicles and public transportation, as well as the attack on the Caracas Metro, the looting of liquor stores and other commercial establishments. According to the information disseminated by the newspaper, during the conflicts of last month, Esteban Salinas (24) was killed by one of the leaders of the Macua gang.

The authorities have not yet managed to capture the alleged perpetrators.

Ultimas Noticias also released part of the record of the three mafia bosses who took some areas of the city “head on”, just at a time when the political situation affected the country, and in which the image of “the guarimbas” returned to the streets.

In this regard, it was mentioned that, among other crimes, “El Pran has 11 warrants issued from different criminal courts in Caracas for homicides, drug trafficking and extortion.”

Meanwhile, “the Wilexis” allegedly participated in robberies, armed robberies, homicides (with more than six murders between 2013 and 2018).

As for Leonardo José Polanco Angulo, UN stressed that “four warrants for homicide and sale of drugs are attributed to him, according to files that lie in the Palace of Justice in Caracas, according to judicial sources.” The broad record of the “crazy Leo”

The acts of violence that took place on the nights of the 23 and 24 of last month in El Valle, brought back to light the name of Leonardo José Polanco Angulo, alias “Loco Leo”, to whom the authorities attribute the leadership of these disturbances, in addition to having an extensive series of crimes in his file.

“Crazy Leo” is the current leader of “the gang of 70”, and one of the most wanted criminals by the authorities, for being linked to a large number of crimes, including an attack on security forces.

One of the most recent events, in which his participation was verified, was in November of last year when a motorcyclist allegedly belonging to the “gang of 70” threw a grenade at one of the control points of the Bolivarian National Police (PNB) on the Intercomunal Avenue of El Valle.

In that event one of the officers lost his left hand and subsequently died, and three officers and a passer-by were also injured.

Polanco assumed the leadership of the gang of 70 after the death in 2016, in a confrontation with the Cicpc, of Freddy Silva, alias “Cabeza de Bruja”, the first head of said criminal organization.