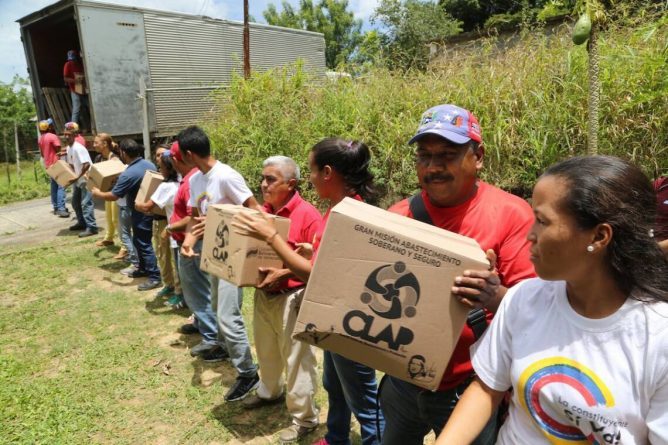 During the broadcast of the television show “Cultivando Patria” last weekend, the Minister of People’s Power for Productive Agriculture and Land, Wilmar Castro Soteldo, reported on 5 strategies that the economic and food sector is implementing in order to counterattack the war and the blockade that the United States has implemented against Venezuela.

“The new beginning of the Clap system”, as President Nicolás Maduro calls it, is “a program that is now reconfigured with the creation, expansion and strengthening of the Food General Staff in each of the regions of the country.”

The plan is divided into 5 main strategic lines, which are:

• The Clap will arrive in a much more direct way, with greater follow-up and control, to the homes of Venezuela, making verifiable the number of families and the volume of people served by this social care program of the National Government. In this regard, Vice President Delcy Rodríguez highlighted last Sunday that the direct delivery of the Clap will be monitored with the QR code of the Carnet de la Patria, to certify the delivery of the food combos.

• The fairs of the sovereign field (popular markets) will be increased in number, where items such as vegetables, tubers, roots, fruit and animal protein will be distributed. “The intention or goal of this second line of action is to attend each of the parishes in the most populous sectors”, said the president.

• Municipal markets will be addressed , activating the 335 municipalities of the country so that in each one of the zones of the states food, textiles and non-perishable products are produced, also demanded by a large volume of the population.

• The Clap Stores (old Bicentennial Supplies ) will be reactivated or new establishments will be created. “There is a first goal of 27 Clap Stores,” said the Minister, and called for activating the former Bicentennial Supermarkets in alliance with local or private sectors, and to meet the whole range of needs that our people in some way demand.

• Work will be carried out with the distribution networks linked to the chain of the National Association of Supermarkets and Supplies (ANSA), as well as with merchants from other countries that have large commercial stores at the national level, and wineries that are distributed throughout the length and width of our neighborhoods and communities that are served by these actors who act as wholesalers.