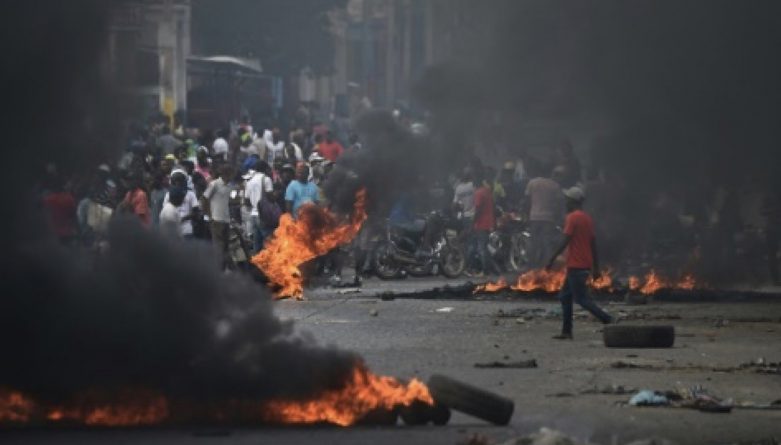 Jovenel Moïse, the corrupt US backed president of Haiti, is faced with a rapidly spreading insurrection. The population had resoundingly rejected his claim to authority by repudiating the voting process, rising up during the elections, and now fighting for the president’s immediate removal.

The people in Haiti have been in near constant revolt since colonization and slavery. Resisting the French, the Americans, and the Duvalier dictatorship, Haitians have resisted all forms of subjugation, colonial and indigenous. After the US kidnapping of popular president, Aristide, the Haitian political system has been generally unpopular and, ultimately, a client of the US government.

Moïse was “elected” under the shadow of rebellion. Each step he took closer to political power was met with widespread popular disdain. His party, the right wing Tèt Kale (PHTK), was renowned for its corruption and incompetence. Moïse declared, “I alone have the solution for the question of corruption,” while he assumed power under an indictment for money laundering. He put several new PHTK politicians in positions of power while they were suspected of financial transgressions.

Last summer, the government implemented an IMF austerity program that raised the price of gasoline, diesel, and kerosine to almost 50%. This draconian attack was met with fierce resistance.

As the resistance tapered off the scope of the capitalist attack on the poor became clear. The Venezuelan government established a fund called PetroCaribe that offered revenue for Haiti. The program was promoted as a program of “economic solidarity,” valued at $3.8 billion dollars. The fund was supposed to help restore the country after the hurricane, and generally increase the standard of living for the poor. This money, in actuality, was squandered and embezzled. The resistance to the state immediately intensified and has never subsided. What began as a movement against state corruption has now morphed into resistance against the president and his party. Militants are not articulating piecemeal demands but are calling for the overthrow of the ruling party.

On February 9th revolutionaries blocked the roads to the president’s home and stoned his property. Thousands of people poured into Port-au-Prince demanding the overthrow of the regime, and the state has begun killing protesters.

Anarchists, revolutionaries, and internationalists have a responsibility. When the poor is under assault, fighting to regain dignity, and overthrow right wing forces revolutionaries must move in tandem. As the US state is impulsively trying to organize a coup, and destroy the communal/revolutionary process in Venezuela it is also propping up a corrupt, far right government in Haiti that is directly looting the oil revenue that was gifted from Venezuela.

Revolutionaries have an opportunity to increase international connections, participate in anti-colonial, anti-imperialist struggle, and combat the fascist momentum in the Americas.

Revolutionary action against Haitian state institutions is of utmost importance now, and small acts of solidarity can have a huge impact. The time to act is now!