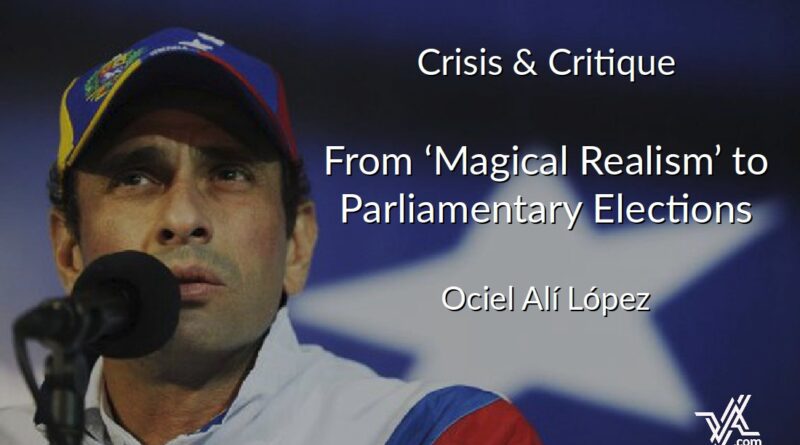 Elliott Abrams, White House Special Envoy for Venezuela, recently referred to [far right politician] Maria Corina Machado’s foreign intervention appeals as “unwise” and “magical realism.” In so doing he made the US military intervention scenario less likely, at least for now, and he unwillingly left the electoral route as the only politically viable option. Meanwhile, Abrams himself has been pushing to escalate the blockade which has now generated a critical fuel shortage situation, with all its implications in terms of food supply and healthcare.

President Maduro’s August 31 presidential pardon to opposition figures changed the perspectives concerning elections, not just for Venezuelan people, but also for the media as well as governments and other organizations around the world. This could represent a boost for the December 6 National Assembly elections.

With former two-time presidential candidate Henrique Capriles calling on people to vote, a new electoral scenario opened up, both for those who backed a violent solution and those who did not. It is an opportunity for the entire opposition to abandon the insurrectional, pro-intervention route it was dragged to by some leaders and try its luck again with the electoral route that generated overwhelming victories in the past. The calendar is already set: legislative elections in 2020, gubernatorial in 2021 and, if conditions are met, a recall referendum in 2022 as prescribed by the Constitution. Maduro mentioned this option weeks ago in an attempt to boost opposition participation.

This path requires a heavyweight outside observer, and the government has invited the European Union and the United Nations to play the role. The former, which recognized Juan Guaidó’s “interim presidency,” has refused to take part arguing that “there is not enough time.” With this stance it sets a position in support of postponing elections, but Maduro has ruled it out arguing that the Constitution demands that elections be held in 2020 and the new National Assembly take office on January 5, 2021.

RELATED CONTENT: Venezuela: The 2016-2020 National Assembly – Part of the Plan

It is hard to understand why European governments continue backing the violent solution that has failed time and again. The Guaido bandwagon, which they jumped on automatically, is going nowhere. The opposition is coming off the disastrous Operation Gedeon, when a paramilitary incursion was defeated. On April 30, 2019, a group of soldiers tried to break the chain of command and that was not successful either. The Lima Group, where the possibilities of a military intervention, or supporting a US invasion, were discussed, is dormant. US officials pay no mind to Venezuela, except to impose sanctions.

Guaidó is a sham who can only wait for the US election results to see if something can get him out of his slump. Even Trump was forced to recognize his weakness, months after hosting him with pomp and circumstance at his 2020 State of the Union address. Nevertheless, with elections on the horizon and Florida up for grabs, Trump needs at least the appearance that ousting Maduro remains one of his priorities.

Now, with an electoral solution pushed by sectors of the very opposition, the “self-proclaimed” one becomes more dangerous, because his political survival depends on his ability to weaken and sabotage the electoral process. Guaidó has two enemies. His goal is ousting Maduro, but if Capriles rises that will be his political death. Capriles is thus his more immediate enemy. Therefore the radical opposition can go for an active abstention campaign to sabotage Capriles’ stronger areas in an attempt to deflate him electorally. This hypothetical sabotage, similar to the plan followed for the 2017 National Constituent Assembly elections, would amount to handing complete political hegemony to the government.

With foreign intervention out of the question (at least for now), the radical sectors now look to bring the confrontation back to the streets. But this is a path that was hardly successful even when their mobilization capacity was at its peak. This has gradually eroded and is now a tremendous weakness. So we know beforehand that this option can annoy people but will have no political effects other than solidifying Chavismo, which is always what happens.

The international media enthusiastically and naively backed Guaidó for months, and now they realize that they are also living in a world of “magical realism,” with the opposition split, and have started to pay attention to elections once more. At the end of the day, how can an international actor back a military invasion when the church, businessmen and now prominent opposition leaders back a peaceful, electoral solution?

The clock is ticking for the “civilized” world to decide whether it wants a “civilized” solution or a violent one like we saw in Libya or Iraq.

What’s going on with the opposition?

The concerns about the insurrectional option were pushed by the Venezuelan church. On August 11, the Venezuelan Episcopal Conference, historically one of the most conservative and anti-Chavista sectors, published a statement criticizing the opposition for not having a clearer and more effective strategy. And, between the lines, it left open the possibility of endorsing elections: “in itself, abstention will only grow the political-social fracture and hopelessness about the future.”

The statement caused a rift within the opposition. First of all because it came from someone who could never be accused of collaborating with the government. Nevertheless, plenty of opposition analysts and influencers placed the church leadership on the edge of “surrendering.”

A July poll by the Andrés Bello Catholic University (UCAB), an opposition-aligned institution, had 58.9% of those polled saying they were willing to vote, compared to 29.5% who said they would not participate.

This means that if a significant part of opposition voters showed up to the polls, the plethora of opposition parties could be in line to win a significant amount of seats. If they managed to make common cause they could challenge the PSUV’s (expected) majority.

A political maneuver like this would mean the emergence of a new opposition which, even though subjected to pressure from the government and radical opposition sectors, would have the chance to create a new political landscape in Venezuela.

Táchira Governor Laidy Gómez, a member of the opposition party Democratic Action, has decided to take part in the elections, for example. It is quite likely that all of the opposition figures in elected posts end up running or at least endorsing candidates or parties. Not doing so would mean losing their grip on governorships and city halls.

Jorge Roig, former president of the business association Fedecamaras who retains a lot of influence, said he was waiting to see Capriles’ proposal, admitting that Guaidó’s had “dynamited” itself.

These examples show that the opposition split and moving away from Washington’s political line of maintaining support for the interim president (beyond any constitutional mandate), which has been rejected by several opposition sectors.

In recent months the Venezuelan Supreme Court has intervened in a host of parties, opposition and Chavista alike, naming ad-hoc boards. These decisions, arbitrary as they may be, assure that the most well known political parties will be on the electoral ticket. Party supporters thus have a way to express themselves and their mere voting could change the political landscape.

In short, for the first time since 2015, the electoral scenario is favored over the insurrectional one for the opposition. But we should warn about the obstacles ahead. The pandemic can mean a low participation, as can pressure from Washington’s hawks with threats of sanctions against opposition candidates (something they have resorted to in the past). Also, the infighting and end up wiping the opposition from the political map.

Regardless of the electoral outcome, we can conclude that a democratic option is opening up. To discard it, as the European governments appear to do, will have a high social cost.

US sanctions, which for a long time only targeted high-ranking government officials, have dealt a fatal blow to the struggling oil industry and deliberately blocked the country’s access to fuel. This will make for a rough situation in coming weeks with inventories running low and tension centered once more on the Iranian fuel tankers that are on the way.

The coming weeks, in the midst of a pandemic, could generate a severe crisis in terms of food and healthcare.

It is obvious that electoral results will vary considerably depending on the opposition’s level of participation and unity. If the high abstention scenario we saw in the 2018 presidential elections repeats itself, then the governing Socialist Party (PSUV), which retains a hard core of voters and a finely tuned electoral machine, will secure total political hegemony in the country and take control of the last body that it had lost in recent years.

But if electoral participation increases compared to previous contests, we could face a parliamentary map that could wrest total control from the PSUV while also weakening the radical sectors that have controlled the opposition and support violent solutions.

With Capriles endorsing the elections, the invitation of observers, the appointment of electoral authorities featuring opposition members and the prospect of the 2022 recall referendum, Maduro is putting much more on the line than he did in the 2015 legislative elections, when he suffered a crushing electoral defeat.

The opposition, in spite of divisions, could use the elections to reinvent itself, throwing out the radical figures and going back to doing politics, and projecting its goals through an electoral event such as a referendum as opposed to rushed, military solutions.