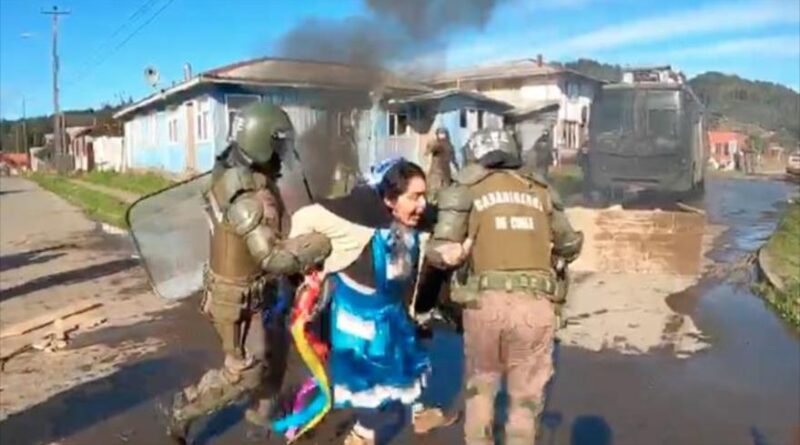 Carabineros attacked Mapuche community members who had taken over the Chilean municipality of Tirúa in support of their imprisoned leaders who are still on hunger strike.

According to a live broadcast of the eviction of the municipality of Tirúa, located in the province of Arauco in the south of the Bío-Bío region (central-south Chile), a contingent of the Carabineros special police, heavily armed, broke into the council compound in the early hours of the morning and attacked the Mapuche community members, who were scattered on the floor, with toxic gases and pepper spray.

According to reports from communities and groups, the soldiers detained at least five people, including the machi Miriam Mariñan and the Jesuit priest Carlos Bresciani. The images show how the priest and the Mapuche leader are forcibly taken away by the police.

Until now, the conditions in which the detained community members are held are unknown.

In this regard, the Company of Jesus, through a statement, said that “State violence is the clearest sign of the absence of political will to resolve the underlying problems of this people, such as their rights to self-determination, the recognition of their culture and traditions, their language, territories, and others. Father Carlos is one more, and the Society of Jesus shows solidarity with him, with the other Jesuits of Tirúa, but above all with the Mapuche People and their legitimate demands.”

For his part, the mayor of Tirúa, Adolfo Millabur, said that the neighbors had learned of the situation, saying that the eviction was carried out by order of the Arauco governor, Óscar Muñoz Arriagada. “This type of internal government decision does not help at all, because everyone knows that it. (eviction) is the power of the mayors,” recalled the mayor.

Likewise, Millabur referred to the statements of the Interior Minister Víctor Pérez, who denied a few days ago that there are political prisoners in La Araucanía. “Those who had Nelson Mandela imprisoned in his time, no one recognized his political status and he later became the president of that country. The indigenous peoples are victims of a way of implementing a State policy of repression, oppression, and that is to deny them their rights. Those who are imprisoned, for the most part are for reasons of claiming their rights as indigenous peoples,” he said.

This happened a day after the Mapuche detainees in the Angol prison stopped drinking liquids, starting a dry hunger strike, for what they described as “the null political will of the government to establish a high-level political table to guarantee the effective application of Convention 169 of the International Labor Organization (ILO) in the Chilean justice system.”

ILO Convention 169 on Indigenous and Tribal Peoples in Independent Countries is based on respect for the cultures and ways of life of indigenous peoples and recognizes their rights to land and natural resources, as well as to decide their own priorities regarding the development process.