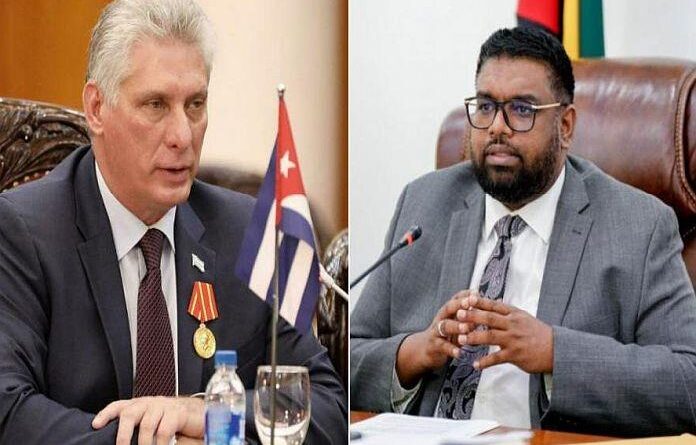 His Excellency Dr. Irfaan Ali reiterated Guyana’s support and solidarity for Cuba, and spoke about strengthening cooperation in key areas during a telephone conversation Wednesday with the Spanish-speaking Caribbean island’s president, Miguel Díaz-Canel.

President Ali also acknowledged the longstanding relationship between the two countries and their 50 years of diplomatic relations.

Guyana and Cuba established diplomatic relations on December 8, 1972. Given this milestone, he expressed optimism about a renewed sense of cooperation: “Guyana has benefited tremendously from the goodwill of Cuba and its people.”

The president also extended an invitation to the Cuban leader to visit Guyana to further bilateral talks towards enhancing collaboration that will benefit citizens of both countries.

President Díaz-Canel welcomed the invite and also expressed the need to strengthen the bonds between the two nations. To this end, the discussion centred on several areas including tourism and hospitality, health, housing, and food production.

President Ali also spoke of the need to enhance Guyana’s social sector and pointed to his quest of providing quality health care.

In this regard, he noted that Guyana will be constructing a new maternal and child health hospital and six new regional hospitals.

The leaders spoke about Guyana’s development path and President Ali outlined some of his government’s plans to diversify the local economy, including through agriculture. He also highlighted Guyana’s leading role in CARICOM in reducing food importation by 25% by 2025.

“We are working on a massive diversification and food security plan,” said Ali.

The leaders agreed that discussions will advance through their respective technical teams.