Latin America continues to lead over the rest of the world in parliamentary gender parity.

Cuba, Nicaragua and Mexico have been ranked 2nd, 3rd and 4th in the world, having achieved the highest proportion of women in parliament out of 189 countries. What’s more, these three along with Rwanda and the United Arab Emirates are the only five countries in the world to have achieved gender parity in their lower or single legislative house (National Assembly, Congress, or Parliament) as of February 2022.

The Inter-Parliamentary Union (IPU) released its 2021 Women in Parliament report of countries with the best gender balance in parliament this week. Cuba, with 53.4% of women holding seats in the National Assembly, ranks second worldwide, followed by Nicaragua, which with 50.6% of its National Assembly held by women lawmakers, ranks third overall in the world. In the #1 spot is Rwanda (61.3%), whose laws require that 24 seats by set aside for women.

Rwanda, Cuba and Nicaragua are the only countries in which women have more seats than men in their national parliament.

In 2021, the region of the Americas had the highest share of women’s representation (33.8%), beating all five other regions of the world. Europe as a region, sits nearly three points behind the Americas with 31.1%.

It’s important to note that while three countries of Latin America have reached or surpassed gender parity, in addition to one country in Africa and one in the Middle East/North Africa region; no country in Europe has achieved equal representation of women in their governing bodies. The closest Europe comes to gender parity is in Iceland, which ranks #7 with women representing 47.6% of the parliament. 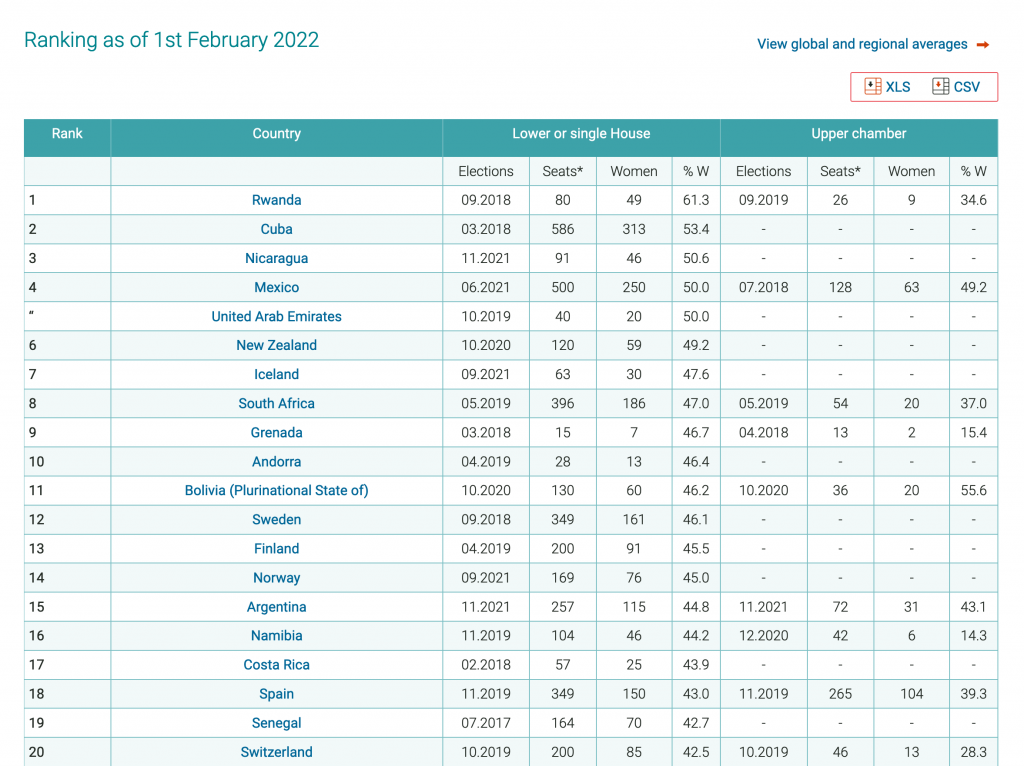 Despite the successes in Latin America, the top-ranked region has its average brought down by the poor performances of the United States (27.9%) and Canada (30.5%) who can be found far down the list, ranked at #72 and #59 respectively.

RELATED CONTENT: The Gains of Nicaraguan Women During the Second Sandinista Government

In 2021, Nicaragua elected the highest percentage of women out of all 44 countries that held parliamentary elections. 46 women were elected to the country’s 91-member National Assembly. The Constitution mandates equal representation of women among candidates and also requires parties to alternate between women and men on their candidate lists. Women have accounted for more than 40% of elected parliamentarians in Nicaragua since 2011.

The IPU’s monthly ranking of women in national parliaments can be found here.

The Inter-Parliamentary Union’s Women in parliament in 2021 report can be downloaded below.