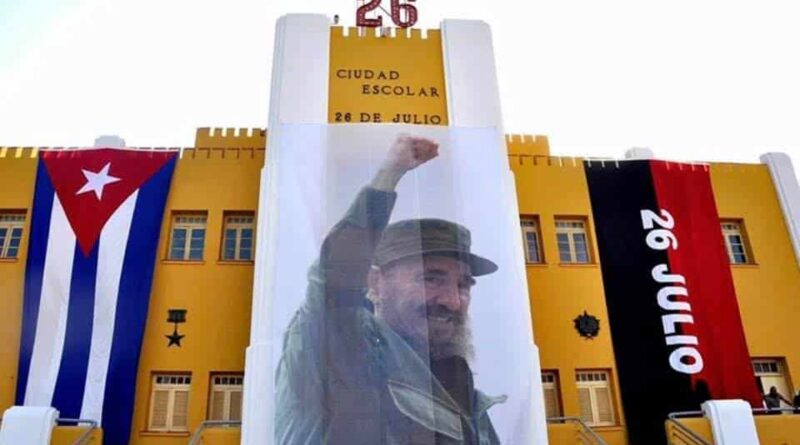 The following article by Sam Marcy, a leading Marxist thinker and fighter of the second half of the 20th century, was originally published on Sept. 30, 1993, during an earlier imperialist offensive against socialist Cuba.

Of the great revolutions of the 20th century, including those of the USSR and China, the Cuban Revolution has been subjected to the most onerous siege of all.

It is true that in the early days after the victory of the October Revolution, the Soviet Union was encircled and invaded in a siege unparalleled in all previous modern history. But soon it did have the great advantage that there were revolutionary developments — indeed unprecedented proletarian struggles — in Germany, Hungary, France and all over Europe, including a general strike in Britain.

All this helped lift, at least in part, the siege imposed by the imperialists.

Soon after the victory of the Chinese Revolution in 1949, when the Chiang Kai-shek clique was finally routed and had to take refuge in Taiwan, the Sino-Soviet agreement was concluded. This historic treaty between the two great socialist countries put the imperialists on notice that China would be defended in case of aggression by the U.S.

Of course, none of this stopped the imperialists from provoking a struggle on the Korean peninsula and beginning a siege of Korea that has lasted to this very day.

Cuba, however, has had none of the great advantages enjoyed by the USSR, China or the DPRK — each of which has had socialist allies on its borders.

Indeed, only 90 miles away from Cuba is the colossus of U.S. finance capital and its vast military establishment. It takes an enormous amount of fortitude, unmatched determination, sheer grit and perseverance to hold on and move forward with the revolution, as has been done in Cuba.

All this describes the qualities of the popular and heroic leader of the Cuban Revolution, Fidel Castro.

RELATED CONTENT: Russia Blasts US Bid to Provoke Unrest in Cuba as Part of ‘color revolution’

Eisenhower, Nixon and Kennedy
In March 1960, just a little over a year after the triumph of the Cuban Revolution, President Dwight Eisenhower secretly approved a CIA plan to invade the island. The idea was to use U.S.-trained Cuban mercenaries as a cover for Yankee aggression.

The Cuban revolutionary leaders soon knew of the plan. They publicly warned the people that an invasion was coming.

That was in a presidential election year. Eisenhower’s vice president, Richard Nixon, was running against John F. Kennedy. You would think there would have been public debate in the U.S. on the advisability of an intervention in Cuba. Wouldn’t a so-called free press itself be a participant in molding public opinion on this dangerous military initiative from the Pentagon?

But the historical record shows that the debate in the U.S. media at that time was not about Cuba at all. It focused almost completely on China — whether the U.S. should intervene to prevent the People’s Republic from recovering two little offshore islands, Quemoy and Matsu.

It was altogether a false issue. Both the outgoing Eisenhower-Nixon administration and the incoming Kennedy administration deliberately conjured it up in order to divert public opinion from what they were planning for Cuba.

Nixon and Kennedy were vying for advantage in the eyes of bourgeois public opinion, trying to out-hawk each other in condemning Cuba. At the same time they cooperated in remaining silent about the actual planning for the invasion. Such is the nature of Republican-Democratic bipartisan politics.

The invasion of April 1961 ended, as the whole world knows, in a humiliating defeat at the Bay of Pigs for the CIA and its lackeys.

The Bay of Pigs disaster was not merely the result of a military miscalculation, although that may have happened, too. The imperialists’ political miscalculation was far greater.

The Eisenhower and Kennedy administrations failed to understand that what they faced in Cuba was not just another political change. They had experienced many political changes in the history of Latin America. But none had been a true social revolution.

This was what was new about the Cuban Revolution. It was not just a change of the superstructure but of the class structure itself. It was a revolution against the landlords, capitalists and foreign owners of the vast wealth of Cuba.

RELATED CONTENT: Cubans Demand Respect for Sovereignty & Self-Determination With Which They Decided to Build Socialism

New form, same old content
How much have U.S. imperialism’s plans for Cuba changed since the debacle at the Bay of Pigs? They differ widely in form — but not in content. The effort to overcome and destroy one of the most profound social revolutions in history goes on unabated.

Today’s method is not to use naked, open predatory force. It is to carry out a disguised yet equally deadly economic strangulation.

Both in spirit and substance, the Clinton administration is continuing the policy the earlier Eisenhower and Kennedy administrations pursued.

Instead of a blatant, predatory military attack, the imperialists are pursuing the same goals through the use of the vast economic power of the U.S. in order to strangle Cuba economically.

A nation proves its true worth when it can fall back on its own inner resources in the face of overwhelming odds. Cuba has done that splendidly for so long. But the siege of Cuba has lasted much too long, even if it were a larger nation with many more millions of people in it.

All this underlines the very urgent need for international support. This international support can and must come above all from the United States. This is of the greatest urgency: a reawakening of the U.S. working class to its responsibilities in the face of the monstrous character of this attempt to strangle the Cuban Revolution.

One must hope for and continue to work ceaselessly and relentlessly to awaken the tremendous potential inherent in the U.S. working class to carry out its international responsibilities to the besieged Cuban Revolution.

There can be no greater act of international class solidarity than to energetically defend the Cuban Revolution against blatant, predatory U.S. imperialism.

Featured image: Building with a banner of Fidel.