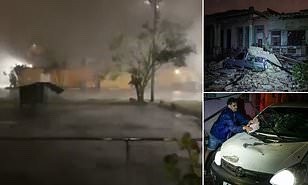 Gusts of winds of more than 62mph tore through parts of Havana around 9pm on Sunday, bringing heavy rain and hail.

Witnesses described the event as if there was an airplane trying to land in your houses front yard.

Tornado’s are rare in Cuba, and this was the first twister to hit the capital in decades.

The full magnitude of the damage is not yet known, however photos and video footage posted on social media by Havana residents show the destruction the tornado has left in its wake.